Cate Hall defeated Mike Dentale two games to zero in one of the most anticipated poker heads-up matches since Mike McDermott and Teddy KGB.

The poker players settled a dispute on Poker Night in America on Sunday at Sugar House Casino in Philadelphia. 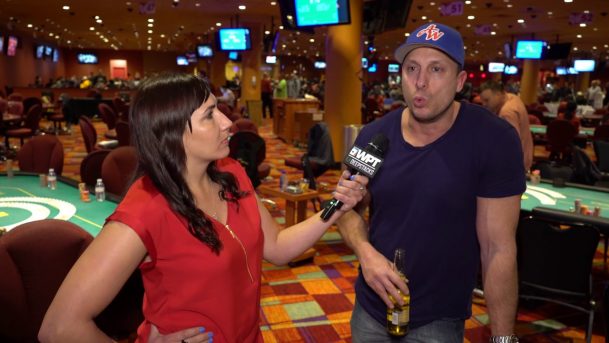 Dentale, a political polar opposite to Hall’s liberal views verbally attacked her on Twitter back in December for a poor play in a WPT event. She took it personally and challenged him to a heads-up match.

The two fired insults back and forth for days. Things got nasty between these adults on social media. After days of personal attacks and claiming the other sucks at poker, the duo finally agreed to settle things in front of a live audience on Twitch.

That brought us to Sunday’s grudge match which aired live on Poker Night in America’s Twitch channel. Doug Polk and Shaun Deeb, two outspoken poker pros, were in the booth providing commentary and hand analysis.

Every poker player knows that sometimes, no matter how well you play, the cards are out to get you. Dentale, although he didn’t play a perfect game, simply didn’t get the cards. Variance was on Hall’s side.

The poker pros played two heads-up matches with $15,000 starting stacks and $75/$150 blinds. Each game concluded when one player no longer had any chips. Both times, that person was Cate Hall.

The first match was dominated by Hall. She flopped trips on the first hand and won a big pot when Dentale attempted a bluff on the turn and then fired another big bet on the river when he spiked top pair. She got off to a fast start and cruised to a first-game victory.

Dentale was critical of Hall’s playing during Sunday’s grudge match. But his words didn’t matter. Hall scooped pot after pot. She focused on winning hands. He focused on trash talking.

“Remember, you will always suck,” he said. “Especially in my eyes. There are a lot of girls that have earned my respect, but it definitely isn’t you,” he said during the match.

Less than an hour later, facing a 4-1 chip disadvantage, Dentale made a move with top pair (aces) on the turn. Hall made a quick call with her set of kings. He was drawing dead. To add insult to injury, she hit quads on the river, ending the second match.

Now that Hall has finished off Dentale, she appears ready to take on another challenger. On Twitter after the match, she asked, “who wants next?” Poker players such as Robert Mizrachi responded by accepting the challenge, but she never responded.

Dentale wasn’t gracious in defeat. He was more concerned with letting down those who bet on him to win than to compliment the play of his opponent. He also said in the post-game interview with Polk and Deeb that what tilts him the most about Hall is that she isn’t “gracious for her run good.”

She ran good on Sunday, dominated both matches, but there’s no way to shut Mike Dentale up.

He obviously sucks at poker and life in general.

“Every poker player knows that sometimes, no matter how well you play, the cards are out to get you. Dentale, although he didn’t play a perfect game, simply didn’t get the cards. Variance was on Hall’s side.”

More or less concluding that Cate luck boxed her win? That’s insulting and the write of this article didn’t basically say anything positive about Cate or her win or her skills relative to Mike Dentale. yeah, she outflopped him but he also just played terribly. Many people who bet money on Mike Dentale admitted he got outplayed. I watched the match and can tell you that variance is why Cate beat him in 200 hands or whatever it was. If it hadn’t been for positive variance it may have taken Cate 600 or 800 hands to finally beat him. But….luck….