Jeff Platt has been a busy man this July. The former sportscaster and current poker broadcaster has played in every WSOP Online Series No-Limit Hold’em bracelet event and has also been broadcasting the action all the way down to the final table every night on his Twitch stream.

His livestreams have been a hit, averaging roughly 770 active viewers and 7,900 total views per night since July 1. They begin at 10 pm PT every evening and stay live until the final table, when he sends it over to the WSOP broadcast team. 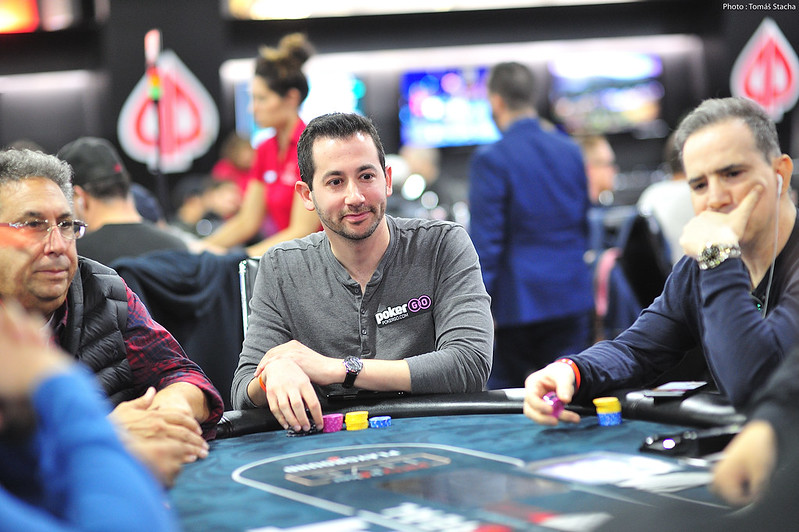 Jeff Platt in action at the poker table. (Image: WPT.com)

Platt’s nightly Twitch streams have also received acclaim from the likes of Daniel Negreanu, Phil Hellmuth, and Matt Berkey. Negreanu tweeted out a video of himself watching Platt’s stream and even hopped into the chat while he was making his deep run in Event #2.

Before relocating to Nevada, one of two states currently allowing competition in the WSOP Online Bracelet Series, Platt’s career as a broadcast journalist had him covering the Dallas Mavericks for ESPN Radio and then working as a TV sports reporter in San Antonio covering the Spurs.

In 2018, he decided to merge his passions for poker and broadcasting, moving to Las Vegas where he took a part-time gig as a PokerNews reporter. Since then, Platt has earned time in the booth doing play-by-play for events such as the Super High Roller Bowl Bahamas and the WPT Five Diamond World Poker Classic. He also hosts the PokerNews Podcast with Sarah Herring and Chad Holloway and the poker trivia game show “The Big Blind” on PokerGo.

On July 7, Platt’s worlds as a poker player and a Twitch streamer collided when he made a deep run in the $800 Knockout Deepstack Bracelet Event #7. He streamed his tourney (on a five-minute delay) and made it all the way to the final table before being eliminated in 7th place for $15,057 (including bounties).

We had a chat with Jeff about his transition into poker broadcasting, his recent success on Twitch, and his experience as a player in the 2020 WSOP.

CardsChat: You started as a sports reporter in San Antonio, and have spent the past three years as a poker broadcaster in Las Vegas. What are some adjustments you had to make?

Jeff Platt: I feel like in some sports broadcasting roles, you’re very limited in the time you have to tell a story. The stories are told in produced segments, and required to fit into a certain window. In poker, it almost seems like the story develops over the course of a tournament, and you have an extended amount of time to tell that story.

As opposed to the rush of, say, an NBA game, there’s more downtime in poker tournaments to dive in on certain stories and sidebars. So I’ve slowed myself down, tried not to fit too much in a certain window. But it’s still incredibly important to bring the excitement and the drama of the moment to the hands that deserve it.

CC: Did you experience a culture shock moving from San Antonio to Las Vegas?

JP: Not really. I’ve been to Las Vegas so frequently over the last 10 years or so, it almost felt like a second home. What surprised me the most when I moved here was how much Vegas feels like a normal city outside the Strip. I live in Summerlin, and couldn’t be happier.

CC: When you and Brent Hanks were in the PokerGo booth covering the PartyPoker Super High Roller Bowl Online Series, it was strange seeing digital graphics of the players instead of live action we’ve become accustomed to for this event. How is live play-by-play different from coverage of online events?

JP: The amount of preparation I put in for these online events has increased, that’s for sure. Without hearing from the players at the table, the broadcasters have more time to fill throughout the tournament. We never want to cover every single hand, as that would simply be too boring. So I like for us to have a deeper list of topics to explore during a downtime in the tournament. We have a terrific production crew at Poker Central, special shout out to Saum Eskandani for creating in-depth bios on each player. This step greatly enhances my preparation efficiency.

As far as techniques are concerned, I try to bring the same level of excitement that I do to any live broadcast. It sounds a little different, perhaps a little more awkward with absolutely no background noise, but I still think it’s necessary for these high roller tournaments with millions of dollars on the line.

CC: Your Twitch streams from this month’s WSOP online bracelet events have been a hit. What led to your decision to start broadcasting WSOP online event coverage on Twitch?

JP: I busted the first event of [this year’s] WSOP, was laying on the couch while sweating the live updates, and saw that Phil Hellmuth was making a deep run. The WSOP.com software doesn’t allow anyone outside of Nevada or New Jersey to observe its tables, so I wanted to give people a chance to sweat the 15-time WSOP bracelet winner. I decided to stream his table on my Twitch channel.

And after the insane reaction it received, I saw the opportunity there to allow people to watch the World Series of Poker Online as each tournament played down to a final table. It didn’t hurt that Daniel Negreanu made a deep run the next night. He not only promoted the stream, but also showed up in the chat! I think both pros and fans have enjoyed this kind of coverage, and I’ve been thrilled with that reception.

CC: Last week, your regularly scheduled broadcast was replaced by coverage of yourself making a deep run in WSOP Bracelet Event #7. By the time you reached the final table, the stream had over 2,000 viewers.

JP: I’m not sure I can put into words how much I enjoyed that experience. There’s something magical about a World Series of Poker event, live or online. To combine that aura, that mystique, with a massive virtual rail set up such memorable moments.

The support of the poker community has been so incredible, it really does mean a lot to me. I would’ve been thrilled with 200-300 viewers after looking at the numbers for our first week of WSOP coverage. To have more than 2,000, is something that still stuns me. I can’t thank the viewers enough.

CC: Does streaming affect your decision-making while playing? Do you feel any additional pressure? Do you avoid making moves your viewers might question?

JP: Broadcasting helps my decision-making process. It’s important to me to talk through every single hand, for the sake of the audience. That, of course, allows me not to take any spot for granted. It’s interesting, I was really nervous through the hour of play before the stream started, as we started to get deep in this tournament. Once I started streaming, I just felt so much more relaxed. 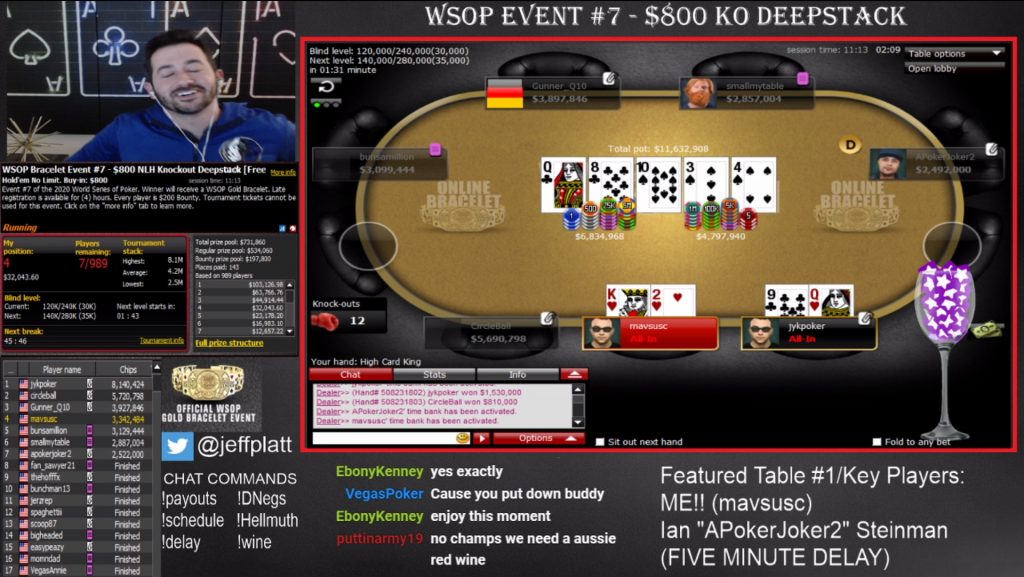 Platt calls for 3.1 million more in the big blind and is ahead of Q9, but is eliminated in 7th place. (Image: Twitch.tv)

I don’t feel any outside influence or pressure to make any “heroic” moves, and I honestly don’t care if I make a “mistake” in front of people. If my poker play is being criticized, it’s not going to bother me. I’m not going to pretend like I’m a wizard with all the spots figured out.

CC: What was your thought process behind calling Joon Kim’s (“jykpoker”) all-in shove from the small blind with K♥2♥ in your elimination hand?

JP: This interview was going so well, and then you had to torture me [laughter]. It’s a great question. A couple of things. I know jyk is a competent player, and therefore shoving almost any two in that SB spot. With the tournament playing so shallow, I felt like I needed to take any small edge. There wasn’t a super short stack to wait out for a pay jump, so I was effectively at the bottom of the leaderboard. Plus, while ICM is certainly an important element of the tournament to me, I really wanted to play for the win and that beautiful WSOP bracelet.