Interview: Owner of Raided Cali Poker Room Says She Operated Within the Law

A California poker room owner whose casino was raided by the state’s DOJ on Tuesday told CardsChat News she believes she was acting in accordance with the law and thought she was being robbed when police entered the property. 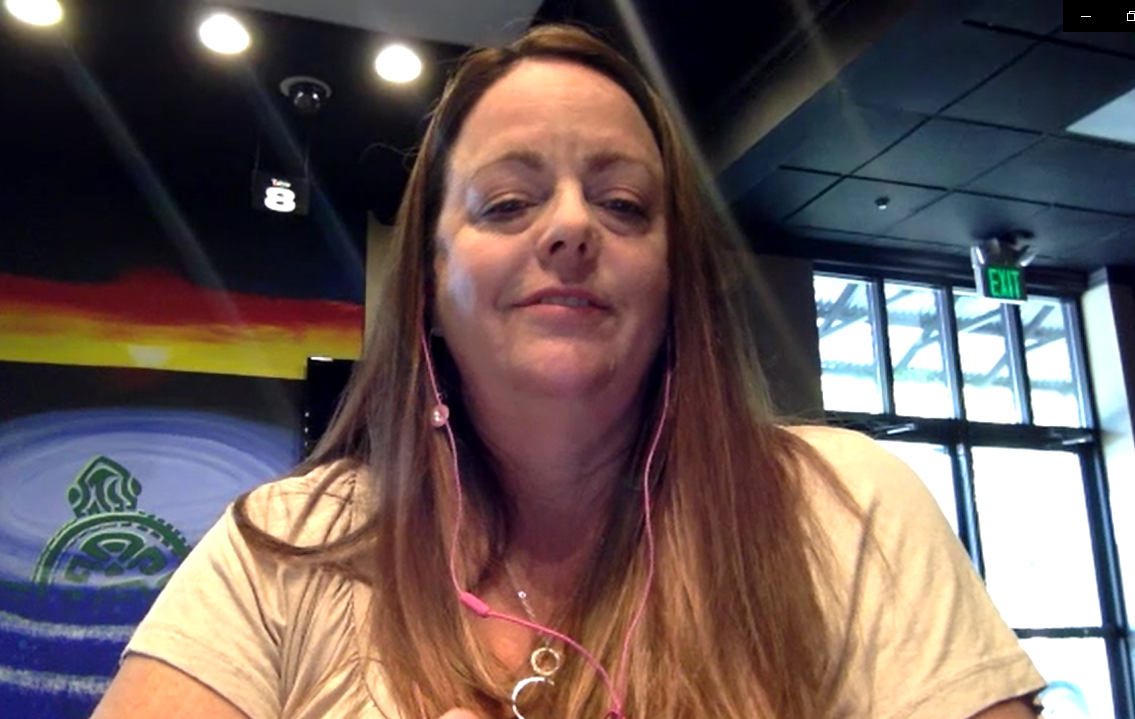 Jamey Robinson, back under quarantine and telling her side to CardChat reporter Jon Sofen. (Image: Zoom)

State police shut the game down without incident and made no arrests. But Jamey Robinson, owner of the Towers Casino in Grass Valley, California, isn’t resting easy after the raid.

Six armed agents arrived at Towers Casino Tuesday evening, around 8 pm, and forced all patrons to leave. One table of poker and one table of blackjack were running at the time.

Robinson says she was confused at first.

“I thought I was being robbed,” she said. “I didn’t know who they were. It was scary.”

Brandt Jeffrey, a Towers Casino poker dealer, shared a video of the DOJ raid on Facebook.

In the 2 minute video Robinson makes her case for how she was operating within the law and apologizes to players for their game being interrupted.

“This is an outrage,” Robinson declared. “There’s less than 20 people in here right now, less than 15. This is unconstitutional. I’m shocked.”

“Can we play tomorrow?” the player in the 9-seat asked.

The answer was no.

Poker Room Operator: ‘I Acted According to the Law’

Robinson said in an interview with CardsChat News that she wanted to clear matters up following the release of the video. She said the video was taken a bit out of context and her actions were based on the heat of the moment.

The card room owner insists that she had no idea the gaming commission had any problem with her being open. She claims to have been in communication with gambling regulators and had informed them a week ago that she would be opening this week.

“I notified them that I was opening. They had a week to respond to me, and there’s been nothing written about not opening,” she says. “I’m surprised they haven’t sent a mass message out to all card rooms saying, ‘you cannot open.'”

Grass Valley, a small community in Northern California about two hours east of San Francisco, has just one poker room — Towers Casino. That 6-table card room has been closed down since mid-March due to COVID-19.

Robinson decided to reopen her casino on Monday after receiving information that led her to believe doing so was legal, she says.

“I had been going on with my daily life like you all have, sheltering in place,” she said. “On May 11, I got a notice from the Nevada County [California] Environmental Health Department saying, hey, we’re in Stage 2, you can open your doors again, here’s a bunch of forms you need to fill out.”

The California poker room owner said she had been informed she would need to participate in a health safety meeting. But she also claims that she was told she wasn’t required to attend the meeting prior to opening.

“You’re cleared to open on May 12,” she said the letter she received on May 11 stated. “So, I registered my name, I registered my email. Clearly, in my email, it said what type of business we’re in … When I was sent the guidelines, I just thought they sent it to me giving me permission to open.”

California’s Democratic Gov. Gavin Newsom has yet to permit reopening of commercial casinos in the state, which has been under a stay-at-home order since mid-March. (Tribal casinos are allowed to open due to their sovereign land status.)

As of Wednesday, Newsom’s reopening plan had reached Stage 2, which allows for lower-risk workplaces, such as retailers, to begin offering curbside pick-up. Other businesses allowed to open include manufacturing plants, outdoor museums, and personal services such as barbershops and nail salons, so long as they follow stringent guidelines.

Recreation and entertainment venues are included in Stage 3, which so far, has no date attached to it. Smaller poker rooms such as Towers likely would be part of that, but it’s not clear if larger casinos would have to wait until Stage 4, which is when nightclubs and live-audience sporting events are slated to return.

Located in northern California about two hours east of San Francisco, Nevada County has 41 confirmed COVID-19 cases from its population of just under 99,000. They have had one death so far.

Robinson wasn’t trying to hide her plans to reopen. She was confident enough in her legal right to do so that she publicized the card room’s reopening on social media. But soon after she invited customers back to Towers Casino, she was greeted by some unwelcome guests.

“About four hours after opening (on Monday), [the] Grass Valley Police Department came by and asked if we were open, and why we were open,” the California poker room owner recalls. “I explained the situation. I have a binder that I pulled together with all the health safeguards, the letters from Environmental Health, and showed him that I met every criteria that they asked me to meet to reopen.” 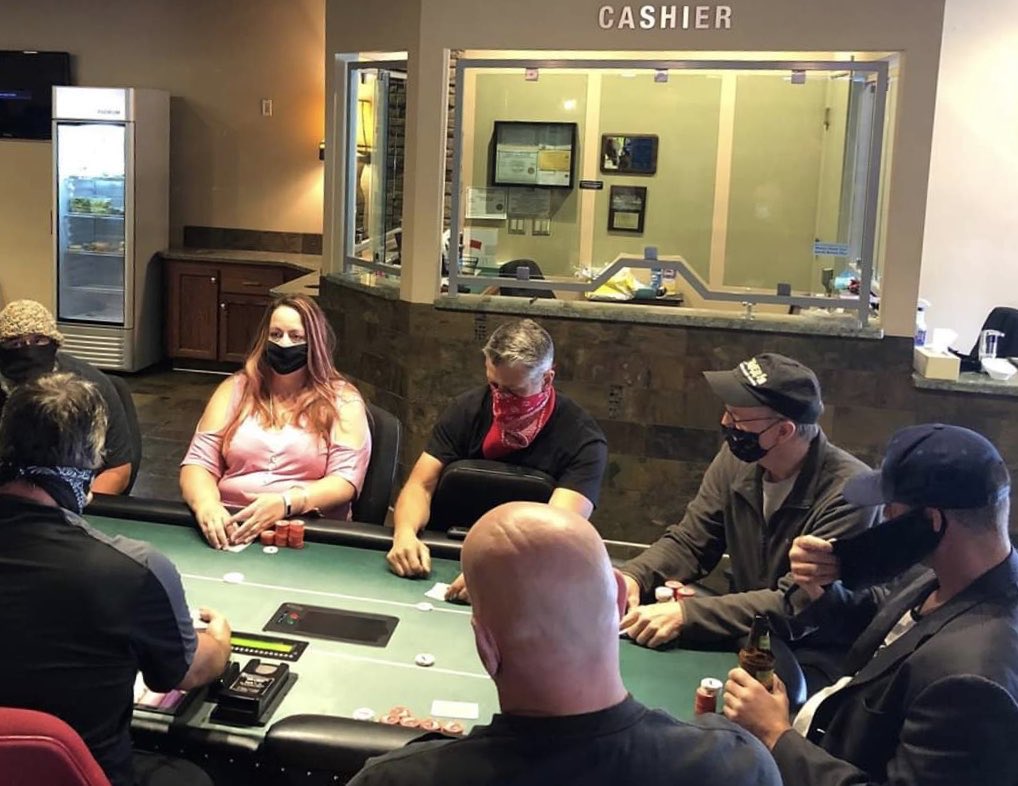 The police officer, she says, was cordial and gave her no indication that she was potentially breaking the law. But he informed her that he would need to communicate the situation with his boss and “get back to me on Tuesday.”

Towers had one low-stakes, no-limit hold’em game running, and continued operation throughout the evening. A new game started on Tuesday, and not much later authorities got back with her — though not in a way she imagined.

Robinson says she’s “95% positive” one of the DOJ’s field agents visited the casino undercover prior to the raid. She said an individual who looked like one of the agents who later arrived in armed gear came by earlier in the day asking questions and looking around.

“If at any time, he would have shown a badge or a card and said ‘you cannot be operational right now,’ we would have closed down,” Robinson says.

Robinson says that while bars have remained closed, restaurants there have opened with restrictions of 10 guests per table. Her game was running nine-handed.

Prior to our conversation, Robinson met with her attorney. She isn’t currently facing charges, but admits she is concerned about her gaming license as she has yet to hear from state gaming officials. Her business depends on that license remaining in good standing.

She says she has already sent the gaming commission a letter Wednesday informing them about the incident.

were the players allowed to cash out?

I’m sure they were. This is just ridiculous bullshit because as far as I know the Indian Casinos were going to reopen and gave Newsome the finger.

This is yet another reason why California is known as a “Shithole of America!” Along with Indiana!

It’s all great and fun jumping back on a table..until you find out one of the players tested positive for the “RONA”..then its panic time..running to the nearest site that’s doing testing… having to quarantine you and your entire household and fellow employees at your workplace…but isnt this place usually hosting a bunch of old fogies?..most of them over 60?? Well that’s definitely a new meaning of “ALL IN”..card rooms are probably the worst breeding ground for the virus to spread…your all touching the same cards continuously and sitting very close to each other breathing the same air and microisms….if one person on the table has it trust and believe your all getting it..