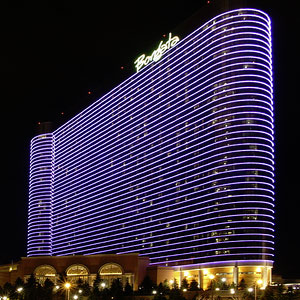 Borgata’s Chief Executive says Internet gambling in New Jersey is and will be a positive development for land-based gaming.

Tom Ballance is the President and Chief Operating Officer of the Borgata Hotel Casino & Spa in Atlantic City, New Jersey. He recently appeared on the CNBC television show “Squawk Box” to discuss the company’s experience thus far with online gaming in New Jersey.

Ballance was quite positive about the expectations, which he claims have already been exceeded for the Internet gambling market in the state. He also mentions that the endeavor has done no harm to land-based casino operations and will merely compliment the revenue. Balance’s overall positive outlook on the industry and the Borgata’s part in it was a boost for the market on a nationally televised level.

“Borgata was uniquely positioned to be right at the forefront, primarily because of the efforts of our managing partner, Boyd Gaming Corporation,” he told the panel on CNBC. He went on to say that the partnership will assist the company in moving toward the goal of offering online gaming on a nationwide basis, which is something that Borgata has not been particularly forward about in the past. However, its success in New Jersey and quickly working with PartyPoker to become the market leader in the state has provided a newfound confidence for Borgata.

The partnership with Boyd was a bonus, added Ballance. He confessed that Borgata would have gotten involved in the Internet gambling market in New Jersey regardless, but the option of having Boyd Gaming as a service provider already in place made it easier. “We were all set up and ready to go.”

Internet and Land-Based Gambling Compliment Each Other

The obvious question for the interviewer to ask was if online gaming does any damage to brick-and-mortar casinos and their customer base. Physical customers in the casino not only gamble but also frequent the bars, restaurants and other hotel offerings, so the idea that Internet gambling might detract from that base is not a unique one. Ballance responded, “When we match up databases, the great majority of players who were playing online have not been to Borgata in well over a year. And the vast majority has made fewer than two trips in the past year. So it’s a different customer.”

Ballance also discussed the so-called dangers of online gaming that opponents touted prior to the regulations being put in place and the sites having launched. He claimed that the customers are easier to track with the online database. “Online, we actually have more controls than there are in brick-and-mortar. You don’t extend credit online. You’ve got to fund your account somehow; you’ve got to fund it maybe through your checking account or through a credit card, and you’ve got credit card limits and checking limits. We know every bet you’re making online; there’s no way to come into a casino and be unidentified if you’re gaming online.”

Poker was pointed out as the most popular game, especially for those who want to compete against others. “A lot of the poker players also cross over and play in the casino during their session,” Ballance noted. And while most land-based casinos consider poker to be a game that doesn’t add much profit to the bottom line, the Borgata boasts of a great poker playing base in its casinos, which has translated to the online business.

the truth is that land based usa casinos killed internet gambling because the money was going overseas.

now that they have control they want to build it back up.

this is how the usa really works now…if you can’t compete you change the laws with bribed politicians.