Doug Polk shared some “sad news” that rocked the poker community (okay, not really). Daniel Negreanu blocked the poker pro turned cryptocurrency champion on Twitter this week, which spurred a sarcastic video retort from Polk — mocking the Hall of Famer and PokerStars ambassador for not engaging with his ongoing gripes about one company’s business decisions. 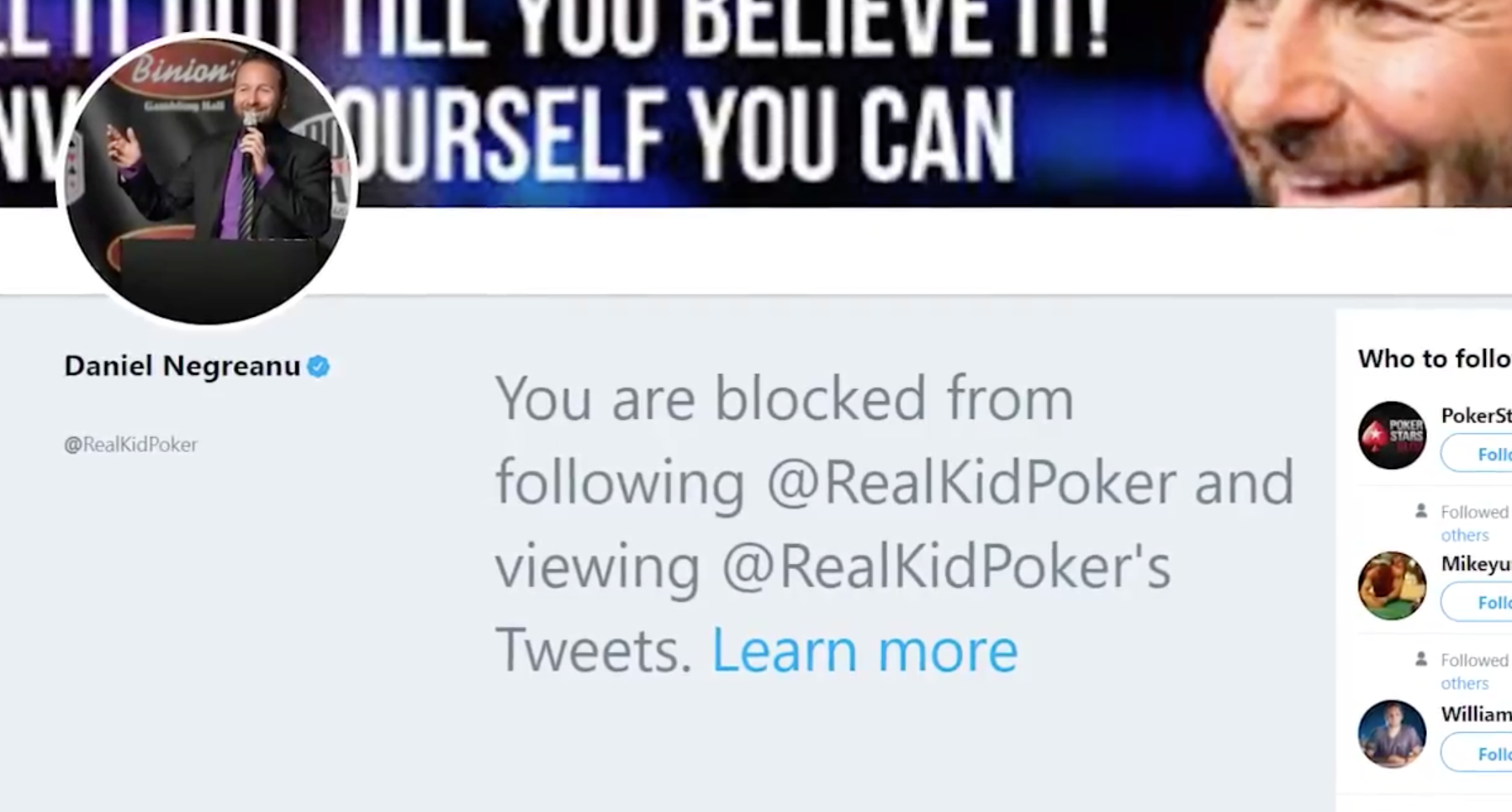 Doug Polk faced a rude awakening on Twitter when @RealKidPoker decided to cut off what some might argue was harassment. (Image: Twitter/DougPolkPoker)

The feud between the poker greats began over a year ago when Negreanu did what nearly any high-paid employee in any industry would do: defended the company he represents.

When PokerStars eliminated its popular rewards program that benefited the pros such as Polk in favor of a system geared towards attracting casual poker players, Negreanu defended the change, which, as many things do, irritated Polk.

His expression of disdain for poker’s all-time winningest tournament player has continued, and a truce doesn’t appear in sight.

When Negreanu uttered the phrase “more rake is better,” Polk mocked the claim on his popular YouTube channel. After Daniel then denied saying that, Polk proved him wrong by showing his followers the clip of him making the comment.

Fast forward a year later and Polk has refused to lay off Negreanu and recently referred to him as “an embarrassment to the game of poker.”

Negreanu rarely responds publicly to Polk’s criticisms, but that hasn’t stopped Polk from continually trashing DNegs on Twitter and YouTube. It’s gotten to a point where a large portion of his poker-related social media posts are anti-Negreanu, such as this one from Thursday that mocked Negreanu’s vegan lifestyle:

“My mom, who has worked in the medical field for 30 years, was discussing that hospitals are limiting carb, not meat, intake for cardiac patients to help w/ high cholesterol,” Polk tweeted. “Its disheartening to me top doctors in the world haven’t taken the time to read Negreanus Twitter rants.”

Polk’s obsession with Negreanu has become as regular as Donald Trump’s continued tirades about Hillary Clinton.

Negreanu apparently had enough, and earlier this week @RealKidPoker officially blocked @DougPolkPoker, which prompted this short video response (featuring a cameo appearance by a CardsChat article about the topic of rake):

While the video is typical of the talented Polk — sarcastic and funny — it’s another example of a feud that has become as petty as Trump’s repeated attacks on a woman who should no longer be relevant to him.

Can’t We All Just Get Along?

Polk may despise PokerStars, a site he once used to build a large bankroll, for turning its back on the pros in favor of the recreational players. But that doesn’t mean he should take out his anger on Negreanu every time he defends the latest Stars Group move.

But it’s also unfair to expect a de-facto company spokesman to publicly trash their employer’s decisions. Would a general manager at Olive Garden take to Twitter to rip the company for increasing the price on its yummy ravioli di portobello? No, because that person would soon be unemployed.

Negreanu has $36 million in lifetime tournament winnings and lord knows how much from cash games. So, he doesn’t rely on his PokerStars income as much as an Olive Garden manager does. But he’s paid handsomely by The Stars Group and it’s unreasonable of Polk to expect him to criticize major decisions the company makes.

Oh god. How rigged in Negreanus favour you gotta be dear author.

Any highly paid emolyee would do? LOL
He sacrificed his whole renome that he has been building up long years just to make a few extra dollars, which he doesnt even need to keep his life running – dont forget that he is, was and will be a millionaire even without being sponserd by pokerstars. Not to mention that you forgot to say that he owns part of pokerstars.

I dont understand those Negranus ass lickers just defending him no matter what BS he says and no matter how he tries to lie to the community about how great changes are happening, when in fact, everything they did is worse.

How is the new system favoring recs above regs lol? the new system is BS! Rec cant buy anything, cant use anything, because he just drops a few starcoins which are worth 1 cent, so its absolutely senseless to say that it is better for the recs. The recs havent been receiving anything in the past and are receiving the same nothing now. That will not change.

On the other hand they destroyed a working system that could make somebodys lives in favor of their wallets, which is understandable, but absolutely unnaceptable on the other hand.

We, as poker players, should stick together, and defend our terms and conditions! Not ass lick some pro who will sell his mother for a few bucks. remember that.

The companies and rooms need US, we dont need THEM!!

So stop being rigged in Negreanus favour because he is your darling and start actually listening to what the guy is saying. He is doing YOU bad, and not only you, but to all the comunity.

If My mother told me to kill somebody and told me that it is good, I wouldnt agree, and its my MOTHER!!

Dont be rigged in favour of somebody you dont even know and stand up for the community.
Thanks

Thanks for the response but I’m not a Negreanu shill. I don’t shill for anyone.

I like Polk. I love his videos. But he’s being petty here.

As for Negreanu, if we’re being honest here, there probably isn’t a person in history who has meant more to the poker community than him. Maybe you could argue Hellmuth or Doyle have meant more but that’s about it.

He’s brought so many people into the game. The recs love him. More recs is good for poker’s ecosystem. He also promotes numerous charities and uses his poker stardom to help raise money for important causes. It’s unfair to only mention the things he says you don’t like without bringing up all the good he’s done.

Now, is does Negreanu’s shilling for PokerStars get annoying? Of course it does. If you read the article, you know I called him out for lying about what he said about rake.

Polk is one of my favorite poker players. His videos are great. He’s done some great things for poker. But this feud with Negreanu is petty. Sometimes, you have to call people out. This is one of those times.

Negreanu is a shill. He’s paid to be a shill. I don’t think he has a lot of say on what PokerStars does with its rewards program or the price of rake. The anger should be directed towards Stars Group for screwing over the pros and now the micro stakes players, not DNegs.

What kind of biased writing is this? Stay on topic– this is not about what Negreanu or Polk had contributed to the game… Negreanu is defending a rake increase which makes low limits virtually unwinnable. This is bad for the poker economy as a whole.

It’s sad that a poker player who climbed his way through the ranks is making it virtually impossible for anyone else to do the same. But I guess he is a high paid employee so he should defend his employer’s actions. I hope they don’t pay you a lot at Cardschat, because I don’t think we would have any chance or receiving relevant, unabiased, journalism.

I have no bias. I like both Polk and Negreanu. They’ve both done a lot for the game.

I also am not a PokerStars homer. I can’t even play on there since I live in the US. I don’t like what PokerStars has done. I just think the constant bashing by Polk has gotten petty. It’s my opinion. He’s still one of my favorite players though.

But I think the real anger should be directed at other poker sites for allowing PokerStars to basically become somewhat of a monopoly instead of Negreanu.

I agree that DNegs’ shilling for PokerStars when the decisions PokerStars makes is bad for poker players. But if the other poker sites stepped their game up, PokerStars wouldn’t be able to get away with the things they do.

PokerStars is just taking advantage of the fact they control about 70% of the market.