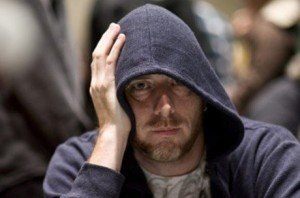 Christian Lusardi, whose behavior at the Borgata Winter Open in January set the tone for a shady old year in poker.

We like to think that this game of ours has come a long way since the days when players were terrorized by cheaters and robbers in smoky back room gambling dens.

Yet 2014 had its fair share of shady happenings taking place. In fact, the amount of scandals that hit this year was nothing short of, well, scandalous. Here’s a whirlwind tour of the sinister side of the poker world and the biggest poker scandals of 2014.

Welcoming in the New Year was the Borgata Cheating Scandal, in which a goofball by the name of Christian Lusardi decided to introduce his own chips into the mix at the Borgata Winter Open Big Stack NLH event.

The tournament was halted as soon as the rogue chips were spotted, and suspicion soon fell on Lusardi when he was caught attempting to flush T2.7 million in poker chips down the toilet of his hotel room at the nearby Harrah’s Resort, the act of a desperate man.

Lusardi’s shenanigans clogged the pipes and caused water to drip down into the rooms below. Yep, chances are it’s that guy. This prompted jokes about throwing away chips chasing flushes, and splashing the pot, etc, etc. But it wasn’t really very funny because the tournament was ruined.

Around the same time, the poker media was stunned by the revelation that one of their own was also at it. Jay “WhoJedi” Newnum, a respected and well-liked poker reporter and photographer, was busted stealing chips at Foxwoods. Newnum used sticky-coated chopsticks (no less) to fish out and steal $700 worth of poker chips from a poker dealers’ toke box during a tournament.He has since bid adieu to the poker world.

Next on the list of 2014 cheaters, the dastardly Ali Tekintamgac, who has long been suspected of employing fake bloggers to spy on opponent’s hole cards and then signal their values to him, finally got his comeuppance this year. Tekintamgac was jailed for three years and five months by a German court after pleading guilty to being the head of a cheating ring that spanned several countries.

Meanwhile, UK bracelet winner Darren Woods was also in court facing charges of poker cheating and fraud. Woods was outed as a cheater on the TwoPlusTwo forums back in 2012 after scamming players out of hundreds and thousands of dollars through his nefarious collusionary activities. Criminal prosecutions for cheating have been rare to date, so it’s good to see such things being taken seriously by the justice system.

I Fought the Law…

There were other high-profile arrests, too, such as that of WPT winner Vadim Trincher, who was sentenced to five years in prison for his role in organizing a large-scale racketeering and money laundering operation with direct ties to the Russian Mob.

He was arrested back in 2013 along with several other well-known poker players, many of whom were involved in a high stakes poker game and sports betting syndicate that has links to the operation.

Speaking of high-stakes poker games and betting syndicates, Malaysian poker player and businessman Paul Phua was busted, along with seven men and one woman, and accused of operating an illegal World Cup betting operation out of three luxury suites at Caesars Palace.

The group was nailed when FBI agents posed as internet repairmen in order to gain entrance to the suites and gather evidence.

Phil Ivey, who has had a court case or two to deal with himself this year involving some multi-million-dollar edge-sorting shenanigans, continues to fight the accusations and the lawsuit brought against him by the Borgata and Crockfords.

Last but not least, and here’s a shocker: someone tried to murder Cyril “Le Frenchman” Mouly. Yes, I said murder!

Cyril Mouly appeared on the high-stakes poker scene around 2009, but turned out to be an international conman on the run from Interpol, having defrauded businessmen of around €15m in a fake advertising scam.

He also became the subject of a memorable TwoPlusTwo internet meme, after one opening poster attempted to identify the mysterious new arrival at the high stakes tables, with an unintentionally hilarious sketch.

While on trial for fraud this year, a masked assailant attacked him and his driver outside his Paris apartment, killing the driver but missing Mouly.

And on that bombshell, good riddance to this rogues’ gallery, as we look forward, hopefully, to an altogether more wholesome 2015.

Why do idiots insist in making a bad name for a game that is very entertaining and can make some ones life more pleasant, I wish I knew.