Las Vegas is humming with activity right now and all but one of this week’s Big Winners have risen to the top on (or just off) the Strip. Leading the way for non-WSOP bracelet winners is former gamer turned poker pro, Hong Jin-Ho. His nearly $700K score is a testament to the prize pools on offer in Vegas right now. To see which other players have been winning in Sin City, as well as who won Europe’s German Poker Championship, scroll down for CardsChat’s Big Winners of the Week ending Sunday, July 3. 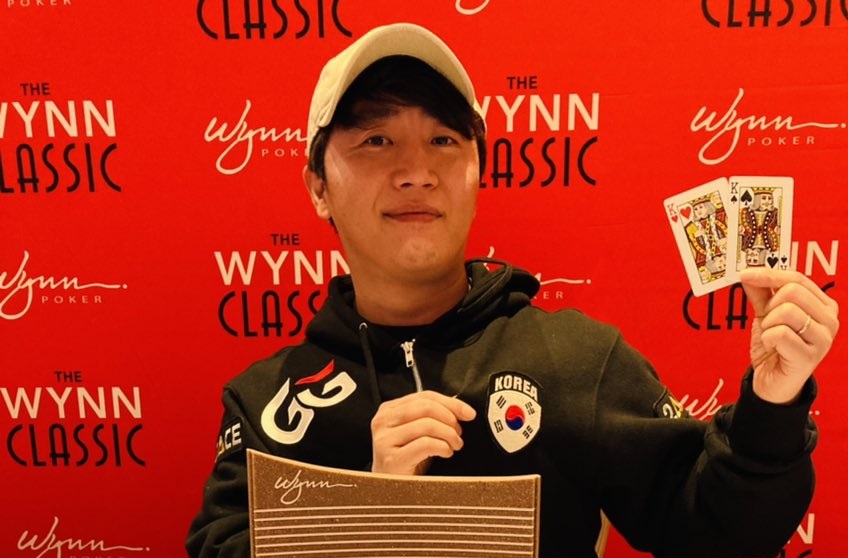 Jin-Ho is making a bid to become the next Bertrand Grospellier of poker with his latest win. The South Korean was, like Grospellier, a StarCraft professional before switching to poker. And, like his counterpart, he’s found success at the felt. Prior to anteing up in the Wynn’s $3,500 event, Jin-Ho had just over $300K in live earnings. After playing his way through 1,427 entrants, he smashed that total, taking his career winning to more than $1 million. 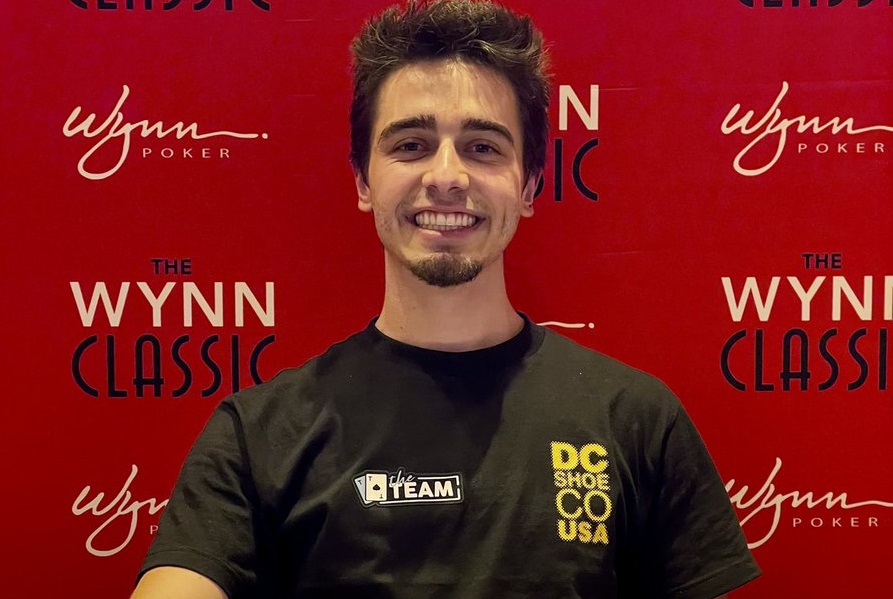 The former number #2 ranked online tournament player in the world, Ketzer, picked up a plethora of bounties on route to winning the Wynn’s latest $5,300 event last Tuesday. When 133 other players had fallen by the wayside, the Team Seletiva member was the only one with his bounty still intact. 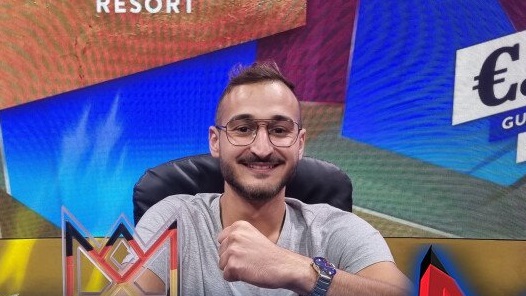 Naim swooped in and took the German Championship title from a field full of Germans at King’s Resort last Monday. Beating a total field of 516 entrants gave Naim his first live title and his first live cash. For a novice in the live tournament arena, winning an €1,100 ($1,150) main event against a host of more experienced players, including Polish pro Maciej Kondraszuk (who finished fourth), is certainly a notable achievement. 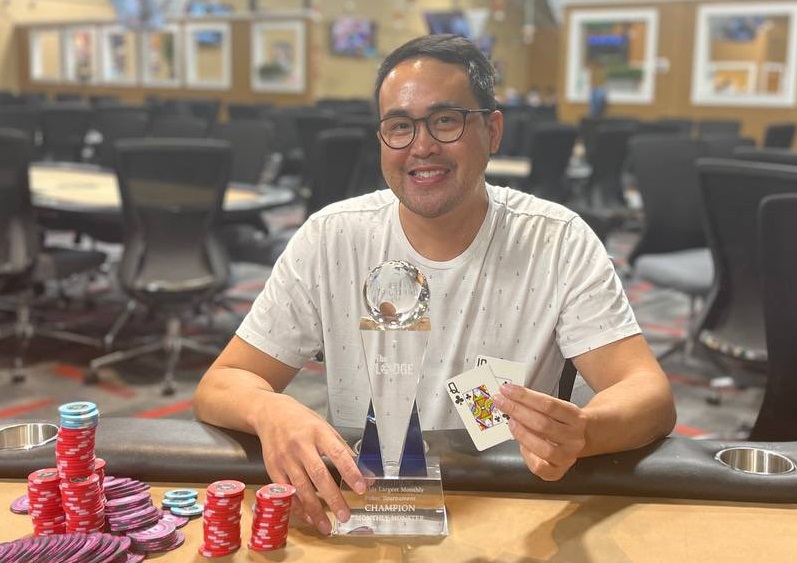 Chan added another five-figure score to his career total last Monday after winning the Lodge Card Club’s monthly $500K guarantee event. Chan, who’s from South Florida, made his first trip to the Lodge to play in the $600 event. By the time he’d played his way through a tough Texan crowd, he was able to cut a heads-up deal and bank the second-biggest win of his career, taking his live earnings above the $400K mark. 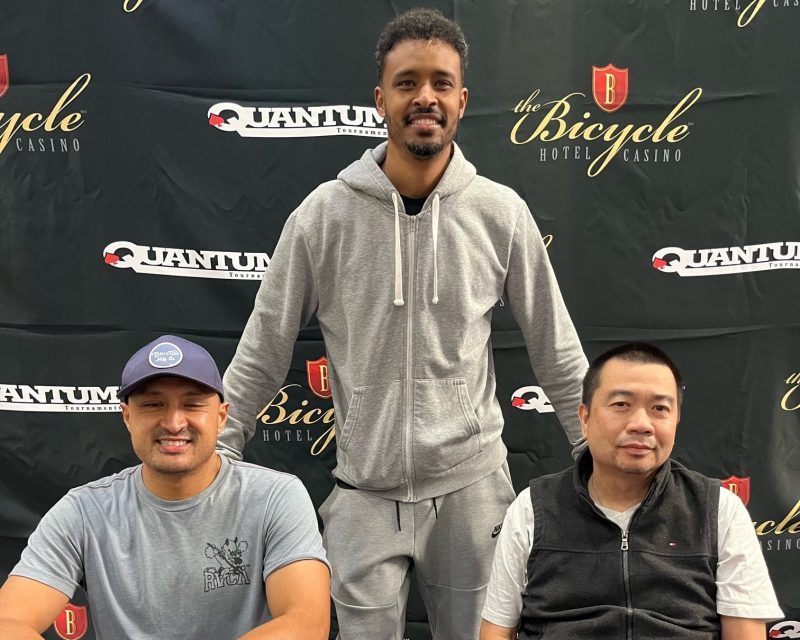 
It’s not often you see what is, essentially, an even three-way chop, but that happened last week at the Bike in Los Angeles when Abate, Nguyen, and  Pilpa agreed to the unique deal. The three players were on break when they discovered they were all within one big blind of each other, so they took a look at the numbers and agreed to the chop. Abate (middle) took home the biggest share at $49,805, while Nguyen (right) was second with $48,910, and Pilpa (left) finished third with $48,760. The tournament attracted 1,468 entrants over the course of multiple Day 1s, and 60 players on Day 2, generating a prize pool of $421,800. The score was the biggest cash of each player’s careers, with Abate more than doubling his total live earnings with this victory. 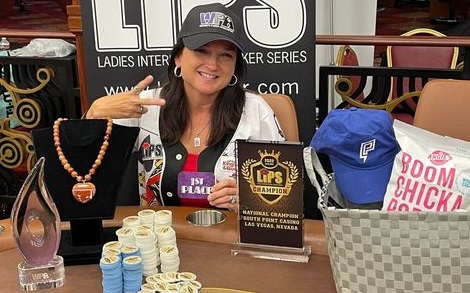 With Ladies International Poker Series events taking place across Las Vegas last week, Read was able to capitalize on the tour’s momentum and pick up a win in the $450 championship. A total of 218 entrants anted up just days after a LIPS event at the MGM Grand (see the big winner below). When the final chips fell and the dust settled, Read added another five-figure score to her career total, taking it over the $250K mark. 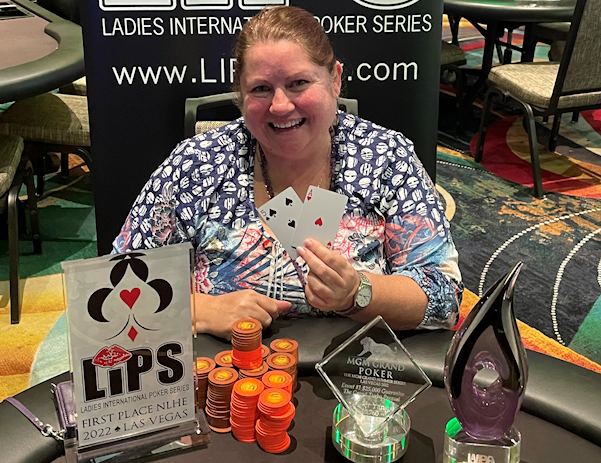 The LIPS tour isn’t just bringing more women from the US into poker, it’s attracting players from around the world. That was evident last Tuesday when Wyvill, who’s from Brisbane, Australia, won the tour’s first event of the week, a $350 buy-in event. Wyvill had just two cashes outside of Australia prior to the event, including a 227th-place finish in a recent $800 WSOP Deep Stack. After beating Tammy Ehrhart, Wyvill secured the second-biggest win of her career, a LIPS trophy, and her first title outside of Oz. 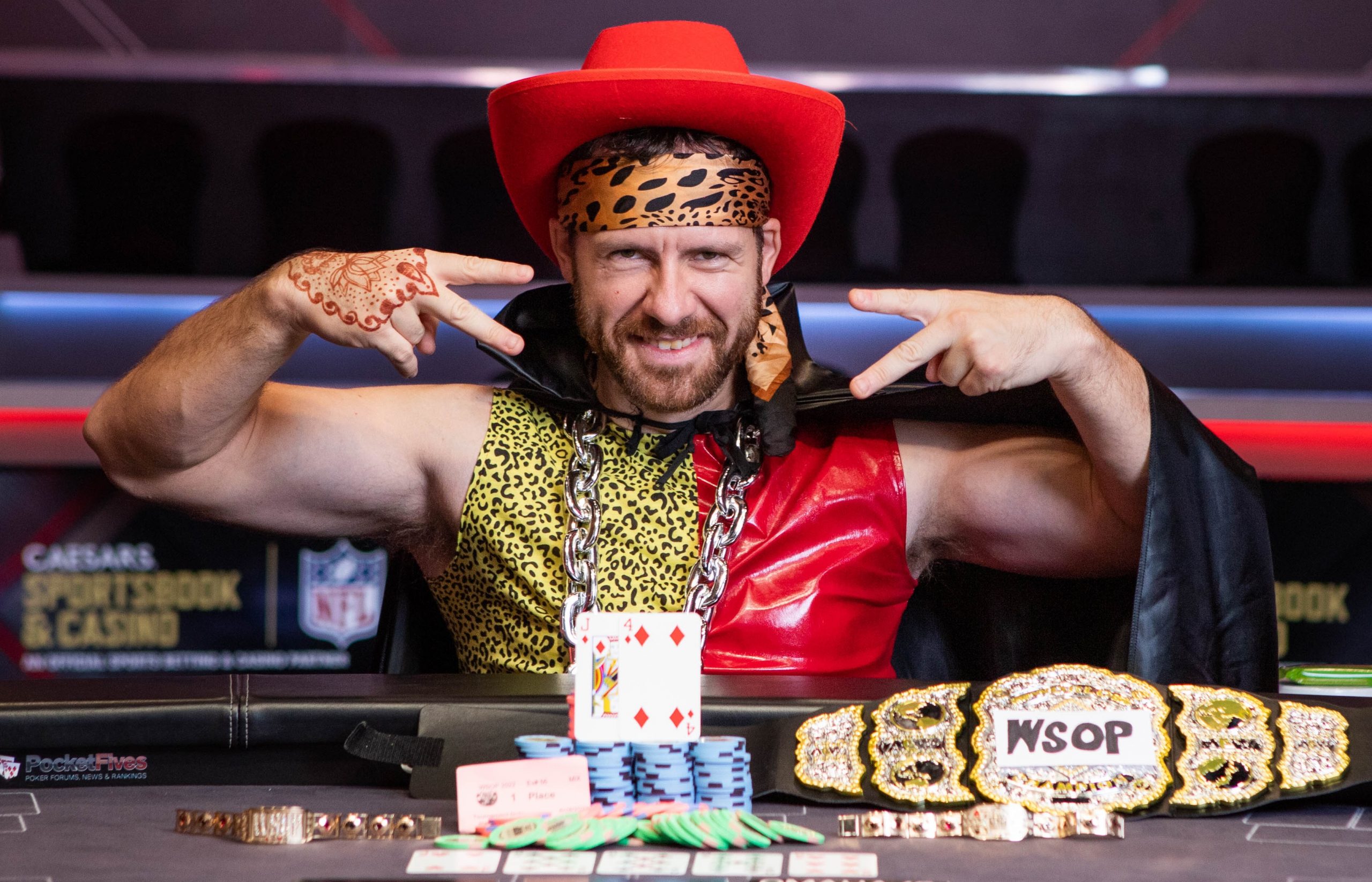 Macho Man Dan went back-to-back in one of the WSOP’s most prestigious events on Thursday. The defending champion lifted the Chip Reese trophy in 2021 while dressed as a character from Street Fighter. This year, his final table outfit was inspired by WWE legend, Macho Man Randy Savage. Cates had to beat a field of 112 entrants to win his second WSOP bracelet. 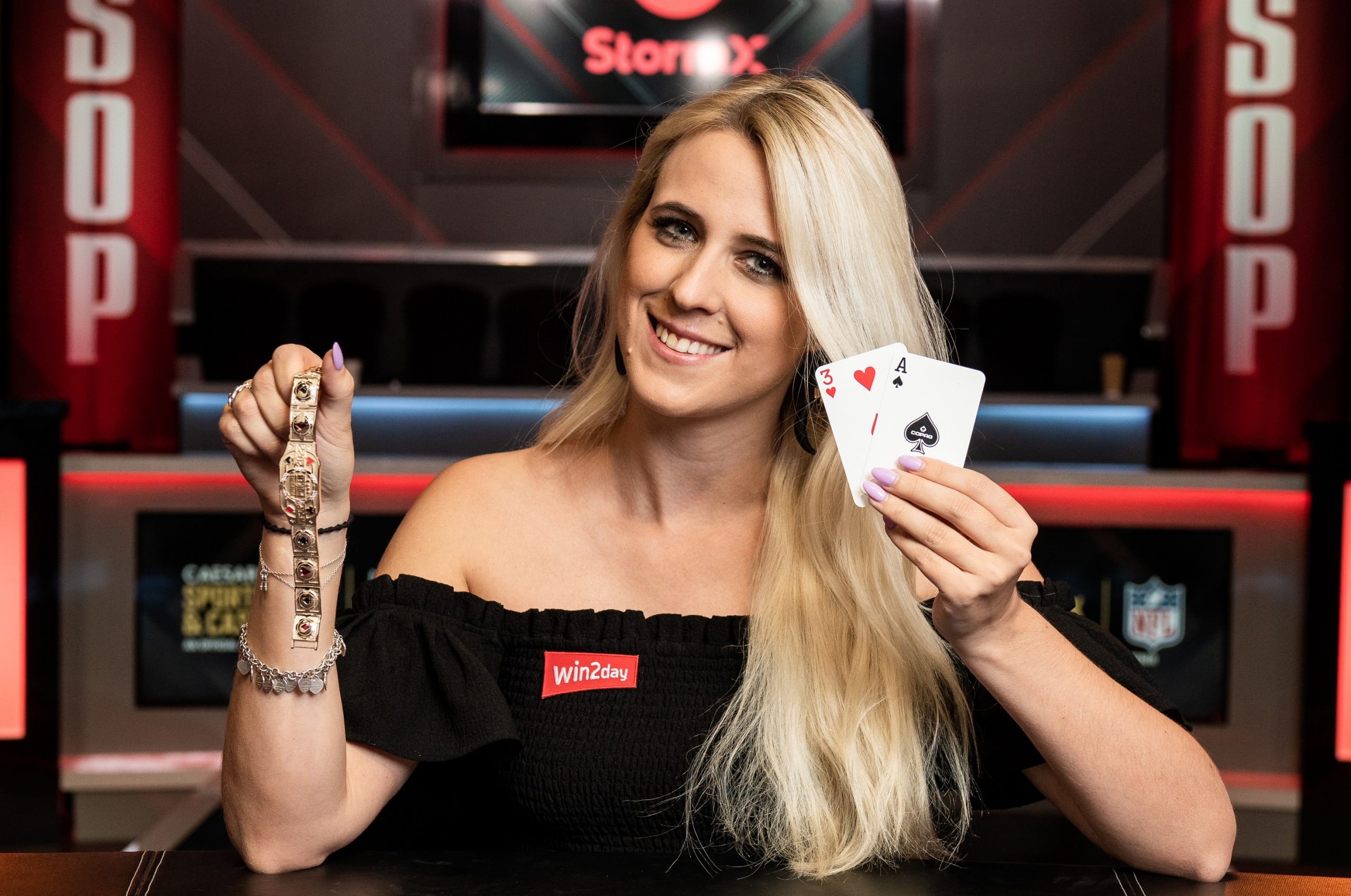 Teusl is having the WSOP of her life. The Austrian pro has cashed four times so far this summer. One of those results was an eighth-place finish in the $1,500 Monster Stack event. The $120,455 prize she won was her biggest to date. That was until she anted up in the $1,000 Ladies Championship. Once she’d made it through a bumper field of 1,074 entrants on Saturday, Teusl was able to bank an even bigger win and, more importantly, her first WSOP bracelet. 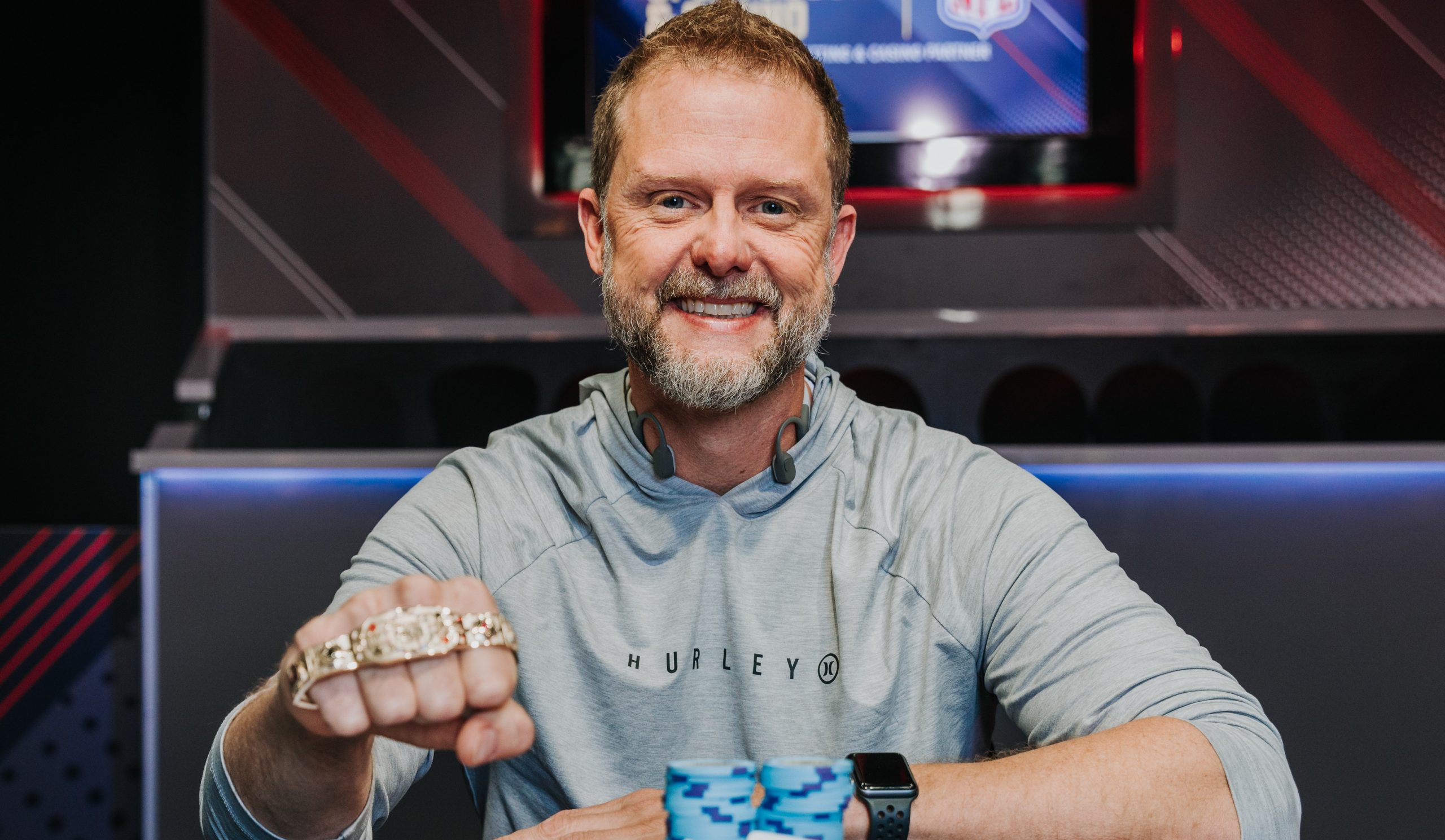 A whopping 3,209 players anted up to salute America’s service men and women last week. The record-breaking $500 WSOP event was set up to raise money for charities, including the United Service Organizations (USO). Todd, who’s been playing poker for 25 years, put the lessons he’d recently purchased to good use as the event drew to a close on Tuesday. Eventually, he got the win and his first bracelet, while military charities in the US picked up $74,809. You can get a feel for the Salute to Warriors WSOP event by checking out this exclusive video.