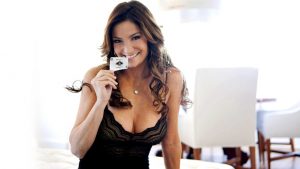 Beth Shak, the former wife of hedge fund manager and fellow poker player Dan Shak, is reportedly offering women a way to find their ideal man at the felt with $1,000-an-hour private lessons.

According to Confidenti@l (yes, that’s really how it’s spelled), an entertainment column on the New York Daily News website, Shak recently launched her own luxury poker set merchandise, as well as a series of private poker lessons that will show women how to win in more ways than one, she claims.

You don’t know who Beth Shak is, you say?

She famously burst onto the poker scene alongside her then-husband Dan in early 2000. Despite having a relatively limited poker skill set, Shak managed to find her way into a number of high-profile tournaments.

Linking up with the likes of Phil Hellmuth and achieving minor celebrity status among TV poker fans, Shak went on to earn more than $480,000 in live tournaments between 2008 and 2013.

Unfortunately, following her divorce from Dan Shak and a barren run of results, the shoe-loving cougar has been confined to the rail in recent years. However, just before the holiday season, she returned with an offer that many aspiring pros will likely refuse.

An Offer You Can’t Refuse?

According to Confidenti@l, Shak is now selling a luxury poker set that contains gold-embossed cards and a hand-crafted box.

What the poker set runs for is unclear, but it certainly sounds like the brainchild of a woman who has her own vanity website and a collection of designer shoes worth, as legend has it anyway, in excess of $1 million.

As appealing as the chip set sounds, it’s the offer of private poker lessons at a staggering grand an hour that’s piqued the interest of the poker community. After news of the offer filtered through the social media airwaves, a number of poker players, including “Lbutch27,” took a shot at the plucky businesswoman.

@Haley_Hintze: “If by interesting you mean mind-numbing, I agree. @bethshak could at least toss in a pair of used Louboutins with the lesson…” read some of the chorus of responses on Twitter.

Although Shak’s poker skills might not be enough to entice the dollars out of aspiring players’ pockets, the promise that attendees will learn how to capture “Mr. Right at the poker table” might just persuade them to ante-up.

Being an entrepreneurial spirit, Beth Shak hasn’t simply focused on her chip set and poker lessons over the last few years. In fact, a quick scan of her website reveals some more of her “inspired brainchildren:

Patented Medical Gown: Looking more like a bathrobe with a hole in it, Shak’s medical gown reportedly has a full patent.

Poker Clothing: Continuing the poker theme, Shak also offers a variety of t-shirts, jackets, and tank tops with poker imagery on them.

Beth’s Bistro: If you feel like a delicious snack, Shak also offers a selection of her favorite recipes, including Mom’s Cheesecake, on her site. We’re not sure that she shows up in a pair of her Jimmy Choos to make it for you, though.

moderatio must be a Joke? never finishes?

I guess there is no moderation at all ?