The New Year brought with it the end of the annual race to become online poker’s biggest cash game winner of 2017. Two players finished with seven-figure profits, with BERRI SWEET ($1,769,395) edging out Timofey “Trueteller” Kuznetsov ($1,454,838) for the honor. 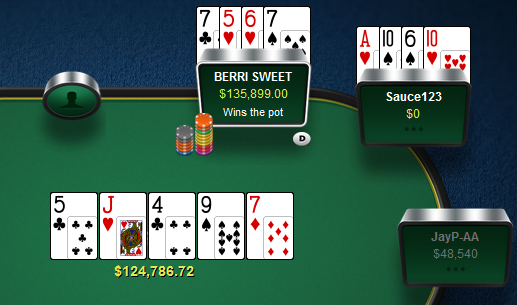 According to HighStakesDB, which tracks the high-stakes cash games on PokerStars, BERRI SWEET, who was November’s biggest online winner, played 55,120 hands spread across 869 sessions in 2017. That averages out to winning $32.10 per hand, whereas Kuznetsov, who played 59,505 hands over 701 sessions, averaged $24.45 per hand.

To put that in perspective, it’s in the ballpark of hourly wages for orthotists and prosthetists ($31.55), court reporters ($24.68), and private detectives and investigators ($23.17).

BERRI SWEET, who began playing pot-limit Omaha on PokerStars on July 7, 2012, has played 176,973 hands on the site with $2,330,314 in winnings. That makes him the 26th biggest online winner as tracked by HighStakesDB.

Neither the 6♣ turn nor 9♣ river on the second helped Blom, and he watched the other half of the pot get pushed to BERRI SWEET, who had made trip sixes.

They enjoy gambling for big money !

First off, congrats to all of the big winners online in 2017. For me, it’s staggering to think that the top player online this year made $1.769M while the second highest netted $1.45M.

Consider this fact though – this is less than half of what the top winner made in 2014 and 2015. Why is that? Is there that much money leaving online sites and going elsewhere? Is it that people are playing more live tournaments within online sites, diverting money away from online cash tables, or are people’s poker budgets shrinking that much that they are playing not as high stakes, and/or playing less?

Also worth noting that only one player recorded a seven figure loss in 2017 – without knowing how many others did that in 2014 and 2015 it’s tough to know how big the poker market was to what it is now, but it’s significant that there were more seven figure winners than losers. Interesting to see Bill Perkins on that list – for a man that lost $500k this past year, you’d never know it listening to him!

Back to Berri…for me, 55k hands isn’t huge. To make essentially $24.45 per hand, not hour, is staggering. Even if they only got 30 hands in an hour, to make $733 / hour is mind blowing. It takes a different kind of courage to play pots worth in excess of $300k I will never fathom. But I’m very curious to know who this guy or girl is, and are they playing MTT or live poker in addition to online.

On a side note, interesting to read about Daniel Negreanu and his loss this year, winning $2.7M in 71 events, but buying in for roughly $2.8M. Shows you that the big stake poker tournaments are here to stay, because for him to play 71 events and win over $2.7M means he played an average buy-in of $40k which a few years ago would be unheard of.

Regardless, interested to see how 2018 goes and who the big winners and losers will be.