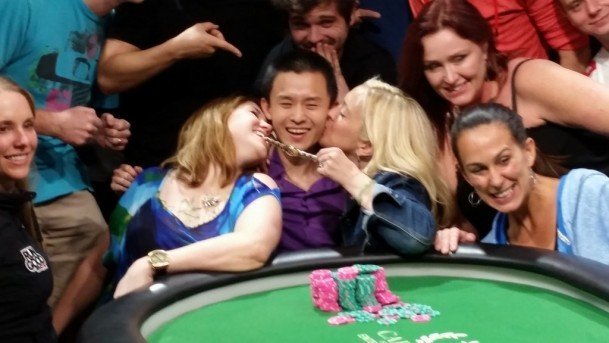 Ben Yu had plenty of support from the rail on his way to winning the $10,000 Limit Hold’em Championship yesterday. (Image: CardsChat)

Ben Yu had a solid WSOP track record before yesterday, but he’s now taken that record to a new level with his first WSOP tournament take down.

The World Series of Poker in fact saw three first-time bracelet winners crowned on Friday, with each of the new champions having to face some major adversity at the final table in order to claim their titles.

Included among that group was Yu, a WSOP veteran who finally scored his first win in his 30th time cashing at the World Series.

Yu took down the $10,000 Limit Hold’em Championship Friday night, scoring a $291,456 prize and his first WSOP gold bracelet. But the win was anything but easy for the American player, who had to battle through a very tough final table to claim his first World Series victory.

Most of the final table action had been dominated by Justin Bonomo, holding the chip lead from the beginning of the day’s play up until the tournament was three-handed. But at that point, Bonomo couldn’t seem to win a hand, and both Yu and Jesse Martin were able to chip up at his expense.

After Bonomo ultimately fell into third place, Martin and Yu were left to battle in heads-up play. In a contest that lasted for over three hours and more than 80 hands, Martin appeared to be dead on more than one occasion, but managed to stay alive and rebuild a workable stack.

Finally, on the final hand of the night, Martin got the remainder of his short stack in on the flop with Q3 against Yu’s AJ on an A-J-T board. Martin needed a king to make a straight, but it never game, allowing Yu to begin his victory celebration.

For Yu, the win wasn’t exactly a vindication of his poker skills, but that didn’t make it any less exciting.

“Oftentimes I think we put too much emphasis on winning,” Yu said after the tournament, pointing out that just making the final table takes plenty of luck and skill. “But it feels so good to win at the same time. There’s nothing like it. There’s nothing as good as winning a tournament: not coming close or not chopping it, but just winning it.”

Yu, who will be part of Team CardsChat in the upcoming Little One for One Drop, was supported by an enthusiastic group of friends on the rail who shared in his obvious excitement following his bracelet win.

“Because I play everything, I have friends from all over,” Yu said. “I really appreciate them all randomly coming out, even though I don’t have a super-closed clique. But they’re all willing to come out here and celebrate with me and sweat me, and I really appreciate that.

“That’s the best part of it: the money is nice and all, but it’s really enjoying celebrating with your friends,” he added.

The $2,500 No Limit Hold’em event seemed like it should have ended early on Friday, as only five players came back to contest the final table action. But Matt O’Donnell and Timur Margolin ultimately battled for an incredible five hours before O’Donnell was able to finally put his opponent away and win his very first WSOP bracelet.

It was a heated battle between two players who desperately wanted the win, and it was ultimately settled on a virtual coin flip, as O’Donnell’s QJ was able to outdraw Margolin’s pocket sixes. O’Donnell took home $551,941 for his hard-earned victory.

“It was definitely a heated atmosphere when we were heads up,” O’Donnell said of the lengthy struggle. “The rail was very aggressive, they were speaking in a foreign language, and we were going back and forth a lot. I was just glad to win.”

The $1,500 Pot Limit Omaha Hi/Lo tournament didn’t see a battle that went quite that long, but it still took Young Ji two hours to overcome Mark Dube in heads-up play and capture his first career World Series victory. Ji earned a prize of $231,102 for overcoming a final table that included luminaries like George Danzer and Connor Drinan.

After the tournament, the 52-year-old from Anchorage, Alaska was elated with his win.

“I’m really happy, too excited,” Ji said. “The way the game was going I had some faith I was going to win. I had a really good, positive feeling that it was coming my way once we got down to heads up.”

Yi now has seven cashes in his WSOP career, and also won a WSOP Circuit ring late in 2014.

The $1,000 Ladies No Limit Hold’em Championship began action on Friday with 795 women in the field, an almost identical number to the 793 who contested this event last year. At the end of the day, Irina Batorevich grabbed the chip lead with 117,400 chips.

Of the 121 players who will return for Day 2, 81 will cash, with $153,876 going to the eventual winner. Notables remaining in the field include Jennifer Shahade, Lisa Hamilton, and Jessica Dawley.

It’s not quite the Main Event, but the $10,000 Pot Limit Omaha Championship still drew quite well, as 387 players turned out for the tournament on Friday. That group was whittled down to 134 by the end of the first day’s play, with George Medrano leading the way heading into Saturday.

Some of the world’s best poker players built big stacks on Day 1 as well. Noah Schwartz, Davidi Kitai, Shaun Deeb, Bryan Kenney, Ben Yu, and JC Tran were all among those to bag six-figure stacks at the end of the night, placing them all within the top 40 of the chip standings.

Jason Les leads a field of 35 players heading into the third day of the $3,000 No Limit Hold’em Six-Handed event. Les has only a narrow lead in a closely packed field, with Stephen Chidwick very close to the lead in fourth place, and players like Rep Porter and Amir Lehavot still with plenty of chips to work with as well.

Only 11 players are left in the $1,500 Dealers Choice tournament, and while Matt Szymaszek has the chip lead, all eyes will be on Robert Mizrachi, who is attempting to win this event for the second consecutive year. This final table is likely to feature plenty of talent, as Christopher Klodnicki and Scott Clements are also among those still in the hunt for the Dealers Choice title.

The Dealers Choice event is likely the only one that will award a bracelet on Saturday, but there will be no shortage of action to keep an eye on with so many different events in play. There are also two new events beginning during the day, both of which should have very distinctive feels to them.

Draft Kings is well-represented as a marketing partner at WSOP 2015. (Image: CardsChat.com)

First, the $1,500 DraftKings 50/50 No Limit Hold’em tournament begins at noon. If you look around the Rio Convention Center, you might just notice one or two advertisements for DraftKings, as the daily fantasy sports site has become a major partner for the WSOP.

This unique tournament will pay out the top 50 percent of the field. But unlike a traditional “double-up” tournament, this one will continue all the way until a winner is determined. Players who make the top half of the event will earn $1,000, while those finishing in the 10th to 25th percentiles will make back all $1,500 of their buy-in. The top ten percent will then be paid using a standard payout structure based on the remaining prize pool.

At 4 pm Pacific Time, the $5,000 Turbo No Limit Hold’em tournament starts. These turbo events have proven popular thus far at the 2015 WSOP, and there’s no reason to think this event will be any different even in the middle of a packed schedule.