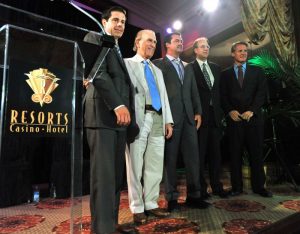 Resorts Casino owner Morris Bailey, second from left, has plenty to smile about as revenues in Atlantic City are up and PokerStars is coming soon to his gambling resort. (Image: pressofatlanticcity.com)

Atlantic City casino operations have experienced a 10.8 percent increase in gaming revenues during the month of September thanks largely due to the Labor Day holiday weekend falling entirely in the month.

The DGE reports that iPoker in September experienced a 10.7 percent falloff from August and a 15 percent decline year-over-year.

Fortunately for poker players in the Garden State, an expected boost will come when PokerStars finally rolls out its network. The Amaya-owned card room dominated the US market prior to April 15, 2011, poker’s Black Friday, and continues to control the industry worldwide.

Internet poker currently sits in the gutter, but plenty of enthusiasm remains thanks to the DGE finally granting its approval of PokerStars’ license and its return to the United States.

Though New Jersey is an isolated iGambling environment that doesn’t share liquidity, that could change in the future.

Lesniak co-authored the state’s online gambling legislation and would likely be more receptive to interstate compacts than Christie.

Following the thorough DGE investigation into PokerStars and subsequent approval, Amaya is also going to likely apply for additional licenses in states with legalized iGambling.

Four casinos currently sit unoccupied along the Atlantic City Boardwalk, none more prevalent than the Revel.

The $2.4 billion resort, opened in 2012 and closed in 2014, has had little to celebrate since breaking ground. That won’t change anytime soon.

This week it was revealed the Bank of New York Mellon has begun foreclosure proceedings against ACR Energy Partners, the sole utility supplier to the mammoth structure.

ACR has been in a legal dispute with Revel’s new owner Glenn Straub since he acquired the property for $82 million in April.

As Revel spiraled into bankruptcy, payments to ACR went unfulfilled. Straub argues he isn’t on the hook for those delinquencies, and after the two sides failed to agree on new terms, the energy supplier cut off service.

ACR was ordered by New Jersey officials to power fire safety systems, but Straub has failed to pay for those incurred costs. Now $800,000 behind on payments, BNY Mellon has no choice but to foreclose on the company.

With growing competition in neighboring states and cities, land-based gambling destinations now accessible in Baltimore, Philadelphia, Connecticut and soon Massachusetts, less competition on the Boardwalk is welcomed by the remaining casinos.