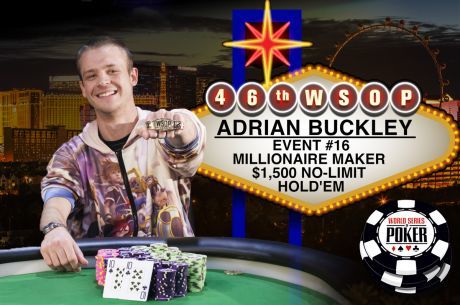 Adrian Buckley took down the WSOP 2015 Millionaire Maker event in his first-ever cash at the World Series. (Image: WSOP.com)

Adrian Buckley wanted to be a millionaire, and now he is one, thanks to this year’s Millionaire Maker at the World Series of Poker.

The WSOP had yet to award a $1 million prize this year, but that barrier was finally broken by the most appropriate tournament on the schedule, the aforementioned Millionaire Maker.

Adrian Buckley had never before won a WSOP bracelet. In fact, the electrical engineer had never before cashed in a WSOP event or on the WSOP Circuit. But he has broken through in a big way, winning his first bracelet and $1,277,193 by taking down the 2015 Millionaire Maker.

The Millionaire Maker is one of the events at the WSOP that’s designed to give recreational players a shot at winning life-changing money as part of a massive field. But that almost didn’t happen this year, as three notable pros made it all the way to the final table in their bid for a bracelet.

Mike Sexton, who these days is best-known for his work with the World Poker Tour, made it into ninth place before being eliminated. Erick Lindgren fared even better, as the two-time bracelet winner made it into seventh before getting knocked out.

Buckley defeated Javier Zarco in heads up play, but it’s hard to imagine that Zarco feels very disappointed. This score marked just his second career WSOP cash, and was worth $791,690, a prize that is still larger than any awarded in any other tournament at this year’s WSOP.

For Buckley, the win means he can expand his WSOP dreams.

“I came here and planned to play ten events, never dreaming that I’d win this one,” Buckley told WSOP.com. “Now, I will definitely play the Main Event. But after this, it’s back to work for me.”

Poker pro Matt Elsby outlasted a field of 319 players and survived eight hours of play at the final table to win the $3,000 Six-Handed Limit Hold’em tournament. The win earned Elsby his first WSOP bracelet, and was also worth $230,799, by far his largest WSOP cash.

Surprisingly, the final table of seven had only one bracelet winner in Brian Hastings, who finished in seventh place. But there was one other big name for Elsby to deal with, one who made it all the way to heads up play, in Gabriel Nassif.

Despite the fact that Nassif is well-known for his tournament success, he was still looking for his first WSOP bracelet. Unfortunately for him, Elsby both played well and ran well in the late stages to clinch the title.

Something you might not expect to read in a serious report about the WSOP in 2015 is that a player known only as “Prince of Docness” is currently leading the $10,000 Omaha Hi/Lo Championship event heading into the third day of play.

A little research reveals that this player might also occasionally go by the name Doc Kegal, but as far as the WSOP and most of the poker world is concerned, you’ll only see him listed by his “royal” title.

With 18 players remaining in the tournament, there are more than a few notables fighting for this prestigious bracelet. Daniel Alaei, Scott Clements, Anthony Zinno, Joe Cassidy, and Erik Seidel are all in the top 10 in chips moving towards the final table today, while Bart Hanson, Jeremy Ausmus and Eli Elezra are among those on shorter stacks.

In the $1,500 No Limit Hold’em tournament that began on Monday, Garrett Beckman currently holds the lead with 35 players remaining, and is one of only two players over the one million chip mark. A few names to watch in the field include Andy Frankenberger, Kevin MacPhee, and Natasha Barbour, with the latter still having a chance to become the year’s first female bracelet winner. 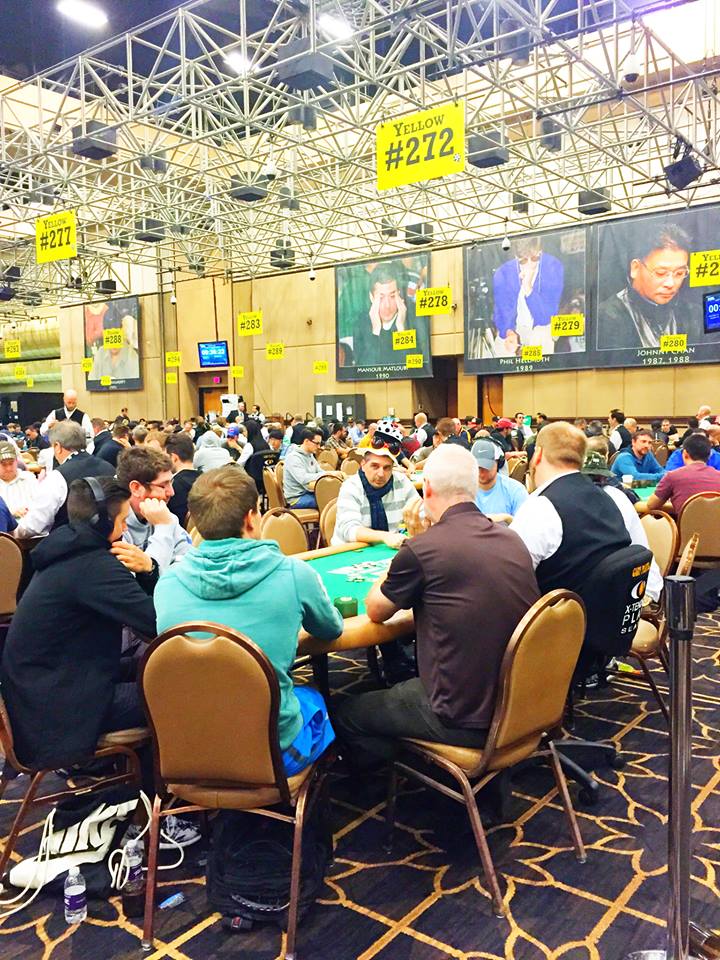 Plenty of action continues today at the Rio, with many events kicking off or wrapping up. (Image: CardsChat.com exclusive)

Matt Stout and Jason Wheeler are both close behind and looking for the first bracelets of their WSOP careers, while Antonio Esfandiari and David Baker (“ODB”) have also gotten off to strong starts.

Yesterday also saw the start of the $1,500 No Limit Deuce-to-Seven Lowball tournament, which drew 219 players. Christian Pham leads the last 40 players after a great Day 1 saw him bag 145,175 chips, more than 55,000 ahead of his nearest competitor, Nicholas Verkaik.

This tournament has one of the lowest prize pools of the series, with the winner taking him just $81,314.

However, it does award a bracelet like any other tournament at the WSOP, which explains the very strong field: Eric Wasserson, Dan Smith, Robert Mizrachi, and Huck Seed are among those with very healthy stacks heading into Day 2.

Both the $10,000 Omaha Hi/Lo Championship and the $1,500 No Limit Hold’em tournaments were scheduled to play down to a winner on Wednesday. However, both of those look questionable: while neither tournament looks certain to drag into Thursday, it could happen if either event proceeds a bit more leisurely than expected today.

Two more tournaments will be joining the action today as well. At noon, we have a treat for fans of mixed games, as the $1,500 HORSE tournament will begin (that’s Hold’em, Omaha, Razz, Seven Card Stud, and Stud Hi/Lo).

Then, at 4 pm Pacific Time, the $5,000 No Limit Hold’em Eight-Handed event will begin. While that might seem like a minor deviation from the standard nine-handed format, many players will tell you that removing just one player helps push the action at a Hold’em table significantly, so this event might draw a lot of players who find themselves a little bored in full ring games.