In 1991, the World Series of Poker awarded its first $1 million payout to Brad Daugherty for winning the Main Event. It wasn’t until 2001 that second place also paid seven figures. As poker boomed, such life-changing prize money became more common. By 2019, 10 tournaments were paying 21 people a million-dollars-plus. 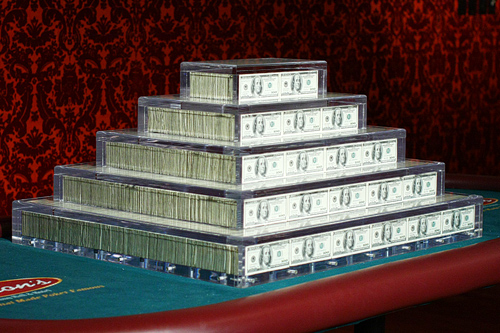 A million dollars, seen here at Binion’s, home of the WSOP until 2005. (Image: Caesars)

Then 2020 happened, and the WSOP moved all-online. By most measures, it was a success — a decent facsimile under tough conditions.

WSOP Executive Director Ty Stewart couldn’t be reached for comment, but he previously told the Las Vegas Review-Journal the 2020 online series would be “the esports version of the WSOP, and it’s going to be huge.”

With a million dollars serving as a benchmark for the biggest and most important tournaments for the past decade-and-a-half, the CardsChat data team examined the history of seven-figure prizes at the WSOP to see how this year stacked up. In total, three events awarded eight players $1 million or more — harkening back to an era that was post-UIGEA, pre-Black Friday. 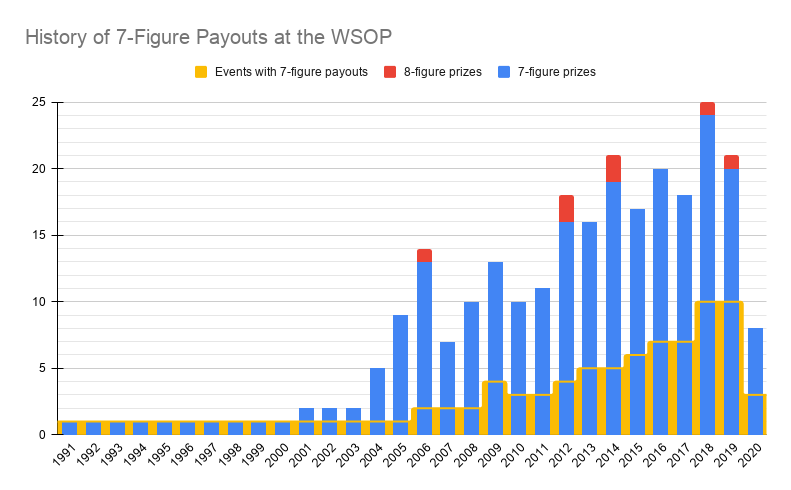 Although the online WSOP made fewer millionaires this year than was planned for pre-COVID, the $5,000 Main Event on GGPoker created a $27.6 million prize pool, the largest for an online tournament in history. It paid out four seven-figure prizes.

Stoyan Madanzhiev of Bulgaria took down the Main Event on GG Poker, outlasting 5,801 others to claim a record online prize of $3.9 million. He cracked the pocket aces of China’s Wenling Goa (who took home $2.7 million) by flopping a straight. Two Americans finished third and fourth – Tyler Rueger ($1.9 million) and Thomas Ward ($1.35 million).

Only two other events awarded prize payouts of more than $1 million. These included the $25K NLH tournament, won by German Christian Rudolph for $1.8 million, and the $1K WSOP Super Millions, won by Canadian Connor Drinan for $1.4 million. These results were similar to what was seen at the live festivals in 2007 and 2010.. 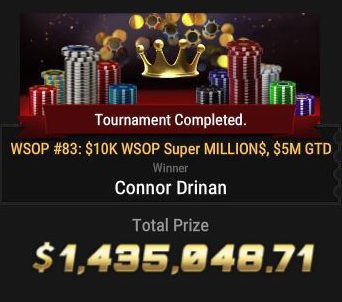 The traditional winner’s shot looked different this year. Where are the people surrounded by chips, posing with a bracelet and their winning hand? (Image: GGPoker)

After Daugherty pocketed $1 million in 1991, exactly one player earned a seven-figure payday during the WSOP each year through 2000: just the Main Event winner. The top two finishers in the Main Event each pocketed at least $1 million over the next three years, including in 2003 when Chris Moneymaker earned $2.5 million by beating Sam Farha ($1.3 million) heads-up for the bracelet.

ESPN’s coverage of the Tennessee accountant’s victory, along with the emerging popularity of hole-card cameras and the expansion of online poker, helped usher in the great growth of the game and bigger prize pools at the WSOP. By 2005, all final-table participants in the Main Event became pre-tax millionaires. In 2006, the year Jamie Gold won $12 million as the Main Event champion (the peak prize for the tournament and the first eight-figure score for the series), a second event finally offered a seven-figure prize — $50,000 HORSE, won by Chip Reese for $1,716,000.

Andy Bloch, who finished runner-up to Reese in 2006 (for $1,029,600), told CardsChat that he participated in the WSOP more actively in 2020 due to the convenience of logging in from home, but it paled in comparison to the standard live spectacle.

“Selfishly, I liked being able to play more events,” Bloch said, “but it didn’t feel like a World Series.”

As the father of two daughters, ages 6 and 3, Bloch says he rarely leaves Las Vegas to play poker tournaments, so he didn’t travel to Mexico to play in the GGPoker portion of the WSOP Online Series. But he did note that online play proved easier for him as a work-from-home dad.

“I liked the fact that I could log in a few minutes before the re-entry period ended and still put my kids to bed,” he said.

Bloch believes Caesars, which has been operating with a dramatically reduced workforce in the pandemic, could do more to hype the online series. He says simple marketing enticements, such as free room service at casino-hotels for players participating in high-roller events, would go a long way toward building larger prize pools.

“If they do more to promote it, they could have more people,” he said.