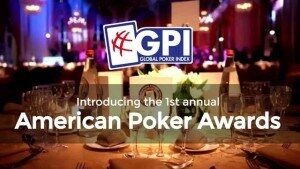 The 1st Annual GPI American Poker Awards will occur in February and 35 players were recently nominated for a variety of awards. (Image: YouTube.com)

The Global Poker Index (GPI) has announced the nominees for their first-ever GPI American Poker Awards.

A nomination panel of approximately 60 poker industry insiders were tasked with submitting two selections in each of the nine categories.

Four finalists were then tabulated from the voting results with a jury panel deciding the winners.

The GPI American Poker Awards are sponsored by PokerStars and take place on Friday, February 27 at the SLS Hotel in Beverly Hills, California.

GPI Executive Comments on the Panel and Awards Gala

GPI Chief Executive Officer and American Awards President Alexandre Dreyfus stated in a press release, “I wish to thank each and every member of the Nomination Panel for taking part in the selection process for this very first edition of the GPI American Poker Awards.”

He went on to state, “We noticed some very interesting trends and I do believe that their selections reflect perfectly with what happened in the North American poker landscape in 2014.”

Dreyfus concluded his statement by reiterating that his event is already endorsed by the global poker community, specifically by players around the world.

He also said that support from PokerStars builds on that equity and helps the organization promote poker on a larger scale.

Next on the docket was the “Breakout Player of the Year” award. Nominees included Daniel Colman, Mukul Pahuja, Jake Schindler, and Brandon Shack-Harris.

It should be noted that Colman is the only player to receive two nominations based on on-the-felt accomplishments in 2014.

The “Event of the Year (Over $2,000)” category recognizes events that made headlines, offered players an amazing experience, and brought the goods when it came to poker drama.

Those nominated include the Seminole Hard Rock Poker Open, the WPT Montreal, the WPT World Championship, and the World Series of Poker Main Event.

The “Event of the Year (Up To $2,000)” category recognizes some of the smaller venues and tournaments that occurred. Those nominated include the HPT Cal State Poker Championship (at Commerce Casino), WPT500 at Aria (Las Vegas), WSOP Millionaire Maker (Rio, Las Vegas), and the WSOP Monster Stack (Rio, Las Vegas).

Notable events that received votes but were not finalists include the WPT DeepStacks in both San Diego and Calgary, plus the WSOP Seniors’ event.

The poker “Industry Person of the Year” award is sure to be a hotly contested and coveted award during the ceremony. Nominated individuals are some of the biggest movers and shakers in the industry.

Those in the media were also recognized in the “Poker Media Content of the Year” which included ALL IN Magazine’s Mark Newhouse, Brad Willis for the WSOP PokerStars Blog, Live Reporting by Pokernews, and Jason Somerville for Run it Up.

The “Charitable Initiative of the Year” recognized the best events that saw the poker industry give back to those in need. The “All In for Kids” Poker Tournament for CHOP and the WPT Foundation was a finalist for the award, as was the Charity Series of Poker. The other two finalists were REG (Raising for Effective Giving), and the WSOP One Drop event.

A unique category is the “Poker Innovation or Initiative of the Year” which has four well-deserving nominees. Included are Poker Night in America, Twitch.tv for allowing online poker streaming, the WPT’s successful partnership with Deepstacks and other groups, and the WSOP Monster Stack event.

Finally, the last category is for the “Media Person of the Year” with a few recognizable names. The first finalist is a well-known media icon and noted author, Nolan Dalla. Other nominees include Chris Grove, Kevin Mathers, and Rich Ryan.

Fans Can Get Involved

There is technically a tenth category, that for Poker’s Best Ambassador.

Voting is wide open right now, so fans are encouraged to visit the GPI site, as the People’s Choice will be honored during the American Poker Awards in February.