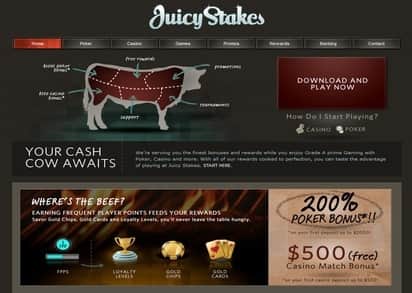 Make your first deposit and Juicy Stakes Poker will match it 100% up to $1000. Sign up using CardsChat.com exclusive bonus code CHAT1000, it's that easy! ? Please read the terms and conditions of the bonus carefully.

Juicy States Poker was founded in 2009 as a member of the Juicy Stakes Poker Network. While it was initially a minor player on that network, it gained a reputation as a trustworthy and dependable site, as well as one with very soft games (a trait that had been true about the Juicy Stakes Network since it had begun operation). The colorful and cartoonish layout of their website appealed mainly to casual players, though with strong promotions and a good player base, players of all types were able to find things to like about the site.

More recently, the Juicy Stakes Network was purchased by Lock Poker. The two entities were then merged to form the Revolution Gaming Network, a new player in the online poker industry. This change helped boost the player pool available for those playing poker through Juicy Stakes, improving game selection and making it easier to find games even during off-peak hours. Today as we review Juicy Stakes Poker - now part of the Revolution Network - it offers one of the ten biggest poker rooms or networks in the industry, and is part of the largest online poker network available to players in the United States.

Juicy Stakes Poker uses the same highly customizable software you'll find throughout the old Cake Poker Network sites, though in contrast to Cake Poker, our reviewers found that Juicy Stakes defaults to a lighter, breezier look and feel. The software client has plenty of tabs, lobbies and menus for easy navigation, allowing you to find exactly what you're looking for without wading through games you're not interested in.

Speaking of games, Juicy Stakes offers two different brands of poker: Texas Hold'em and Omaha (including Omaha Hi/Lo). While this is a smaller selection than many of their competitors, these two games are by far the most popular poker variants played today, so this should be enough to satisfy most players. These games are available in a number of different formats and a wide variety of stakes, with both tournament and cash game play available at al hours. No limit games up to the $5/$10 level run frequently, with heads-up games as high as $500/$1,000 sometimes being seen. Pot-limit Omaha games offer similar stakes, though the $200/$400 tables are usually the highest that you'll see active.

While the level of play in these games has improved somewhat since Juicy Stakes has moved to the Revolution Network, much of the player base is the same as it was back in the Cake Network days, meaning there are plenty of fish in the sea. Still, you'll want to be careful at higher limits, where plenty of strong players from Lock Poker have joined those that were already at Juicy Stakes Poker to make these games as tough as you'd expect.

When it comes to promotions, our Juicy Stakes Poker review team found the same great system that has always been in place on all Cake Poker skins. You'll earn frequent player points as you play, which will in turn allow you to earn gold chips that can be redeemed for tournament entries. In addition, players get extra bonuses in the form of gold cards (which can be redeemed for cash or exclusive tournament entries), while the Loyalty Level program allows players to earn rewards even faster.

In conclusion, our Cardschat.com review of Juicy Stakes Poker is pretty positive. The switch to the Revolution Gaming Network has improved what was already a strong poker site by taking the great games and promotional offers and adding a large player base to the mix. If you're looking for a poker site that's fun to play on even when you're playing some serious poker, give Juicy Stakes Poker a look.