How much would you bet? 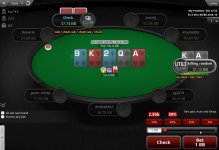 And why that much?

I would check it and take what's in the middle unless he has Jack Ten. At least I won't lose any more! Still have a good stack either way!

perrywh said:
At least I won't lose any more!
Click to expand...

I thought we are winning here...
F

There is 75% pot left, so for me I am jamming here. I dont like to bet something like 50% pot and then leave him a small amount of chips left, so that I am getting 8:1, if he check-jam on me. The only other possible size for me would be a very small one, and with top two we are not going for thin value, so I dont like to pick a very small size.

Sure we could be beat by a straight or a set, that slowplayed the turn, but I think, its way more likely, we have the best hand, and I also think, enough worse hands can call a jam. He can have a worse two pair, and if he was chasing a flush or straight and ended up with top pair instead, a lot of people wont be able to fold. Some might even get sticky and call down with KJ or KT, because they simply dont believe you. And whenever we have a nutted hand, we want to at least give people a chance to make that big failed hero call.

Its also still fairly early in a 45-man SnG, so there is no particular ICM pressure on either player yet. These are not expensive tournaments, and they run all the time, so for most people, if they bust here, they just play another one. This is not a spot, where we expect to see people making tons of nitty folds, but of course that will also depend on the player type.
3

I understand a jam here if you made one since if you were going to bluff a missed diamond draw you would be putting it in here. Ranging the villain who looks like they called our open, check called flop and check called turn then I am thinking they are on a missed draw themselves (dont know the sizings of those bets) or they are Kx heavy. Of course they could have some hands that beat us but I think a set raises the turn and I think J10 raises the turn as well unless maybe it is specifically J10 diamonds. Given that I believe the largest chunk of their range is Kx which will mostly fold now to the river Ace I would be betting pretty small here (12-15 BBs) trying to get a crying call. If they were to check jam here I would have to tank for a while but probably would lean towards making them show me the J10 because again I dont think a set check calls twice on flop and turn.

Pretty stupid for an A.G.I.

Without necessarily disagreeing with previous posts, I'd probably bet 1/2 pot...

I feel it's good value for our hand and gets called more often by hands we're beating than the jam.

I highly doubt J10 check/calls the turn so am fairly happy calling it off if they shove over the top.

I would check ,because what make I when Irise and the other goes all in

If the opponent has a KQ type hand, then they are hating that ace on the river.

I think I would value bet about 1/4 pot and then be prepared to call a check raise.

I would bet everything, I always go there. I have an aggressive game that's why I'm always risky
V

You need to make a small raise to test your opponent's hand.

The question is, what worse hand would call or better hand fold?
I don't see any... maybe K9 or KQ depending on how the hand developed.... but I would check...
V