Attempts to get out of the micro limits

What actions do you take to get out of the micro limits?
Last edited by a moderator: Jun 1, 2019

In addition to continuous learning at microlimits, you need iron patience. To reduce variance due to the number of participants, you need to additionally play another discipline.

I play poker freerolls as much as possible
J

If you can't beat the micro you can't beat higher tables. Play ABC poker first then move up as your bank roll increases. If you got money then by all means jump up. But realize their predictors. Try and have fun

Either wait until your bankroll and skill allows or deposit enough to start above micros.

Patience is the key. If you don't have the means to deposit enough then you will just have to grind your way up.

Just remember just because your bankroll is ready doesn't mean you are ready. You could have binked a good score early on by simple luck. I would play a while at a certain level and assure yourself you are good enough before you move up.

I take actions to go beyond micro-limits only when I raise a good bankroll in a cash game or when I win a bankroll in tournaments, but the most important thing is that you have a good experience in the game and that you can be good at playing micro-limits so that You could go to higher stakes! 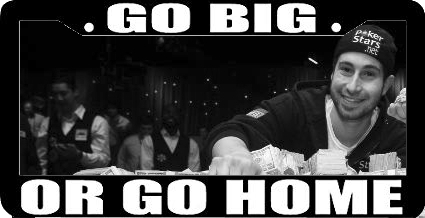 in order to get out of the microlimit you need to improve your game! it's the most important! Add to this a competent bankroll management and you will succeed! besides all this - a good option is satellites!
N

To move up you first need to consistently be winning at micro stakes. When this is achieved and you have big enough bankroll you can move to the next level. Micro is the best place to learn the basics and test your knowledge. You better make beginner's mistakes at micro stakes instead on higher levels.

Im also trying to get out of the micros.

I think the way to go is STUDY STUDY STUDY!
Watch some free content or even better; buy some from a training site.

Also think its important to learn some hand reading
B

try poker fighter App, it's kind of specifically for micro players to improve all their fundamentals and easily move up from the micros (as long as you take it seriously)

just write down poker fighter in the app/play store

You have to fight harder for the money at higher limits, it means more time, more hands, much more often to fold, and have VPiP under 10%.

While at micro limits... it's normal occasion when someone goes all-in with overcards like AK when you flopped a set of deuces.

Lets say you have a small boat, and a fishing rod, a net and a harpoon. You can catch a lot of small fish with a net, or search for a big tuna using expensive bait and fishing rod or another choice is to fight sharks and whales with a harpoon. Can your boat and fishing road handle a big strong tuna? Can it handle a big shark or tribe of whales? What if you'll be biting dust each day instead of eating tuna or shark meat? Isn't it better to catch a 1000kg of different small fish instead of catching one single 1000kg shark? It's the same 1000kg of fish meat, but you spend less resources to get it. Jumping from 1K to 5K at NL10-20 tables and jumping from 1K to 5K at NL100-200 tables are two different stories, sometimes you do that at high limits only because of the rakeback.


If your question was about how to win big, then the best option to win big is to play big guaranteed tournaments and start with satellites. Win Sunday Storm ticket using 5 coins... win 2.2 ticket to the bounty at 20cent satellite. Win Sunday Million ticket starting with sub-satellite.

Some maths for example:
It might take months or a year or even more to get to the final table in daily $2.2 or 3.3 bounty starting from satellite. But at the end it will be a pure profit, since you've spent 50cents per day on qualifiers, and total per year was $180 for 365x2 = 730 attempts. If you will not win the 1st or second place once in 730 attempts starting from cheapest qualifer with no rebuys, then you'd better quit playing poker or take a break and read all possible articles about it.

Good points here for micros players like me.
D

Just keep growing the bankroll and moving up accordingly. I started with $25 in freerolls and .50's and once I had enough I moved up to 1.10 buy-ins. Just maintain at least 1:50 to 1:100 BRM and as long as you're getting enough ROI you'll move up naturally.
M

When in Micros I triple up I leave the table and move to another. Not risking 3 buy ins on getting called by a gutterball and hitting. Seems like a bad move in theory but allows me to bank 2 buy ins in the wild west poker tables.
M

You need patience. Low buy in mtts the fields are at least 2000+ players in the field.
Getting deep often depends on flip situations unfortunately. Once your Under 25 bbs
and playing a big pot, your hand has to hold up or your crippled. I have had sets on
the flop not hold up and it's over me. Don't know how much better I can get my chips in and lose key flip.
But that's the variance we all live with.
R

Ventoman777 said:
What actions do you take to get out of the micro limits?
Click to expand...

Study the game , the only solution , if you have already tried to build a bankroll and level up stakes unsuccessfully , then study of the game , improving your strategy and shove-fold decisions is a must
M

I bought into a hot $109 the other night on pokerstars had a 40 something field finished in 8th for $259. That was taking a shot. But what I found was I took the game alot more seriously and used all the content I had studied to win when I was playing up from my usual buy in. It keeps you on edge and your nerves are alert in this format. I think you play better when you have more invested. When you play micros your more likely to punt off every once in a while if you make it deep. And it takes alot longer to make it deep in micros because the fields are so big and the more people you have to go through the more hands you have to play and the more hands you have to play the more likely you are to run into a cooler. I have a good grasp of the game and GTO and push shove charts and have studied alot and watch alot of streamers play.I have also gone over the cardschat course and subscribe to learnpropoker by Ryan Laplante. I have been playing recreationaly for 6 years with the want to go pro and played alot when I was a kid which is were I learnt the game. I think if you want to go pro you have to spend the money and start at medium to high stakes to succeed. You have smaller fields bigger pay days. The competition is tougher but there is only so much math that is possible with a 52 card deck there is only so much game theory possible. Granted every outcome is different and every person you play on any given day is different, but there is only so much that can change. The more you play the more comfortable you get at the mid stakes. Nothing wrong with sharpening your teeth on micros but to make a consistent living and eventually a comfortable living is to hard and time consuming at micro levels. You dont see any of these streamers who make a living playing poker grinding it out at micros for us to watch. They are all playing mid to high stakes.

finaltable1 said:
what for?
75% of fish plays micro limits
24% of fish plays medium limits
1% of fish plays on top
.....
If you will not win the 1st or second place once in 730 attempts starting from cheapest qualifier with no rebuys, then you'd better quit playing poker or take a break and read all possible articles about it.
Click to expand...

I don't disagree with the point you are making about taking money fromthe fish at the lower levels, but you are assuming that the financial results are the only reason to determine your limits. Could it be that there is an element of "improvement" that can come with moving up in limits?

I suspect that a $.05/$.10 player will get destroyed in the Main Event, while a player who has more knowledge and experience with different player types has a better chance.