How to Deal With Bad Poker Beats

Judging by the forum threads on CardsChat.com, lots of players have a hard time handling a bad beat. At any given time, there are two or three threads asking for advice on how to avoid going on tilt after a perceived "bad beat". But first of all, what does a bad beat mean?

What Is a Bad Beat?

A bad beat in poker is when a player with strong hands loses to a player with weaker hands by hitting a lucky card. This unexpected win is called a bad beat.

If you are going to lose control every time someone hits a two-outer on the river to win a hand, you are not going to have a fun - or profitable - poker career. Learning to control your emotions is a key to your ultimate success (or failure) as a poker player, for either cash game players or tournament specialists.

There is nothing worse than investing several hours in a tournament, getting close to the final table and losing 70-80% of your stack to some idiot who risked his entire tournament life by chasing a flush or a straight. The same can be said for cash players who've been at a table for hours, building a huge stack of chips and then losing to a donk who called your turn shove with a gut shot and hits. 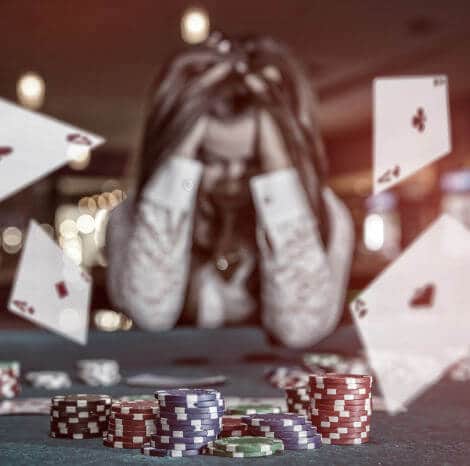 Yes, the player may have made a statistically bad play, but that's just part of poker. You have to learn to deal with the bad times as well as the good. It's hard to remember when it happens, but you want players at your table who are willing to risk a lot of chips chasing a gut shot.

Learning to handle your emotions is key. When you play a hand perfectly and your opponent hits a two-outer on the river, you've just got to put it behind you. If you let one bad beat affect your next hand or series of hands, you have compounded your losses.

The first part of dealing with bad beats is to realize it works both ways. Keep track of how many times you hit a card on the turn or the river to win a hand. Knowing that you have done this to others will help you understand the cards are not against you. It's just poker.

Another step to take if you are upset about a losing hand is to get up from the computer and take a self-induced break. Get a drink from the refrigerator, take out the trash, brush your teeth - some quick little chore to get your mind off the knucklehead who just called an all-in after the turn with pocket 4s and hit a set on the river to beat your top two pair.

This is where your time bank comes in handy. Don't click the sit out button, just let your time bank expire. If you are deep in the tourney, you may have as much as 90 seconds or two minutes of saved up, which means you can take a 3-4 minute break and probably miss no more than two hands. When you feel settled again, sit back down and resume playing.

If you're playing live, leave the table, go to the bathroom and splash cold water on your face. Text a buddy about the idiot next to you, and then return to the table ready to make amends.

Many players force themselves to tighten up for a few hands and only play monsters, like AA/KK/QQ or AK/AQ, until the urge to shove all their chips into the table passes. This is not a bad strategy, but if you are not in the right frame of mind, regardless of what your cards are, your odds of making a bad decision are still higher.

Another tip is to focus more on the process than the results. For instance, let's say you got it all-in pre-flop with QQ against a player with QJ suited. You are more than an 80 percent favorite to win the hand. But this means the other player will win about once every five or six hands. In other words, it's going to happen more than you think, and it's going to happen to you sooner or later.

This is what the pros call variance. At moments like these, you have to ask yourself, “Did I make the right play?” Getting it all-in when you are an 80 percent favorite is never a bad play, regardless of the results. Don't let variance undermine your confidence, and don't let it send you on a downward spiral, either.

The pros at the World Series of Poker almost never show emotion - one way or the other. They will take a bad beat or rake in a big pile of chips with basically the same expression. They know that losing control generally precedes losing all your chips.

Luck runs both ways. It is not skill when you hit a two-outer on the river. And it's not luck when your opponent does the same. It is just poker. The quicker you learn to handle your emotions after a bad beat, the more quickly you will become a profitable player. 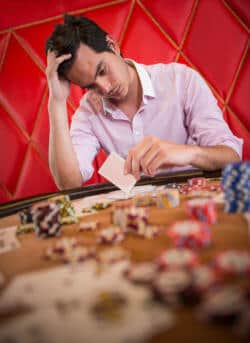 Swiss psychiatrist Elisabeth Kübler-Ross first identified the Five Stages of Grief - anger, denial, bargaining, depression and acceptance -- in 1969 (coincidentally, the same year as what is now known as the World Series of Poker begun). Kübler-Ross came up with her five stages of grief after studying how people reacted to the loss of a loved one.

A similar concept can be applied to the poker phenomenon of tilting. Let's call it the Five Stages of Tilt.

It starts with a bad beat or two

Going on tilt is usually preceded by a trigger event. For the Five Stages of Tilt, the trigger event is usually a bad beat. Most players can handle a bad beat or two. You can't expect your hand to hold up every time. If you feel yourself starting to lose it, it's probably time to get up from the table and take a self-induced break.

Put a muzzle on it

The first sure sign you are going on tilt is when you feel the need to berate the player who just sucked out on you. If you feel this urge coming on, put a muzzle on yourself. Sure, you might feel temporarily better by calling your opponent a freaking moron or a donk, but it'll only make you look worse than you already feel. Type out what you want to say in the chat box, but delete it. Then, just type in 'Nice hand.' Taking the high road will make you feel better about yourself and help the good vibes return even quicker.

Paranoia will destroy you

After you have successfully complete the second stage, the Tilt Express has officially left the station - and there is no turning back. The next stop is Paranoia.

"The cards are against me." "I can't catch a flop." "Every time I get AA, everybody else folds!" Raise your hand if you've thought this before. Of course, this isn't true. The universe hasn't singled you out for a lifetime of gloom and despair. There is no mystical force that ensures your opponents will constantly hit runner-runner flush to knock out your flopped set. It just happens. The more you play poker, the more it's going to happen.

Houston, we have a problem

After a series of bad beats, missed flops and monster hands that only win small spots, the inevitable meltdown ensues. The Tilt Express is on autopilot by this point. Signs of this stage include playing bad hands in early position, C-betting every flop, and shoving the river with nothing more than a King high. Of course, the strategy ultimately fails, and the meltdown ensues.

The final stage is acceptance. This occurs after you have lost all your chips. You must convince yourself that you played well and that the other players were just luckier than you. This stage is crucial. If you can't get to this stage, you will find yourself trapped in a never-ending cycle of bad beats and blow-ups.

Recognizing the Five Stages of Tilt early is key, because once that train leaves the station, it doesn't come back until it reaches its destination, a little place known as "Losertown."

Improve your game by checking out even more poker strategies and guides or bring it back to basics with the poker rules for other poker variants.

visit the strategy section for more articles like this!