When faced with a raise during the pre-flop betting round in poker, each player has three options:

match the bet put into the pot

bet more than the player who raised

Players normally fold or raise when faced with a pre-flop bet - but below we'll run you through instances when calling is the right decision. This article is not about limping (calling the Big Blind when there have been no pre-flop raises). It's about how you should react to a pre-flop raise.

On this page, you will find:

The strategies in this article are based on a nine-player game. Early position is considered Under the Gun (player to the left of the big blind) and UTG+1. UTG+2, UTG+3 and Hijack are considered middle position, and Cutoff, Dealer (button), Small Blind and Big Blind are considered late position.

There are many factors that come into play when deciding to call a pre-flop raise. The first thing to note is the position of the raiser. If the player is from one of the two early positions, it should be an indication he has a really strong hand - a monster pocket pair (AA, KK, QQ and maybe even JJ) or a suited Broadway (A-K, A-Q, A-J and possibly K-Q or K-J).

If you're going to call, you need a pocket that plays well against this type of hand. Aces with medium or low kickers are not advisable, because you are likely going up against an ace with a much better kicker or a high pocket pair. Let's say you have A-8 off. Against this pocket, A-K suited is a 73:22 favorite to win, and pocket jacks are 72:28. In other words, you are dominated by any hand that should be in his pre-flop raising range. 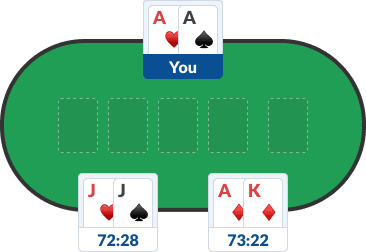 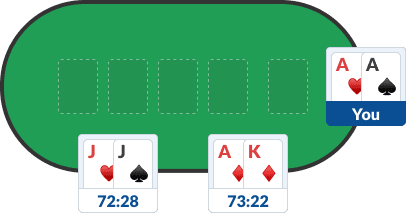 Suited aces don't fare much better. Pocket jacks are 68:32 against A-8 suited, and A-K suited is 69-27 against the same pocket. Slightly better, but still dominated. 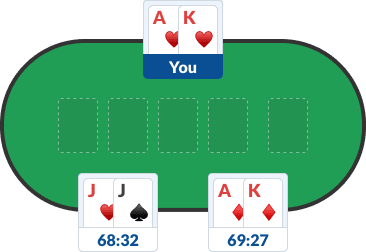 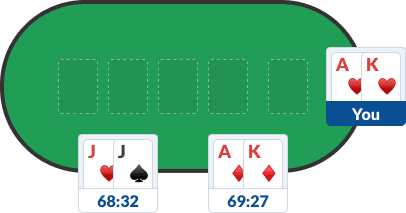 However, the odds shift significantly for suited connectors. Let's say you have 10-9 suited. AK suited is still favored, but the odds drop to about 61:38. AK off is even lower at 59:41. The odds are similar all the way down to 5-4 suited. 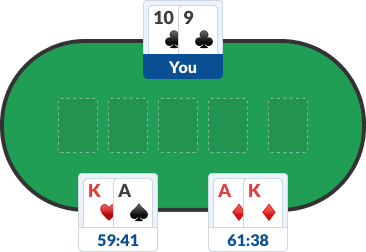 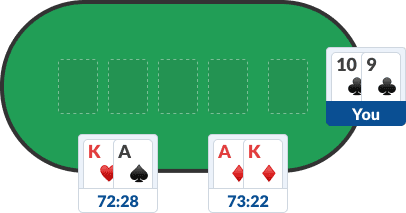 A pocket pair dominates suited connectors, so you have to be careful playing this kind of hand. But if you think your opponent is playing a monster ace, then it might be worth making the call.

Unless you are calling from one of the blinds, you will have the advantage of position on subsequent streets. If the early raiser comes out firing after the flop and you whiffed, it's an easy decision to fold. If he checks the flop and you whiffed but maybe have a backdoor straight or flush draw, you can decide to take a free card to see if that improves your hand.

If you're deep stacked and confident in your ability to play with position, suited connectors can pay off against monster pockets.

You think your opponent is playing a monster ace:

Firing after the flop

Take a free card and then analize your hands. Do you have chances for

Raises in Middle and Late Positions

If the pre-flop raise comes from a middle position, then it is reasonable to expect this player's opening range has expanded slightly compared to the early position raises. In middle position, players will open with medium pocket pairs, suited aces, even hands like J-10 suited. As a result, the kinds of poker hands you should call with also expand. Aces with weak kickers are back in play as are medium pocket pairs.

If the pre-flop raise comes from late position (cutoff or button), the player may be attempting to steal the blinds. Calling with second tier hands (like K-8 suited, medium pocket pairs and any ace) is reasonable here.

Player may attempt to steal the blind. Possible hands:

This is when intelligence on your opponents is vital. Keep an eye on how many times the players to your right raise from either the button or cutoff, especially if it has folded to them. If they are a serial blind stealer, then calling to see a flop could pay off, as they may be opening with less than optimal hands.

You also want to watch how many times they make a continuation bet (C-bet) after the flop. Players who try to steal lots of pots are prone to making lots of C-bets. One pattern to watch for is a pre-flop raise, C-betting the flop and then checking the turn.

A final note about position is to remember if you call from the big blind (or the small blind and the big blinds folds), you will be playing out of position on subsequent streets. If you are not confident in your ability to play out of position, then folding might be your best move.

The size of the bet needed to call should be another major consideration. Calling is most likely an acknowledgement you are behind in the hand. Therefore, don't risk a significant amount of chips entering hands in which you suspect you trail.

In a multi-table tournament, the standard pre-flop raise is somewhere between two and three blinds (early in a tournament, when blinds are low, raises can be in the 5-6 BB range or even higher). Late in a tournament, effective stack sizes are smaller and every chip is precious.

If your stack size is less than 30 BBs, calling pre-flop should almost be eliminated from your repertoire. You don't want to risk 10 percent - or more - of your stack playing a hand where you need to hit the flop to have a reasonable chance of winning. You need to be protecting your chips and should focus on playing premium hands and taking advantage of position.

If your stack size is more than 30 BBs, you've got enough flexibility left to take a chance on a hand every once in a while, but you don't want to be loose with your chips. Pick your spots judiciously in these instances. You need to have a reasonable expectation that the post-flop action will be down to two players. You want to avoid finding yourself in multi-way pots with draw-heavy hands.

If you have one of the larger stacks at the table, then you can loosen up and take more chances.

Protect your chips and focus on playing premium hands.

You can take a few more chances but don't be too loose.

Do you have a large stack?

You can loosen up and take more chances

A final consideration when deciding to make a pre-flop call is the stack sizes of the opponents who have yet to act. Be wary of the short-stacked (10 BBs or less in tournaments or about 25 percent of the minimum buy-in for cash games) players. They are apt to go all-in at any moment. There is nothing worse than putting chips into a pot and not seeing the flop.

Range is hugely important in poker. If you understand range, you may be able to predict what hand your opponent has. This will greatly benefit you when it comes to deciding whether to fold, call, or raise before the flop.

We recommended you use the standard poker hands odds chart below to familiarise yourself with hands that have the best chance of winning. This will help give you a better idea your opponent's range based on how they act before the flop.

What does pre-flop mean in poker?

In Texas Hold’em poker, pre-flop is the round in which players get their hole cards. They then decide their next move based on the cards they are dealt and check, fold or raise.

Can you go all in before the flop?

In no limit poker, you can go all in before the flop whenever you want. This mostly happens when players strongly believe they have the best hands, or when they are the short stack in the game and are trying to double up.

When should you call in poker?

For beginners and casual players, it's best to fold all low-value cards that can't be used to make a straight e.g. 2-7 or a face card with a low kicker e.g. J-3. If you are dealt a hand like A-K or K-K, it's sometimes worth calling the big blind to get a look at the flop. Be advised, it's easier to get away with this when playing with friends or at beginner tables where there are no sharks.

Should you always raise pre-flop?

In short, no. You should raise pre-flop when you are confident you are the favourite in the hand. This will help build the pot up and give you a better chance of winning the blinds before you see the flop.

What is range in poker?

Range is the potential combination of hands a player might have at any time in a poker game. Being a better judge of range helps you understand what hand your opponent has and can help give you a major edge over them.