Poker Starting Hands Percentage & How to Play Your Position

A common question amongst beginning poker players is, "How tight or how loose should I play?" More specifically they ask,"What percentage of hands should I play before the flop?" These are good questions. However, the answers to them are rather complex. Why? Because poker is a constantly changing game and your decisions should be adjusted according to your opponents' actions and tendencies. 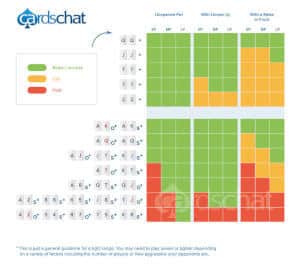 It's also worth noting that a simple answer to how many starting hands you should play just doesn't exist. Experienced players will be better at playing post-flop, and therefore will be able to play a wider range of hands successfully. However, we recommend that beginning poker players play a tighter style. The reason? Beginning poker players will have less post-flop experience, which may lead them to make costly mistakes that experienced players would avoid. New to poker? Check out the basics about poker hands and ranks here.

There are, however, a few general guidelines you may want to follow when you are starting out. Below we outline the most important of these:

When to Call and When to Raise 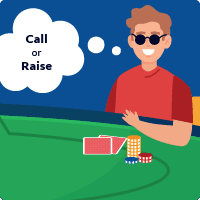 If the action is folded to you and you have a hand you want to play, you should generally come out raising. If you don't think your hand is good enough to raise with, then just fold. This prevents your opponents from being able to put you on a weak hand (which you would signal by limping) and also forces the other players to put more money into the pot pre-flop when you are holding a good hand. 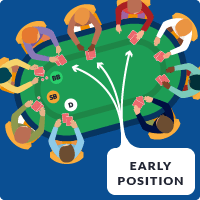 Early Position (EP) is usually considered to be held by the first three players to act at a 9-handed table. I these positions you hav at least 6 players still to act and thus you will need a strong hand to play. Normally, solid players will raise three times the big blind with something like 66+/AQ+ (which is only 6.5% of hands).

This may seem tight, but remember you are risking three big blinds to win only 1.5 big blinds if your six opponents all fold. On top of that you may also have to play out of position post-flop if you are called. Because of all these disadvantages, it is generally best to have a strong hand before the flop. 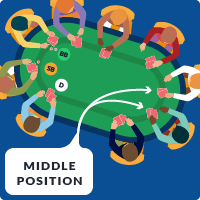 Middle position is considered to be the second and third positions that are to the right of the button. Here we have fewer people remaining to act, so if we do get called, we get to play in position more often. This means that we can start to loosen up a little bit. The most important players to consider are those between us and the button, because these are the players we will have to play out of position against after the flop (should they call).

However, the tighter they are playing, the more hands we can play. But if we are playing against very loose players on our left, we still should play somewhat tight. This may seem like a disadvantage, but we will make up for not playing as many hands by making more money with the hands that we do play. As a baseline we'd recommend raising three times the big blind with hand like like 22+/AT+/KJ+/89s-JQs/A2s-A5s. This is 15.5% of hands. If we have tight players on our left we can start to raise with hands like 56s-78s and QJ/A9s/K9s/KTs/QTs/J9s.

As you become more confident in your post-flop play, you can also start to add hands in the second category into your regular raising range. Just keep in mind that, when you have very loose players on your left, you are going to have to tighten up a little bit. If you have someone with position on you that is not folding very often, the last thing you want to do is put money into the pot with 65s, as you are not going to be a winner at showdown very often.

Starting Hands to Play on the Cutoff & Button 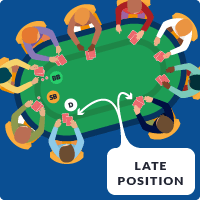 Cutoff (when you are one position before the button) play is going to depend heavily on what the button is doing. If the button is very tight, you can treat the cutoff position as another button. If the button is playing 70% of hands, then you will have to tighten up a bit. As a default I'd probably be raising around 25% of hands on the cutoff, which comes out to pretty much any pair, any suited ace, A9o+, any broadway (face cards), any suited connectors, as well as K8s+, Q8s+, J8s+, T8s+.

On the button, or on the cutoff with a tight button, you can start to really open up a lot, normally raising 50% (or more) of your hands. You are guaranteed to be in position if you get called, and only have two players to get through anyway. If one, or both, are very 3-bet happy, and you don't feel comfortable playing weaker hands against 3-bets, then you can tighten up a bit. However, even if they are loose and calling a lot pre-flop, you should normally be able to play well enough in position after the flop to still be able to profit from the hand. Essentially, any hand that is not two bad offsuit cards are fair game for raising.

Whether you are an experienced poker player, or just getting to know the game, you might find the Starting Hands Chart below helpful to improve your game. You may use the button on top to toggle between suited and unsuited hands.

Starting Hands from the Small Blind 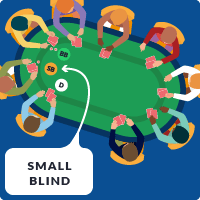 If it is folded to you in the small blind, then you should be looking to see how tight the big blind is. If they are very tight, then you can get away with stealing a lot. But, given that the only player left to act gets decent pot odds to call and will be in position against us post-flop, we generally need to be much tighter here than we would from the button. The small blind raising range should be similar to cutoff range, assuming that the big blind is not very tight. If the big blind is folding 62.5% or more, then we can raise any two cards and still show a profit. Most people will be below this however, and in that case we need to be a bit more selective and be folding the majority of our hands.

Playing Any Position with a Raise in Front 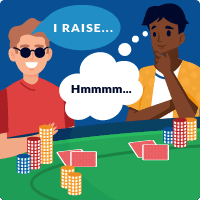 Generally if there is a raise in front of you, then you are going to need a hand better than theirs to continue, or else you should be holding a hand that has good implied odds. For example, if someone raises in early position and we think they're playing similar to the strategy described here, then the raiser should be holding something like 66+/AQ+. We're not going to make money by calling with hands like AJ or KQ against these hands, and thus we should just be folding. If we have a hand like 55 however, we might consider a call because if we hit a set we are likely to find our opponent holding an over pair and thus we can make some money from them.

When we are 3-betting (re-raising a pre-flop raise), we should always know why we are 3-betting. When first starting out it is fine to 3-bet when you think you have the best hand and will get called by worse. Once you get comfortable also consider adding in hands that would normally be a fold, so that your 3-bet actually gets your opponent to fold. Either way, you should always know why you are 3-betting. Never 3-bet just to define your range, or to see where you're at, or for any of those kinds of reasons. Only 3-bet if you think you will get called by a range worse than yours, or if we will get hands better than yours to fold.

Below you will find all hands you may be dealt in poker, together with their corresponding odds of winning. 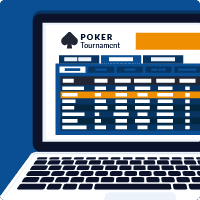 Early in the game, when stacks are deep, you can play tournaments extremely similar to cash games. As antes kick in, and as stacks get shallower, you will have to make a few minor adjustments. First of all, when antes start affecting play there is more of a benefit to winning the pot, so you can raise a wider range of your hands pre-flop.

When stacks are shallow there is also more benefit to making top pair or overpairs, compared to hitting sets and making flushes. Therefore, you should be more inclined to play high-card value hands, rather than pairs and weak suited connectors. Also, as you start to get 10 or fewer big blinds in your stack, you generally want to be playing an all-in or fold strategy. Antes normally mean that there are already 2.5 big blinds in the pot, so you get a very good price on your steal, increasing your stack by 25% or more without contest when everyone folds, as well as giving you a chance to more than double up if you get called.

We have a number of great strategy articles available here at CardsChat.com. Our Texas Hold'em Starting Hands guide is a great follow up to this article and has more specific information on which hands to play. It also has charts that you can use when learning to play tight, solid poker.

How many different starting hands are there in poker?

There are 1,326 possible combinations of cards from a standard deck but there are only 169 non-equivalent starting hands in poker. This number is made up of 13 pocket pairs, 78 suited hands and 78 unsuited hands.

Pre-flop refers to the phase before the flop (the dealing of the first three face-up cards to the board). The pre-flop is after blinds have been posted and players have been dealt their pocket hands. First bets are played during this phase, which is also called the pre-flop betting round.

How do you play pre-flop?

There are three concepts that guide pre-flop play: Equity, implied odds and position. Equity can be seen as how much of the pot your hand is worth (i.e. the better your hand, the bigger your equity). Implied odds are the theoretical odds you have of winning as the game progresses, due to your opponents' missteps or more (i.e. the potential winnings for that hand versus the amount you need to make the next call). Weighing these two up against each other is key in playing the pre-flop phase. More information on pre-flop terms can be found on our pre-flop concepts page here.

Once you have looked at equity and implied odds, the most important factor to consider is your position. Broken into early, middle and late, your position refers to when you are able to place your bets. The later your position, the more information you have about your opponents' hands, and the more aggressive you can be in your pre-flop play.

What hands should I play in poker pre-flop?

The best hands to play in poker pre-flop will always be your big pocket pairs (such as Ace-Ace, King-King and Queen-Queen), followed by big-suited connectors (such as suited Ace-King), and, finally, your big connectors who do not share a suit.

Which is the best hand in poker?

The best hand in poker is the royal flush. This hand consists of the Ace, King, Queen, Jack and 10 of the same suit.

What are the odds of getting a royal flush in poker?

Learn about odds and outs in this great article.

Learn to build a 'roll and move up in stakes!