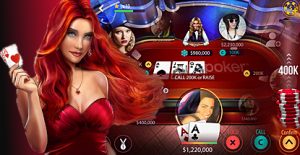 Zynga Poker is one of several games now on hold. (Image: Zynga)

Financial figures from Zynga revealed weak results for the second quarter of 2014. The final numbers prompted the social gaming company to cut full-year forecasts and put the release of several games on hold indefinitely.

Zynga Poker is one of the most popular games from the company, along with others like Words with Friends. They rely heavily on the Facebook platform for connections to users, though, and analysts predict that the firm may need to rethink its long-term strategy in order to move forward and return to its expected growth.

Second quarter revenue came in at $153.2 million, down from $230.7 million year-on-year and short of the $157.1 average of estimates provided by a group of analysts. The significant $62.5 million loss on the year caught many stock watchers by surprise.

Forecasted deferred revenue had been set at $770 million to $810 million, but it has now been reduced to $695 million to $725 million. The highest project came in April for $810 million.

The stock price according to Nasdaq immediately sunk nine percent in after-hours trading on August 7, and it reached a low point of $2.70 on August 8. There has been some rise since that time, but the stock seems to have evened out around the $2.80 to $2.85 range after having been well over $3.00 per share for most of the last three months. Its high point for the year came in March when the price skyrocketed to more than $5.50.

Don Mattrick, the company’s chief executive officer, told Reuters that Zynga “decided that the best choice for the medium and the long term was to move that revenue effectively from 2014 to 2015,” referring to the projections. He admitted, “Moving revenue on one hand is clearly discouraging… but we are being consistent against our lens of medium-to-long-term choices for the benefit of customers and shareholders.”

He remains confident that the benefits will be clear and substantial in 2015. “I feel like we’re making progress,” he said.

The Bloomberg View analysis of the latest results from Zynga offers the opinion that the company must move away from its reliance on Facebook as a platform for its games. The company has seen a spike in the number of mobile users, and it needs to veer more strongly in that direction going forward.

Games like Zynga Poker are still available to customers, but upgrades and new developments are on hold for the near future.

However, the company has moved ahead with big licensing deals with the National Football League in America and Tiger Woods for a new mobile golf game. The NFL game was released on schedule, and the Woods product will be ready for a 2015 launch. Another deal with Warner Bros. for a Looney Tunes game is also continuing on schedule.

As for Zynga Poker, players can expect news about the game as the year progresses. The marketing team is looking to restructure it, though no details have yet been released. Users of Words with Friends, Kim Kardashian: Hollywood, and Candy Crush can expect changes as well.

bad ssl client authentication certificate does not allow me to access Zynga Poker. How do I resolve this problem?

bad ssl client authentication certificate does not allow me to access Zynga Poker. How do I resolve this problem?