Yahoo US Online Poker Shut Down One Month Into Launch 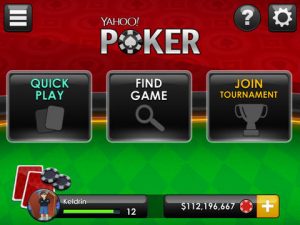 Yahoo dumps its poker platform after just a month, dashing hopes, at least for the immediate future, that it would offer real-money play when the regulatory landscape became favorable. (Image: Yahoo.com)

Yahoo US online poker has shut down its play-money Texas Hold’em portal just a month after its launch, citing “changes in supporting technologies” and a new product streamlining initiative.

The move came as a surprise to many observers, who had speculated that the Internet giant was preparing to monetize its platform once the regulatory landscape in the US became more favorable.

The company has already successfully gone real money with its fantasy football and fantasy basketball offerings, so real-money online poker seemed to be the next natural step.

However, talk of a new Yahoo-powered online poker boom has been somewhat premature. Yahoo recently closed its entire Classic Yahoo Parlor games because, it said, it could no longer host them, due to technological changes.

“In January 2014, changes in supporting technologies and increased security requirements for our Yahoo web pages made it impossible to keep the games running,” explained a company statement. “Following these technological advancements, the old parlor games were incompatible, insecure, and no longer functioning correctly.”

Yahoo plans to now gradually develop new versions of the most popular games, as part of a long-term project, perhaps leaving the door open to a return to online poker in the future. PR Marketing Manager Sean Hamel told Forbes this week that the Texas Hold’em portal is being shut down not for security reasons, but as part of an effort “to streamline our product offerings and focus our energy and resources on developing for Yahoo’s core experiences.”

It could be that Yahoo is shifting its focus to the lucrative world of social gaming. While the popularity of Yahoo Chess, for example, has always been huge, the growth of the far more monetizable social gaming industry over the last few years has been hard to ignore.

The company recently announced that its new platform, the Yahoo Games Network, will allow third-party social games developers to access its giant distribution network, which is estimated to reach some 800 million potential gamers.

Yahoo has made numerous social gaming acquisitions since Marissa Mayer joined as CEO in 2012, such as Loki Games and Cloud Party, as well as cross-platform gaming infrastructure provider Playerscale. The creation of the Yahoo Games Network is clearly indicative of the company’s new focus, as it enviously eyes the social gaming revenue of Facebook. Facebook recently reported that over 100 games developers generated over US$1 million for themselves in just one quarter of 2013, while users were plowing more than US$1.5 billion into social games alone

Yahoo has also unveiled the Yahoo Classic Games Network, which allows users to play touch-screen friendly games across multiple platforms, many of which will be eventually powered by the Yahoo Games Network.