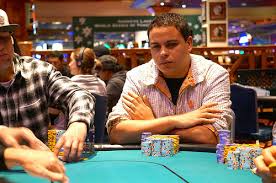 Jesse Wilke took down the WSOPC Lake Tahoe event and $125,401 for first.(Image: WSOP.com)

Jesse Wilke of Seattle, Washington won his first World Series of Poker Circuit (WSOPC) event in Lake Tahoe, at the same time as the WSOP Main Event final table drama was playing out earlier this week. Wilke played in the event held at Harveys Lake Tahoe and was able to best 380 other players and took home a $125,401 check for his efforts. In addition, he’s also won a seat at the National Championship.

As are many in the poker community, Wilke is a 32-year-old former online poker pro that has been forced to turn to live events and smaller circuit tournaments to make a living. Being pushed into this new career lifestyle by the events of Black Friday, Wilke had been searching for his first Circuit event win.

He stated that it was a difficult transition going from online to live tournament play, but one he preferred to moving overseas, as many of his counterparts have over the last couple of years.

“It’s been too difficult to do what a lot of my friends have done where they’re moving out of the country,” Wilke said. “All of my friends and family are [here]. My husband’s career is in Seattle, so for me I’ve mostly been playing live cash games.”

Over the last few years, Wilke has enjoyed some success at live tournaments across the United States. Near the end of 2013, he was able to play his way into the final table at the Caesars Palace Circuit Main Event and even had an impressive deep run at the WSOP Main Event this past summer.

Poker aficionados might remember him as the cheap leader in the Main Event on Day 4, who later ran cold and was busted on Day 5. This Circuit Main Event victory will go down as his 10th WSOP-related cash and brings his career earnings at live events to $240,000.

The Main Event of this tour stop for the World Series of Poker Circuit events had a $1,675 buy-in and began with two starting Day 1s. The first opening day brought in 166 players and a day later, 214 more entrants entered into the field for a total of 380 players. The prize pool created by the entries amounted to an impressive $570,000, which paid the top 45 players.

After both Day 1s were completed, Day 2 had only 72 players remaining, with an impressive roster of grinders vying for the title. Three-time WSOPC ring winners La Sengphet and Dan Lowery were the headliners, which also included Nathan Bjerno (2013 Casino Champion by Bike), and WSOP bracelet winner Sean Drake. When Day 2 began, Wilke was a modest 28th in chips. Sengphet fared the best of the bunch, excluding the winner, finishing in 14th place for $7,877.

Wilke took an impressive 2-to-1 chip lead into heads-up play at the final table against Barry Kay. During the fateful final hand, Kay opened for 200,000 and Wilke called. With a flop of 7-5-3 all hearts, both players checked. On the turn a 6c showed up and Wilke lead out for 300,000, with Kay coming over the top to 900,000. At that point, Wilke shoved to put his opponent all-in and Kay called. Kay showed 4s-Ts for the turned straight, but Wilke improbably had 8c-9c for a higher straight. With the Jh on the river, Kay finished in second place for $77,492 and Wilke had his first major win.