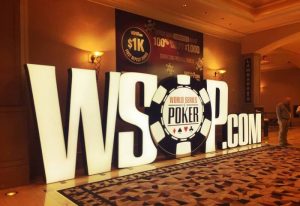 The World Series of Poker crowned three brand new gold bracelet winners on Saturday, one of whom you would probably assume had already won at least one in the past.

Saturday also saw the second and final starting flight of the Millionaire Maker, a tournament that drew over 7,000 entries, enough to ensure it will offer up the two biggest prizes of the WSOP so far.

Deeb emerged as the winner of the $10,000 Pot Limit Hold’em Championship event, breaking through a stacked final table to finally take his name off the list of the best players never to win a bracelet. The victory was worth $318,857, and came against a truly impressive field.

“This was one of the toughest final tables I’ve ever played against,” Deeb told WSOP.com. “This was the second time I’ve made the final in this $10K PLHE event, and to come out on top against these caliber of players was just great.”

Deeb wasn’t kidding about the level of competition. He defeated Paul Volpe in heads-up play, marking the second time this year that Volpe has finished as the runner up in a $10,000 Championship event (he also lost in the final of the Heads-Up No Limit Hold’em Championship).

Others at the final table included Jason Les, Sam Stein, Greg Merson, and Ismael Bojang (who already has three cashes at this year’s WSOP). Many other notables cashed, such as Tom Marchese, Josh Arieh, Todd Brunson, Matt Waxman and Connor Drinan.

Konstantin Maslak is ranked among the top 400 chess players in the world, holding the title of Grandmaster since 2008. Now, he can add the title of WSOP champion to his resume.

Maslak won the $2,500 Omaha/Stud Hi-Lo Split event, a mixed game tournament that ran an extra day after cutting the field down to three players on Friday night. The victory earned him $269,612, and marked his eighth cash at the WSOP.

Maslak, who took up poker in Russia after he saw some of his friends playing the game, now mostly plays online. However, he does have a number of cashes over the past five years on the European Poker Tour as well.

Other notables at the final table included two-time bracelet winner Viacheslav Zhukov (who also hails from Russia), who finished in fourth place, and bracelet winner Brandon Paster, who was sixth.

The final table took 11 hours to play, and offered up a number of storylines, including the potential for the first female winner of this year’s WSOP.

By Elizabeth Montizanti and Kitty Kuo went out in fifth and four places, and after Hutter beat fellow Florida native Benjamin Zamani in heads-up play, he had claimed his first bracelet and his third cash of this year’s WSOP.

“I’ve had a lot of chances to close out some big tournaments and have failed,” Hutter told WSOP.com. “I finally got one. [This victory] will kind of be a landmark of my poker career.”

After Day 1B of the $1,500 buy-in Millionaire Maker, the final numbers for the event have been established, and 7,275 total entries were received in this always popular tournament.

That’s a little short of the 7,977 that showed up for last year’s version of this event, but it’s still more than enough to give out some massive prizes to the top finishers.

While the WSOP’s official updates pegged Charles Sewell as the likely chip leader for Day 1B, their list of chip counts shows that Canadian Alexander Villa may have just beat him out by 2,700 chips, bagging 180,500 for the day. In any case, it looks like the largest stacks will come from Day 1A, where three players are listed as having finished with over 200,000.

There are 1,118 players still in contention in this tournament, and among them are a plethora of well-known professionals. To mention just a few, Brian Rast, Justin Bonomo, Calvin Anderson, Hoyt Corkins, Antonio Esfandiari, David Sands, Shannon Shorr, Cord Garcia, Maria Ho and Erick Lindgren are all still alive, many with very healthy stacks.

The action will continue on Sunday, when the money bubble should burst early, as 747 players will cash in this big field tournament.

Yet another Championship event started on Saturday, as the $10,000 Razz tournament saw 103 of the world’s best come out to fight for a bracelet in a game that is likely to scare away most amateurs.

At the end of Day 1, just 63 players remain, and the chip lead is shared by Brock Parker and Abe Mosseri, each of whom have exactly 140,900 chips.

You’d probably recognize a high percentage of the players in the field, so it comes as little surprise that there are plenty of notables among the leaders.

Shaun Deeb is currently in 5th place, while Dan Shak, Eric Wasserson, Bryn Kenney, and Jonathan Duhamel are all among the top 15 in chips at this point.

Two events will start up on Sunday, joining the Millionaire Maker and the $10,000 Razz Championship that are already in progress.

The first is the $1,000 Turbo No Limit Hold’em event. With a small buy-in and a fast-paced format, you can expect a pretty big field in this one, especially after how popular last weekend’s Hyper Turbo event proved to be.

Later in the afternoon, the $3,000 Limit Hold’em Six-Handed event will begin. Limit Hold’em events generally draw smaller fields, but many pros may be drawn to the shorthanded format, so there could be plenty of bracelet-hunting notables to watch for in this tournament.