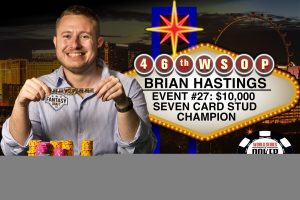 Brian Hastings was one of four winners on a busy Saturday at the World Series of Poker. (Image: WSOP Official Winner’s Photo)

The World Series of Poker awarded four gold bracelets on Saturday, the largest single-day haul yet at this year’s WSOP.

Between those events ending and the second flight of the Monster Stack, that made Saturday one of the busiest days on the WSOP calendar so far this year.

While the tournament drew only 91 players, they included many of the world’s best Stud specialists and all-around poker players, making this a sweet victory for the Pennsylvania poker pro.

“This tournament is more meaningful because it’s what a lot of the older, more established players played for many years,” Hastings told WSOP.com. “Anytime you win, it feels good.”

Hastings had to fight his way through an extremely strong final table in order to take down the event. In heads up play, he battled against Scott Clements, who himself was looking for his third career bracelet.

When we talk about fields of thousands of players at the WSOP, we’re always discussing Hold’em tournaments. At least, that was true until this week, when a $1,000 Pot Limit Omaha tournament drew 1,293 players, enough to make it the largest non-Hold’em event in live tournament history.

After three days of play, Aaron Wallace emerged as the winner of this historic tournament, claiming both his first WSOP bracelet and a $226,985 prize. This was Wallace’s first ever WSOP cash; an amateur player, he won a $175 satellite in the days before the event, then made the most of his entry.

“That’s how I do any tournament I’ve ever played, just satellite in,” Wallace told WSOP.com. “So any cash I’ve ever had, I’ve satellited in.”

H.O.R.S.E. is a game that requires a player to demonstrate a variety of poker skills. In this case, the five games that make up this mixed contest were joined by a sixth skill, patience, as the tournament drifted into an unplanned fourth day of play.

Ghaneian came back on Saturday as one of three remaining players, but had to battle for more than three hours to finish off David Levi and Robert Campbell before he could celebrate his victory.

Ghaneian has now cashed ten times at the WSOP, and had finished as high as eighth in the past (in a 2005 Pot Limit Hold’em tournament). But none of his WSOP experiences can match up to this one: both because he won and due to the fact that his wife is about to give birth to twins.

“It’s been a hard road,” Ghaneian said. “Each time I saw [my wife] here or she sent me a text, she would say, ‘I know you’re going to win this, I can feel it.’ She’d never said that to me before, not like that.”

The $5,000 Eight-Handed No Limit Hold’em tournament produced one of the strongest final tables yet, with numerous well-known pros battling for both the title and one of the bigger prizes awarded so far at this year’s World Series.

But in the end, they were all beaten out by a high school football coach from Florida.

Jeffrey Tomlinson navigated his way through a very difficult final table to win his first ever WSOP bracelet as well as $567,724 in cash. The win came against a plethora of well-known pros, including Dan O’Brien, Anthony Zinno, Jonathan Little and Jonathan Jaffe, all who finished in the top eight.

In the end, Tomlinson had to survive a long, hard-fought heads-up contest against French poker pro Pierre Milan, who was looking for his second career bracelet. But it was Tomlinson who got the best of him, just as he had against more experienced players throughout the entire tournament.

“I don’t have any fear,” Tomlinson said after his victory. “I mean, I’m here to play my game. It doesn’t mean I’ll win ten gold bracelets, but from the moment I sat down I knew I could win.”

Participation in the Monster Stack may be down from last year, but it still attracted nearly 7,200 players over its two starting fields to create one of the biggest prize pools yet this year.

In Saturday’s Day 1B action, Nick Maimone bagged the biggest stack, taking 240,200 chips into Day 2. Plenty of notables had a good day as well, including Joe Serock, Brock Parker, and JC Tran, all of whom were among the top 100 at the end of the day.

Saturday also saw the start of the $10,000 No Limit Deuce-to-Seven Lowball Championship, a tournament that traditionally draws a small but highly-skilled field of top professionals.

This year, just 77 players bought in to the event, and after the first day of play, 32 remain in contention for this prestigious bracelet.

Leading the way is Nick Shulman, who has nearly lapped the field with a stack of 229,000 chips. His closest competitor, Dan Smith, has only 121,900, putting Shulman in a pretty comfortable position heading into Day 2.

Not far behind Smith are Shaun Deeb, Mike Watson, and Jon Turner rounding out the top five in the chip standings. Erik Seidel, George Danzer, Billy Baxter and Huck Seed are among some of the biggest names who are also still in contention.

After watching four tournaments end on Saturday, Sunday will provide a bit of a break: there should be no new winners crowned during the day. But there will be two more events kicking off on Sunday to liven up the action.

At noon, another $1,000 No Limit Hold’em event is starting up, which should prove to be a popular tournament despite starting at the end of the weekend. A smaller field is expected for the $3,000 Pot Limit Omaha Hi/Lo event, which begins at 4 pm.

How is Brian Hastings allowed to play in the WSOP. He is known as a cheater and swindled many players out of their winnings illegally on Poker sites. It is well known he and two other poker players (Cole South) and the other guy who doesn’t show his face anymore. They were playing against one player when their was three of them. This is considered cheating on all platforms of poker , but somehow this guy is allowed to show his face as a bracelet winner let alone be allowed to play in the WSOP.

The other guy was Brian Townsend by the way.