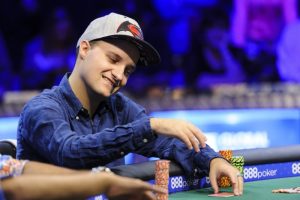 WSOP bracelet winner Ryan Laplante is going to teach the world how to play like a pro after signing with online training site, Run It Once.

Laplante has just short of $1 million in live tournament earnings, but he made his mark on the game in 2016 by winning his first bracelet in the $565 Pot Limit Omaha (PLO) event.

As well as showing off his four-card poker skills, Laplante was a member of the CardsChat all-star team.

Leading the way as the top earning player among a collection of community members and industry insiders, Laplante was on hand to offer his expertise as one of the top rising stars in the game.

Off the back of his exploits at the 2016 WSOP, Laplante is now using his knowledge to teach members of Run It Once.

Drafted in as one of the site’s “Elite MTT” coaches, Laplante will be running through his hands and breaking down situations he faces in some of the toughest online tournaments in the world.

With more than $1.6 million in online earnings, Laplante is a familiar figure in the biggest games and his first video for the site shows him in a deep stack $1,000 MTT.

The news was first announced by Run It Once, the training site founded by one of the original high stakes online stars, Phil Galfond. Although training sites aren’t as popular as they once were, Run It Once has managed to compile a strong roster of pros.

From Galfond and Laplante to Ben Sulsky and Jason Koon, there’s a massive amount of prize money and talent on the site. But, in an age where online poker sites are pushing to attract novices with passing interest in poker, are training sites still important?

We Need to Retain Players

Even though the demographics might be changing, training sites still have a role to play in the growth of poker.

Using sports stars such as Cristiano Ronaldo, Neymar or Boris Becker is great for appealing to casual players, but keeping players at the felt takes more than fancy faces and high octane games.

As it was when online poker was in its infancy, players want to learn how to win once they’ve got a taste for the game. Because of this, training sites will always be relevant and that means players like Laplante have a stake in the future of the game.

Of course, with each video he makes it’s unlikely Laplante will have the weight of the poker world on his shoulders, but if he can teach the community a thing or two then he will have succeeded.

Ryan is an amazing tournament player – and an amazing person as well!