The WSOP has announced it will be bringing back 888poker as a lead sponsor for the 2017 series. This marks the third consecutive year the poker site has partnered with the World Series of Poker. 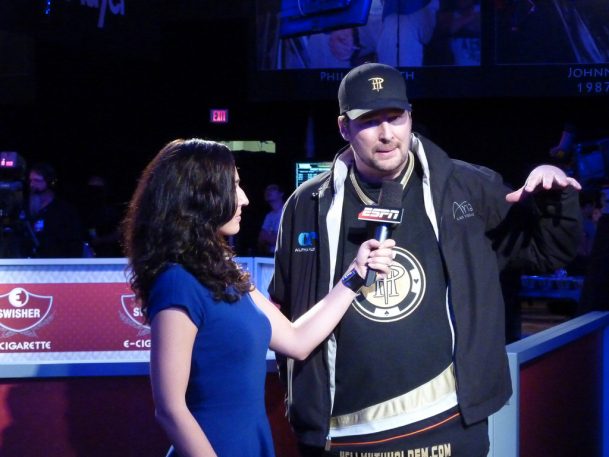 Kara Scott, shown here interviewing Phil Hellmuth during a WSOP broadcast, will be back as a commentator for the 2017 World Series of Poker. (Image: picssr.com)

When the series begins in late May, 888poker will have its logo stamped all over the convention center at the Rio All-Suites Hotel in Las Vegas. The partnership also includes exclusive television sponsorship rights.

Kara Scott, an 888poker brand ambassador, will provide commentary on ESPN along with Norman Chad and Lon McEachern during the Main Event. She has extensive broadcasting experience, hosting major poker events such as the Aria Super High Roller Bowl and the WSOP.

888poker took over as a lead sponsor in 2015 after DraftKings was removed due to legal issues in Nevada. The poker site is the only place online players outside the United States can satellite into WSOP events.

On WSOP.com in Nevada, players will have opportunities to enter satellites into numerous WSOP events over the coming months.

International players hoping to earn a seat in a 2017 World Series of Poker event will have to win it on 888poker. A full list of satellites hasn’t been announced.

Many players who sport the poker site’s patch while playing have made deep runs in WSOP events the past couple of years. That includes 2015 Main Event champion Joe McKeehen. The Pennsylvania native is a brand ambassador.

Parker “TonkaaaaP” Talbot, one of the most popular poker live streamers, is the most recent addition to Team 888poker.

No poker site can come close to matching PokerStars in terms of popularity. But 888poker has grown exponentially in the past few years thanks in large part to more exposure from the WSOP.

The poker site, owned by 888 Holdings, originally launched in 2002. Founder Avi Shaked still owns roughly half of the business.

Last year, 888poker sponsored a WSOP called the $888 Crazy Eights 8-Handed No-Limit Hold’em championship. The tournament, which will be back this summer, guaranteed an $888,888 first-place prize.

888poker now ranks second in the world for online poker site traffic. The company claims to have over 10 million members worldwide with a new players signing up every 12 seconds.

Worst poker I’ve ever played! Never have I played poker and got 25 to 30 shit hands in a row. So I decided to never play WSOP again…..What a shit game

Phil Hellmuth will be commentator? He lost all money? Watch all WSOP from 2010 and dont saw him..