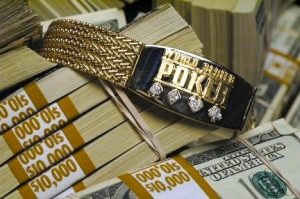 A WSOP bracelet tournament will be offered online this year, with the final six players asked to come to the Rio to play out the final table live. (Image: WSOP.com)

WSOP 2015 is taking on exactly what makes sense for the operator that is the heart and soul of Nevada’s online poker industry: an Internet event that will ultimately morph into its live counterpart at the Rio All-Suite Hotel and Casino in Las Vegas during this year’s tournament series.

The World Series of Poker loves to try new things every year, and the online bracelet event that they’ve promised to players is definitely going to be one that will be watched closely by the poker community.

In order to give the final players a more authentic WSOP experience, however, organizers announced that the final two players would be heading to the Rio just off the Las Vegas Strip to play heads-up live for the bracelet. Now, organizers are planning to expand this idea, bringing back an entire table of players for the final phase of the hybrid online-live event.

According to a report by pokerfuse, WSOP organizers are now seeking approval from the Nevada Gaming Control Board in order to bring back the final six players to battle it out live, a move that would allow the final table to play out in front of an audience like any other WSOP event.

The tournament, Event #64 on this summer’s schedule, is listed as the $1,000 WSOP.com Online No-Limit Hold’em tournament and begins on Thursday, July 2. Players throughout Nevada are eligible to play in the tournament, which will be held entirely online until that final table is reached.

Originally, the plan was to have the final two players come back on July 3 to play out the heads-up battle, but assuming the change is approved, the finale will now take place on July 4, allowing competitors more time to travel.

“We had concerns initially of getting the players to the Rio the next day to play out the event live,” Caesars Interactive Entertainment Vice President of Corporate Communications Seth Palansky said to pokerfuse. “But we’ve decided that July 3 will be a ‘travel day’ in essence for any players not in proximity to Las Vegas. As such, we will play the final table on July 4 now.”

That change, Palansky said, will help organizers ensure that all of the live participants can make it to Las Vegas on time. Other than that, the WSOP has declined to comment on the likely change, saying that it will release details once the operator receives final regulatory approval.

The online tournament was just one of several innovative events that the WSOP has announced for this year’s festival in an attempt to continue growing the tournament series.

Many of these new events seemed designed to capture more mid-stakes, mass-market players: for instance, one of the first events on the schedule is the $565 buy-in Colossus tournament, which allows reentries and has a $5 million guaranteed prize pool.

The WSOP has already shown a willingness to make adjustments to events on the schedule, too. Most notably, organizers originally planned to offer a $10 million guarantee to the winner of the WSOP Main Event, repeating the top prize that was guaranteed in 2014.