WSOP AND One Drop Team Up for $1.1 Million Recreational Event in Monte Carlo 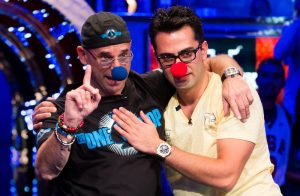 The World Series of Poker’s (WSOP) relationship with One Drop just became a little more interesting thanks to the creation of a new tournament series featuring another seven-figure spectacle.

Guy Laliberté’s One Drop, which works to provide clean drinking water to impoverished countries, has been working with the WSOP since 2012.

The inaugural $1 million WSOP Big One for One Drop attracted 48 players and, when the chips had fallen, it was Antonio Esfandiari who walked away with the bracelet and $18,346,673.

Two years later the second $1 million event took place in Las Vegas with 42 players anteing up the seven-figure entry fee in a bid to become the Big One for One Drop champion.

On that occasion Daniel Coleman took home the title and now, two years after the fact, we’re set for another nosebleed showdown.

A $1.1 Million Event for Recreational Players

However, unlike the previous two tournaments, the next Big One for One Drop won’t cost $1 million. In fact, it won’t even take place in Las Vegas.

According to Laliberté, the tournament will be part of a weeklong festival in Monte Carlo that will aim to raise money for his charity.

Set to be called the Monte-Carlo One Drop Extravaganza, the festival will run from October 13 to October 17, 2016, and take place inside the plush confines of the Casino de Monte-Carlo.

Despite being the home of the rich and famous, Laliberté wants this tournament to be for “recreational” players!

Now, before you get too excited, there are two things to consider. Firstly, a recreational player’s bankroll won’t stretch too far in a town like Monte Carlo.

Secondly, entry to the tournament will be by invite only and the so-called “recreational” players will be a mixture of businessmen, celebrities and philanthropic individuals.

Taking Pokertainment to the Next Level

Laliberté’s aim is to create a TV spectacle that appeals to a broad audience and the way to do this, in his opinion, is to have a selection of famous (and probably already rich) people ante-up in the €1 million ($1.1 million) showdown.

“Our vision is to broaden the appeal by creating a tournament that is both ultra-exclusive and lots of fun,” said One Drop CEO, Catherine B. Bachand.

Naturally, to ensure the poker on display isn’t too amateur, a selection of pros will be drafted in to act as coaches to the recreational players.

While the closed format might irk some who see the mega buy-in event as a lucrative opportunity, there’s no doubt it will pique the interest of mainstream media outlets.

To quell the appetite of the well-bankrolled pros who wish to attend the charity-based festival, the WSOP and One Drop will also be organizing a selection of side events and cash games.

The combination of glamorous surroundings and rich recreational players will certainly entice many of the game’s top pros to head to Monte Carlo for some high stakes action in October. However, if you fancy joining the fun yourself, you can check out the schedule here.