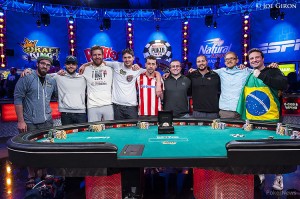 The November Nine final table of the 2014 World Series of Poker Main Event is set, and it’s one of the most interesting lineups in years.

The current payouts are listed as follows, with every player guaranteed at least the money for ninth place. Each of the nine men will walk away with that $730,725 and return in November to play for more.

(Interest accrued during the break will be added to the payouts before the November Nine begins.)

Six countries are represented at the table, more than any other November Nine since the concept began.

Mark Newhouse becomes the first player to ever make two November Nine final tables, much less back-to-back events. He finished ninth at the 2013 WSOP Main Event final table, but is poised to make a much deeper run this year.

Martin Jacobson is the most accomplished player at the final table, having accumulated more than $4.8 million in live tournament earnings alone prior to the Main Event. The guarantee of ninth place money in this tournament pushes him over the $5.5 million mark.

Stay tuned for more details tomorrow on the players, leading up to what will undoubtedly be an exciting November Nine.

Day 7 was the final day that all players gathered together to play down to the November Nine. There were 27 players to start the day on Monday but only nine seats available at the final table.

Play started at a faster pace than many expected. With payouts at $286,900, there were several casualties at the start of the day:

The final 18 players then redrew to two tables and played on with $347,521 guaranteed for the next three bustouts. They happened to be:

The next three spots paid $441,940, and those who captured payouts at that level were:

Action slowed a bit at that point, until William Pappaconstantinou doubled through Christopher Greaves, leaving the latter crippled with just 150K chips. The latter then moved all-in against Jacobson and lost to capture $565,193 for 12th place.

Just a few hands later, Maximilian Senft lost his stack of chips to Mark Newhouse, forcing the former out in 11th place for $565,193.

The final 10 players then redrew for seats at the one remaining table, and action moved along with William Tonking doubling through Martin Jacobson on the sixth hand of play. About 10 hands later, Andoni Larrabe doubled through Luis Velador, forcing the latter to the bottom of the leaderboard with just 10 million chips. Velador lost even more chips in a subsequent hand with Tonking, pushing him down to 6.8 million. Velador then risked his short stack with pocket fours but ran into the pocket fives of Mark Newhouse. Both made full houses with three aces on the board, but Velador’s was only good enough for a tenth place exit from the tournament, worth $565,193.

And then there were nine. They will return to Las Vegas in November seated as follows, with these corresponding chip stacks: