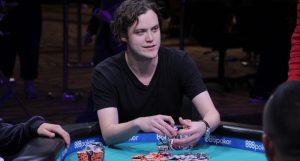 Michael Ruane is a member of the 2016 WSOP November Nine. (Image: cardplayer.com)

Michael Ruane is a surprising member of the 2016 WSOP November Nine. The New Jersey resident has never gone this deep in a major tournament.

He’ll be in unchartered territory on October 30th when he sits down at the final table in Las Vegas.

The live ESPN cameras will be rolling and Ruane will have to show the world he doesn’t wilt under pressure.

Until now, he’s never been in this position. He had never sat at a featured television table prior to the Main Event.

With that said, don’t automatically assume Ruane will fold under pressure. He didn’t in July while the cameras were rolling. He held his own, up against some stiff competition. Why should anyone expect things to be different at the final table?

Ruane, a 28-year old from Maywood, New Jersey, doesn’t have many live tournament cashes recorded. Prior to the Main Event, he had three total WSOP cashes since 2011 but none for more than $13,934.

But he is no bum off the streets. He only played in two WSOP events this summer, but he is a poker pro. Ruane just doesn’t have the live tournament experience of some of the other players who made a deep run in the Main Event.

That doesn’t mean he isn’t as talented.

Like many players who have gotten this far, Ruane began playing poker after watching the game on TV. He was an online pro who, like so many others, was negatively impacted by the Black Friday scandal in 2011.

Due to a lack of online poker being available in the United States, he moved overseas to Europe so he could play online. That is when he also competed in live European Poker Tour events.

Since Black Friday, he’s spent time all over the world, from Europe to Costa Rica. But here he is back in the United States making more money than he ever could have dreamed. And, if things go his way at the final table, he could go from a $1 million winner to an $8 million winner.

Ruane will start with 31,600,000 chips, fifth best at the table. In comparison, Cliff Josephy leads the way with 74,600,000. Ruane has plenty of chips, plenty of talent, and we’ll see if he is dealt plenty of cards when the final table begins October 30 on ESPN.