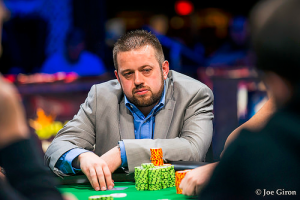 Kenny Hallaert is a member of the 2016 WSOP November Nine. (Image: ESPN)

The 2016 WSOP November Nine was set back in July. Kenny Hallaert is one of those lucky contestants who will be competing for $8 million at the Main Event final table at the Rio in Las Vegas on October 30, with the being champion crowned on November 3rd.

ESPN will televise the final table in its entirety on a 30-minute delay. Hallaert will be in seat 9 when the cameras begin rolling. He’ll start with the 43,325,000 chips he bagged when play concluded in July.

That’s good for fourth best at the table, and about 31,000,000 fewer than chip leader Cliff Josephy’s stack size. Needless to say, he’s in good position to make a run at the most coveted title in poker.

For the second straight year, a Belgian will be at the Main Event final table. Pierre Neuville finished 7th in this event in 2015. Hallaert, a fellow countryman, hopes to go even deeper.

Coincidentally, Hallaert is right behind Neuville for 2nd place on Belgium’s all-time live tournament winnings list. Davidi Kitai tops the charts, but Hallaert would take over the lead if he wins the Main Event.

If you previously doubted Hallaert’s poker talent and have been watching ESPN’s WSOP coverage the past few weeks, you no longer question his ability. The 34-year old was has been featured in numerous hands and proved he has game.

Hallaert had more than $1.3 million in live tournament winnings to his name prior to the start of the Main Event. His biggest claim to fame before 2016 was in the 2015 Colossus at the World Series of Poker. He finished 5th out of a record 22,374 players.

The poker pro has numerous five and six-figure wins since 2009 including a 6th place finish in the 2011 EPT Deauville Main Event ($210,962). The closest he’s come to winning a WSOP bracelet was in the inaugural Colossus event.

But all that could change on November 1st.

His Time to Shine?

Hallaert has been a spectator at the Main Event final table the past few years, cheering on his friends. Last year, he railed Neuville, hoping to see a fellow Belgian take down the world’s most prestigious poker tournament.

Two years ago, he cheered on Jorryt Van Hoof, but was unable to will him to victory. Van Hoof finished 3rd. In 2013, Hallaert was rooting hard for another buddy, Michiel Brummelhuis right up until he busted in 7th place.

Hallaert is hoping for a better outcome than his friends had. It’s now his time to shine. Can he do it? Stay tuned to ESPN and CardsChat starting October 30 to find out.