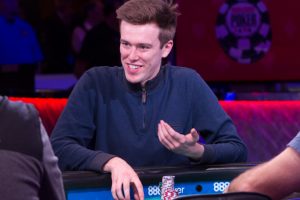 Gordon Vayo is a member of the 2016 WSOP November Nine. (Image:
worldpokertour.com)

It’s been a memorable year for 2016 WSOP November Nine member Gordon Vayo. One he’d like to repeat many times. It all started in June at the World Series of Poker in Las Vegas.

He cashed an impressive eight times during the summer series. But the last tournament he played, the Main Event, he made his deepest run and he hasn’t busted yet.

Even better, Vayo will have both players on his right at the table. That will give him an opportunity to push around the small stacks without the bigger stacks interfering.

Vayo is guaranteed $1 million should he become the first casualty at the final table. But the 27-year old San Francisco resident has his eyes set on the $8 million 1st place prize and the coveted gold bracelet.

The poker pro hasn’t just been sitting around watching TV and eating Cheeto’s since earning a spot in the November Nine back in July. He’s spent some of his time working on his game in preparation for the most important moment of his poker career.

He Keeps on Winning

Winning at least $1 million is life changing money for nearly everyone. But Vayo hasn’t stopped there. In September, he took down the $2,500 Main Event at The River Series in Thackerville, Oklahoma. That victory made him $587,120 richer.

During the summer WSOP session, he cashed a total of eight times. His deepest pre-Main Event run came in Event #19, the $1,000 Pot-Limit Omaha championship (18th place).

His biggest win this summer before the Main Event was $17,176.

The Resume Checks Out

Although he’s just 27 years old, Vayo has been grinding poker games online and offline for many years. After honing his craft as a poker player but lacking the financial means to continue playing, he sought the backing of fellow November Niner, Cliff “Johnny Bax” Josephy, who is an online legend.

He took Josephy’s money and ran it up to more than a $1 million profit on PokerStars. Along the way, he had some success as a live tournament player as well. His first six-figure payday came in a 2012 WSOP $1,500 no-limit tournament, finishing 4th place for $121,262.

On October 30, he’ll have another opportunity to chase his first WSOP bracelet. But he’ll have to beat out his former mentor Josephy, a two-time bracelet winner, to make it happen.

The guy has great talent. 27 years and the results.