After nine years of the November Nine, the World Series of Poker (WSOP) is bidding the concept of holding off on Main Event final table play until the fall adieu. In press releases Monday from both WSOP and Poker Central, the Series says it is going back to the old way of doing the Main and playing it all out in July. 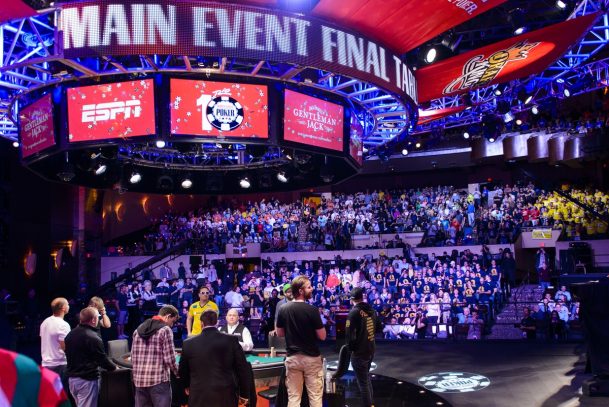 The WSOP has announced that ESPN will televise the Main Event (seen here in 2015) live starting on Day One. (Image: espnfrontrow.com)

TV and streaming coverage, however, won’t be going back to the old days, when weeks of editing preceded the airing of the Main Event on ESPN. And those aren’t the only major changes announced just two weeks before the start of the annual poker series.

ESPN and the World Series of Poker have extended a partnership agreement through 2020, and Poker Central will also get in the mix. Seth Palansky, vice president of corporate communications for Caesars Entertainment, announced in a press release a new broadcast schedule for July’s Main Event.

The most prestigious annual poker tournament will get underway July 8 as planned. But instead of bringing the final table back in November, as has been the case since 2008, a champion will be crowned July 22.

For the first time, ESPN will cover the event live through its entirety. Last year, the “worldwide leader in sports” only aired an edited version of play beginning on Day Four and a live broadcast of the final table.

ESPN has committed to 40 hours of Main Event live coverage and 130 hours of original packaged shows. Poker Central will air livestreamed WSOP events, including the Main Event, during times ESPN isn’t broadcasting. The poker network will announce its schedule shortly before the series begins.

There will be the familiar faces in the broadcast booth who have made the WSOP known around the world . Norman Chad, Lon McEachern, and Antonio Esfandiari have handled the live commentary duties together on ESPN in recent years. But there could be a slight change.

“There might be parts of the Main Event coverage that airs on Poker Central in which one or all of us are not in the booth,” Chad told CardsChat by phone on Monday. “Plus, obviously, when Antonio is playing on Day One (and beyond), he will not be in the booth.”

Last year, heads-up play between eventual Main Event winner Qui Nguyen and Gordon Vayo lasted into the wee hours of the morning. When asked if ESPN would send the coverage over to Poker Central for the conclusion should that occur this year, Chad said, “my guess is it stays on ESPN,” but he wasn’t certain.

ESPN will begin its Main Event coverage on July 8 (Day 1A). The sports media giant will air the tournament daily for two to four hours on either ESPN or ESPN2, until the final table is achieved on July 17. There will then be a two-day break.

On July 19, ESPN will host a final table preview show from 10-11 pm EST. The final nine players will return to the Rio on July 20, with coverage beginning at 9 pm EST. Play will conclude when the tournament is down to six players. Three more players will be eliminated on the following day, and then a champion will emerge on July 22.

ESPN has faced some difficult times lately. The network recently laid off approximately 100 employees, some of whom were prominent broadcasters making millions.

The layoffs were made to cut costs. ESPN has billions of dollars tied up in contracts with the NBA, NFL, MLB, and NCAA. As a potential sports television bubble looms, executives in Bristol, Connecticut are cutting back. But won’t the new WSOP contract increase costs?

“In this new deal, Poker Central is picking up all production costs,” Chad said. “But, yes, there will be added costs in airing the Main Event live, in addition to the post-produced taped shows.”

After cutting back on Main Event production costs last year by waiting until Day Four to begin production, ESPN is going the opposite direction in 2017.

I actually believe this is an excellent idea to play the main table out as it’s going along in July. And two day break is fantastic, giving final 9 a chance to rest from the gruelling daily grinding and decision making trying to get to that point. IMHO, players getting coached and everything else in between has really affected the game, which some coyld argue maybe good, but also it could have been bad, as not have resulted in a true outcome, had it continued in July to completion. My only reason for this belief is that over the years of the November 9, many main event leaders don’t take down the championship when they return in November.

Waiting 4 months for the final table was the dumbest idea ever!! Self serving for the so called pro’s to make endorsement money. Finally someone has come to their senses and made the final table more like true poker. 3 days to go from 9 to 1 seems excessive. 2 days makes more sense.