It was a “good run” but not “the run,” vlogger and CardsChat forum poster Matt Vaughan said after being eliminated in 47th place out of 6,260 players in the WSOP’s $1,500 No-Limit Hold’em Monster Stack, which is playing down to a final table on Wednesday. 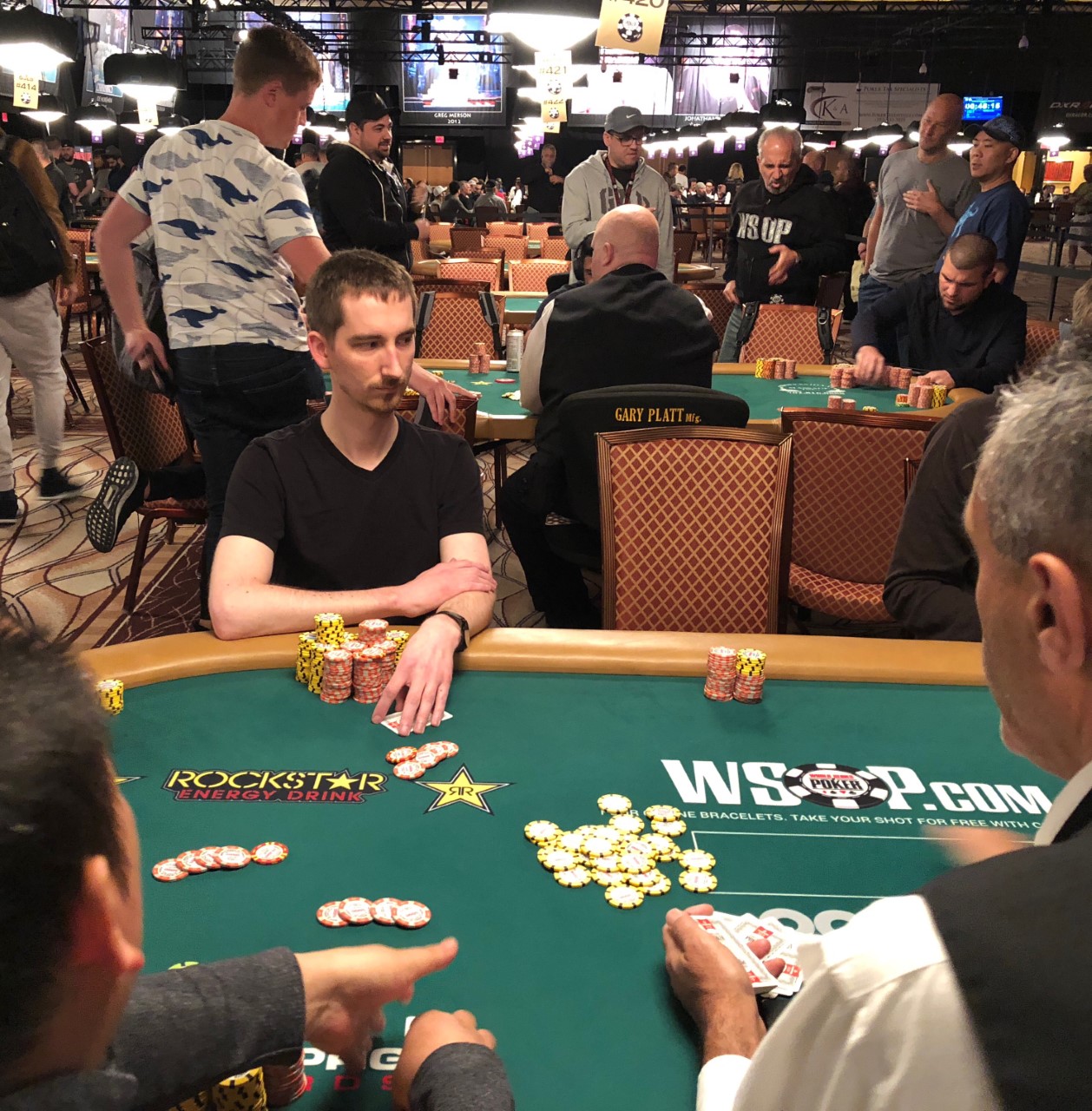 YouTube vlogger and CardsChat forum member Matt Vaughan made a deep, but not deep enough run in the WSOP $1,500 Monster Stack, as a man standing behind him (WSOP hoodie) expresses similar disgust at a hand. (Image: CardsChat News)

But still, he didn’t quite reach the life-changing money level, and for the Massachusetts native and current Baltimore-area resident who had enough chips late in the tourney to briefly see a more than $1 million 1st place prize within reach, the quick and harsh ending understandably stung.

If deflated enthusiasm is part of the game, Vaughan’s run in the Monster Stack captured a quintessential poker experience that repeats itself day after day, hour after hour at the Rio during the World Series of Poker.

It’s always unreal how fast these things can end… pretty annoying but I felt easy spot, and I’m stone crushed by a guy who covers me. Cold 4b jam 99 from BB vs SB 3b and BTN open. SB has KK and board gives me nothing. I know it’s a “good run” but thought it would be “THE RUN.”

From Crushing It to Crushed

Vaughan may have felt like he was on a roller coaster at Six Flags on Tuesday, not at a casino. His Day Three seemed as up and down as Bitcoin.

Vaughan began the day with a healthy 660,000-chip stack, well above average, but was quickly down to 280,000 after losing two straight coinflips. Before the first break, he was back to his starting stack, then up to 900,000 shortly after the break before again losing a massive pot to drop back to around 400,000.

“Chips have been flying around over here,” he told CardsChat on the second break of the day. “I played like three flips in the first two or three levels of the day. And then there was a hand I got in aces against kings and won that for almost 900k, and then almost immediately after that, I was in the big blind with ace-king, got it all in pre-flop against ace-nine, and he rivered a nine.”

Known on the CardsChat forum as “Scourrge,” Vaughan, a cash game regular, experienced the many highs and lows of tournament poker on Tuesday. The roller coaster ride continued throughout the session. His stack peaked at over 2.6 million at the final break before he was eliminated in 47th place when his pocket 9s in the big blind ran into pocket kings.

First emotion was just a bit of sadness about having to stop playing. Huge gratitude for how far I made it and to everyone who was following along and giving support. Celebratory beer, and then probably heading home for an early bed time.

For every joyful bracelet winner at the WSOP, there are countless individuals – “kids with a dream,” as Norman Chad would say – who suffer the agony of defeat. Vaughan experienced both emotions on Tuesday – earning a nice payday but losing out on an opportunity to become wealthy.

Finishing in 47th place out of 6,260 players — placing Vaughan well within the top 1 percent of finishers — is no small feat, even though in the end it didn’t deliver the $1 million he briefly believed was really in his reach.

Many know Matt from his poker vlogs on YouTube. He has over 10,000 subscribers, but other than for one video published this summer has been MIA the past few weeks.

“It’s pretty tough to do because I had been playing for 12- or 13-hour days recently,” he said.

He did say he plans to create a new vlog from his WSOP experience in coming days.

Vaughan’s videos usually take place from his hometown casino, Maryland Live. Most of the content is hand analysis, but he went off-topic in a recent vlog episode and addressed a controversial poker issue: Chris Ferguson’s pre-WSOP apology video.

Perhaps, Matt will have an opportunity to address this issue with Ferguson if the two end up at a final table somewhere this summer.

A monster stack in The Monster Stack! Good run there Matt!
donkaments… they’re fun but they suck.