After Ben Lamb and Jack Sinclair fell on Day 8 of the 2017 World Series of Poker Main Event, the remaining seven players from a 7,221-player field returned to play down to the final three. After Damian Salas, Bryan Paccioli, Antoine Saout, and John Hesp all saw their runs come to an end, only chip leader Scott Blumstein, Dan Ott, and Benjamin Pollak remained in contention for the $8.15 million first-place prize. 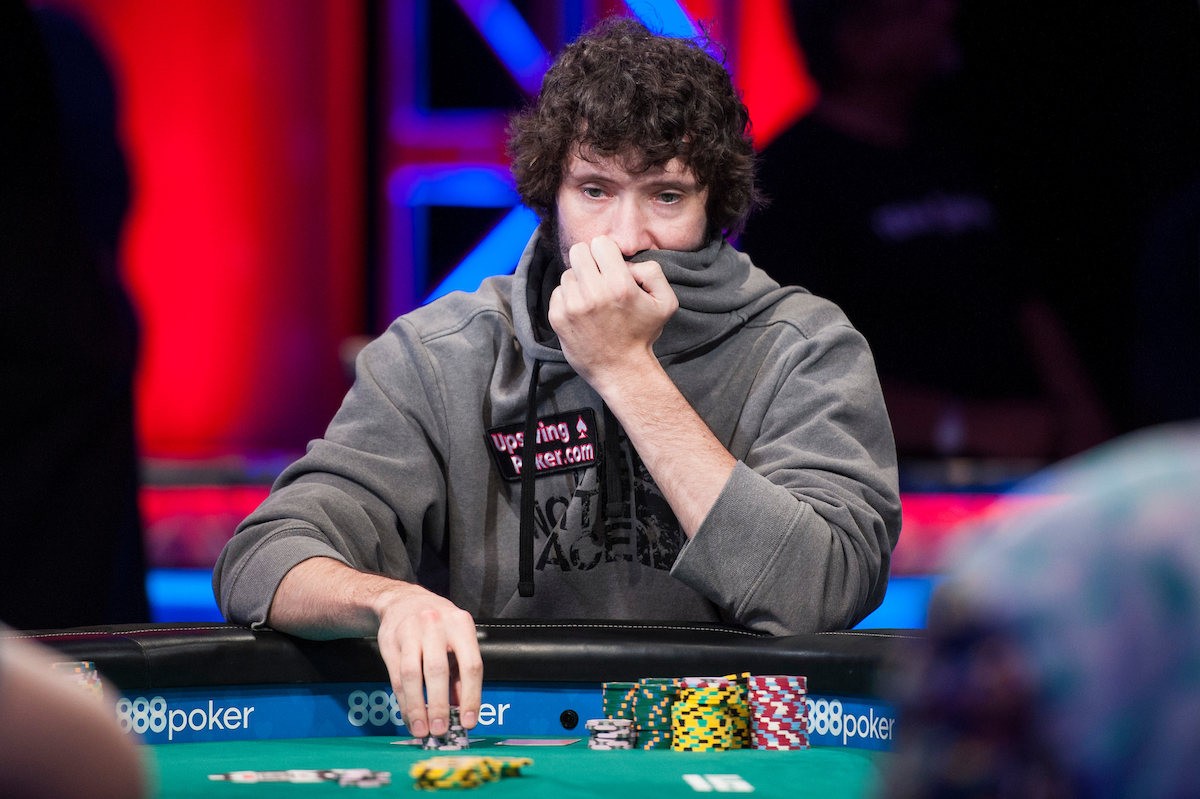 Dan Ott, a 25-year-old from Pennsylvania, in a familiar pose reminiscent of Jerry Tarkanian on ESPN’s live coverage of the WSOP Friday night, skillfully chipped up to keep himself in contention for the championship prize. (Image: Jayne Furman / PokerPhotoArchives.com)

Cry for Me, Argentina

When the flop fell A♥3♥2♦, Salas checked and Ott bet enough to put his short-stacked opponent all-in. Salas quickly called with the best of it, and while he held on the 6♦ turn, the 5♠ spiked on the river to give Ott a winning wheel.

“It was a great honor for me to represent Argentina and Latin America,” said Salas through an interpreter in his post-elimination interview. “I’m very proud of the way I played, and I hope that everybody in Latin America are happy with their representative.”

“Once you make it, you’re so exhausted from all the playing,” Piccioli said of his WSOP final table experience. “You aren’t human if you don’t need at least a little bit of rest and relaxation before all that. I wanted to study and prepare and do all these things, but it felt like there weren’t enough hours in the day. But I’m always ready to keep it going and going … I like let’s get to business, no coaching, no funny business, let’s just play cards.”

A J♣7♦6♣ flop saw both players check. Saout checked for a second time on a turn of 4♣. Blumstein, who made a straight, bet 5.6 million and Saout called with what seemed to be a well-disguised top pair, only to trip up and think his hand was even better thanks to a J♥ on the river. He checked, Blumstein moved all in, and Saout called off his remaining 26.1 million.

“So much difference in this one,” Saout told the media after his bustout. “At the beginning of the finale was two big stacks, and everyone else was short. So basically, there was no play since the beginning, everyone’s folding. There’s no flop, nothing, nobody defends blinds. It was this almost all the time. I survived most of it.”

The 33-year-old Frenchman notched his third impressive WSOP Main Event cash, this time $2 million for placing fifth, after taking third in 2009 for $3,479,669 and 25th last year for $269,430. Unfortunately for him, his first gold bracelet will have to wait.

Meanwhile, Blumstein, who started the day as the odds-on favorite, extended his chip lead.

Just 20 minutes after Saout fell, WSOP fan favorite John Hesp, who was on the wrong end of a cooler flop the night before, followed him out the door in fourth place. On Hand #135, after nursing his short stack for a while, the senior Brit in a colorful coat finally made his move, pushing all in with less than six big blinds for 11.95 million holding 9♣7♣ in the cutoff.

Pollak then moved all in over the top from the small blind with the A♦J♠ and Ott folded from the big.

Hesp, the fan favorite who had already won himself an extra million dollars by waiting out the previous eliminations, was behind but drawing live. A flop of K♠10♠6♥ gave him a gutshot straight draw, and after a nothing 4♣ on the turn, Hesp and his fans held out hope for any 7, 8, or 9 to keep him alive.

Alas, a 4♥ on the river saw his inspiring run come to an end. Hesp, who went from playing $10 bar tournaments to checking an item off his bucket list, walked away with $2.6 million and the admiration of the entire poker world.

“I’ve lived the dream. I absolutely loved it, and I just hope that I’ve spread a little bit of light, happiness, and fun in the game,” Hesp said addressing the media one last time. “I play poker recreationally and I’ll continue playing it recreationally. I won’t be turning professional poker player. I want to stay an amateur, I want to stay having fun.”