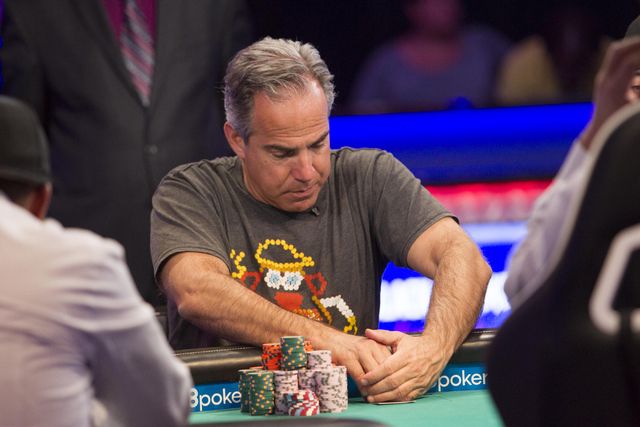 Cliff Josephy, at 50, would be the oldest winner of the World Series of Poker Main Event since Noel Furlong, at 61, won in 1999, if he pulls off a win on Tuesday night. He’ll have to come from behind, as he starts play today with only one-quarter the chipstacks of leader Qui Nguyen. (Image: Richard Brian/Las Vegas Review- Journal)

When the final day of play resumes on Tuesday evening at 6 pm PST/9 pm ET on ESPN (with a 30- minute delay from live play), Nguyen will have a commanding chip lead. He entered the second day of the final table with that lead and extended it with a confusing style of play and some fortunate flops on Monday.

Nguyen, a baccarat player and low stakes poker cash game player in Las Vegas, has never been in a position to win a major tournament, let alone the most prestigious poker event in the world. His largest cash prior to the Main Event was for $9,029 in a 2009 WSOP event, which just so happens to be the last and only other time he cashed at the World Series of Poker.

It’s hard to say anyone who just won $1,935,288 had a disappointing end to their tournament. But many expected a stronger finish for Vojtech Ruzicka after his impressive performance throughout much of the day on Sunday.

The Czech player ran into some bad luck on Monday. After bluffing into Josephy’s set of eights, his stack dwindled down to less than one big blind after he again bluffed into a set of eights, this time against Vayo. He was eliminated in 5th place by Nguyen a hand later.

Nguyen doesn’t appear to have any rhyme or reason to his madness. ESPN commentator and poker pro Antonio Esfandiari appeared puzzled as to the November Niner’s style of play.

The Nevada resident who hails from Vietnam often chose to raise with a marginal hand such as 9-10 in early position, but then folded that same hand in late position. But this style of play worked like a charm. He kept his opponents guessing, and often got a more experienced player like Josephy to fold the best hand.

When Nguyen called off big bets, he had the goods. Michael Ruane busted out in 4th place ($2,576,003) when he shoved his small stack in with K♥Q♥. The bet was for less than 10 percent of Nguyen’s stack, and for some odd reason, he tanked for over a minute before deciding to call with A♥J♠. Esfandiari, and likely most viewers, wondered why he took so long to make such an easy call.

The board ran out 9♠2♠9♥J♣8♦, giving the chip leader the winning hand, a knockout, and an even bigger chip advantage.

What They’re Playing For Tonight

One of the three remaining players will be crowned world champion on Tuesday. A WSOP bracelet will also be handed out to the winner.

For Vayo and Nguyen, the bracelet would be the first of their career. Josephy, who at 50 is the oldest player at the table, is going for his third career bracelet.

The winner will receive fame, fortune, and a banner at the Rio Convention Center during the World Series of Poker for years to come. Oh, and $8 million, which is pretty sweet, and more than $300,000 more than last year’s winner Joe McKeehen took home.

The bejeweled Main Event bracelet is worth half a million bucks all on its own, making it the most expensive trophy of any sport anywhere.