With millions of dollars at stake in the WSOP Main Event, things can get a little tense. During Day 1B on Sunday, competitors Tony Bracy and Lazaro Hernandez got into an altercation over the latter player texting during a hand. 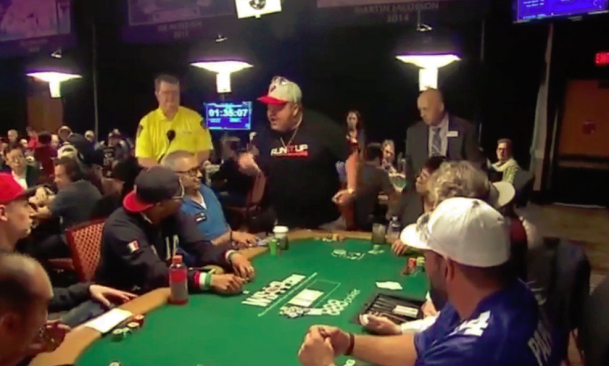 Tony Bracy (seat 5) and Lazaro Hernandez (standing up in seat 7) got into an altercation, leading to a suspension, during Day 1B of the 2017 WSOP Main Event. (Image: ftw.usatoday.com)

Insults, racial slurs, and threats were made and both players were given a penalty.

During ESPN’s live broadcast of the tournament, cameras wandered over to the table where the altercation took place. An angry Hernandez, in seat 7, stood up and yelled profanities at Bracy in seat 5.

The dispute, according to all reports from those at the table, was over Hernandez, a Florida native, texting during a hand. Bracy felt he was slowing down the action and the dealer shouldn’t have allowed it to happen.

When Bracy laid into his opponent, Hernandez gave him a piece of his mind. ESPN’s Joe Stapleton made his way to the table to find out what went down.

“You got some guys in here that don’t know the rules of poker,” Bracy said. “And he’s on his phone. We’re all involved in a hand, he’s on the phone so I ask the dealer to control the game. The guy just loses his mind. He said ‘talk to me like a man.’”

“The next thing you know he said ‘let’s go outside,’ he continued. “He uses the N-word and all this other crap.”

“Was there anything leading up to this?” Stapleton asked.

“He just exploded. Nothing,” Bracy responded. “He’d been on his phone the whole time, so I told the dealer, hey, control the game.”

Bracy, the 38th place finisher in the 2016 Main Event, said Hernandez flipped out on him because he felt Bracy was tattling on him for texting. The African-American, claims his opponent called him a racial slur during the argument.

Both players were given a penalty for their role in the altercation. Bracy received a one-round suspension. Hernandez, prior to being escorted out of the Amazon Room at the Rio by security, was penalized three rounds.

Hernandez challenged Bracy to a fight and Tony responded by calling him “fat” and told him to “go eat a Twinkie.” No, this wasn’t an argument between third graders. These really are grown men.

Years before Bracy versus Hernandez, 12 to be exact, there was Matusow versus Sheikhan at the 2005 World Series of Poker.

Mike “The Mouth” Matusow and Shahram “Sheik” Sheikhan battled for hours in one of the most memorable televised WSOP feuds of all-time. The dispute lingered all day, but there was one hand that caused both players to be penalized.

Matusow raised pre-flop and was called by the player in the cutoff. Sheikhan, nursing a small stack, pondered his decision to move all-in or fold. He opted for the latter.

After the flop was turned over, Sheikhan slammed the table in disgust, suggesting he would have hit the flop.

“He pounded the table. That’s inappropriate. He’s indicating he would have gotten part of that flop,” ESPN commentator Norman Chad said.

Matusow agreed and scolded Sheikhan, letting him know, “we’re in a hand, you need to shut the f*ck up.”

Sheikhan called for The Mouth to be penalized for swearing. After winning the pot, Matusow screamed at Sheik for talking about what he had in the middle of a hand. Tournament official Jack Effel came over and penalized both players.

Tempers often flare during poker’s most prestigious event. Not everyone can handle acting like an adult during tense situations.