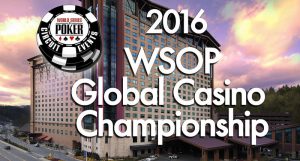 Last year’s tournament was televised on tape delay on ESPN and featured one of the game’s top pros at the final table, Daniel Negreanu. Kid Poker finished 6th.

The WSOP Global Casino Championship is a freeroll to some, but all players must earn a seat. Entrants will be competing for a share of at least $1 million. Only 100 free seats will be awarded, and the rest must buy-in for $10,000.

Winning the tournament is worth more than money. A WSOP gold bracelet is also up for grabs. This will be the final United States WSOP event of the year prior to the start of the November Nine.

Who Gets a Seat?

A ticket to the WSOP Global Casino Championship can’t be found in a Willy Wonka chocolate bar. Sorry, Charlie. Instead, a spot must be earned at the poker tables.

50 automatic free spots will be granted to 22 WSOP Circuit winners from around the world, 22 more to the top points earner at each Circuit stop, and six additional tickets are granted, but the WSOP hasn’t publicly released who get them.

Another 50 free entries are given to the highest point earners throughout the Circuit season. A free ticket into the tournament is worth $10,000.

That is the amount non-freeroll entrants will have to pay to play. However, not just anyone can pony up the $10,000. The remaining competitors will be among the WSOP World Ranking’s top 100. These players are ranked based on points accumulated in all WSOP events, not just Circuit stops.

Poker players on the top 100 are, obviously, not required to buy-in. But, if they do, they won’t pay any rake. The entire $10,000 goes straight to the prize pool.

The WSOP has another perk in store for those earning a free entry. Free travel will be provided and a free room at Harrah’s.

The WSOP Global Casino Championship has some striking similarities to the WPT Tournament of Champions which takes place later this month. That event will conclude the 2015-2016 World Poker Tour season.

Both major events require players to earn a spot. WPT Main Event champions, past and present, can enter the $15,000 buy-in WPT Tournament of Champions. It is an invite-only event and will take place at the Seminole Hard Rock Hotel & Casino in Hollywood, Florida.

The WPT and WSOP are the two biggest poker tournament organizations in the world. Both now culminate a season by bringing back winners from events held across the globe. Brilliant minds think alike.