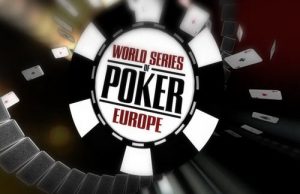 Annette Obrestad was the first ever winner of the WSOP Europe Main Event. (Image: pokernews.com)

The World Series of Poker Europe wasn’t held last year, the first time since the event began in 2007 that a year went by without a European branch of the world’s largest tournament festival.

But WSOP Europe will be back in 2015, this time in a new location and with plenty of gold bracelets for the world’s top players to battle over.

The WSOP announced the schedule for the 2015 WSOP Europe last week, setting the stage for the October series that will be taking place in Berlin, Germany.

A total of ten WSOP bracelet events will be held, alongside a number of side events and daily tournaments.

The seven-day tournament has a storied history, with players like Annette Obrestad, John Juanda, and Phil Hellmuth having won the Main Event in previous years.

In total, the WSOP Europe will feature seven No Limit Hold’em tournaments out of the ten bracelet events being held.

However, there is a little variety available: two Pot Limit Omaha tournaments are being contested, and there is even a mixed event on the schedule.

This year marks the first time that the WSOP Europe is being held in Germany, having been hosted by casinos in the UK and France in previous years.

However, WSOP Executive Director Ty Stewart says that it is a natural place to host Europe’s biggest poker series.

“Germany is truly a hotbed for poker talent,” Stewart said. “As home country to our reigning Player of the Year and 2011 World Champion, we look forward to discovering new names ready to perform on poker’s biggest stage.”

Stewart said that there were logistical reasons for the choice as well.

“Berlin became a logical choice city for WSOP Europe given its proximity to all of Europe,” Stewart said. “We believe this truly will be the best organized and contested WSOP Europe ever.”

Player of the Year Race Could Be Decided in Europe

The WSOP Europe will likely attract some of the top players from the main WSOP in Las Vegas, particularly those that are in the running for the WSOP Player of the Year award.

Points from WSOP Europe count alongside those obtained in Las Vegas, meaning the October tournaments in Europe often decide which player comes out on top in the race.

The first WSOP Europe, hosted in 2007, marked the first time that a WSOP bracelet-awarding event had taken place outside of Las Vegas. In 2013, it was joined by the WSOP Asia-Pacific, which took place at the Crown Casino in Melbourne.

However, WSOP officials soon determined that having two additional tournament stops during the year was perhaps one too many.

Beginning in 2014, the WSOP Europe and WSOP Asia-Pacific were scheduled to rotate each year, with Asia-Pacific hosting the secondary WSOP events in even years, and Europe hosting in odd-numbered years.

The main WSOP festival in Las Vegas will begin on May 27.