The bubble burst on Day Three of the WSOP Europe Main Event, leaving just 46 players to return on Wednesday. Still alive in the field at King’s Casino in Rozvadov, Czech Republic, are the defending champion Kevin MacPhee with an above-average stack (653,000). 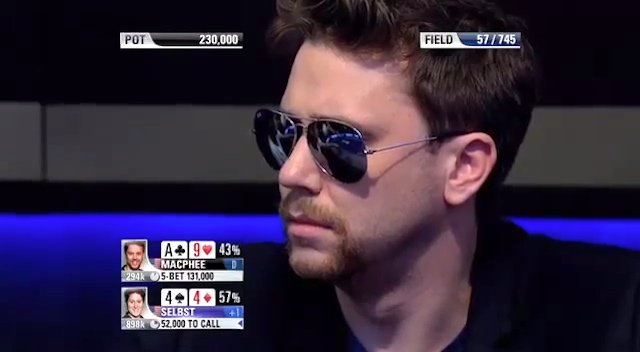 MacPhee is Idaho’s all-time winningest tournament player with more than $5.5 million in lifetime cashes. He won this biennial event in 2015 in Germany, the last time the WSOP Europe was hosted.

But even if he goes back-to-back, MacPhee might still always be known as the guy who made one of the biggest donk plays ever to bust his friend Vanessa Selbst at the 2012 EPT Berlin, causing the PokerStars pro to blowup and question their friendship. 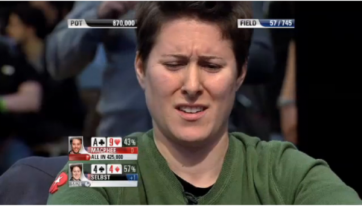 But with Game Theory Optimal out the window, the race was on. An ace hit the flop, and from there no two-outer or runner-runner anything arrived, leaving a frustrated Selbst sent to the rail.

“That was the f*cking worst play I’ve ever seen,” she told her girlfriend as she exited the casino. “He goes after me every time and I don’t know why. He’s a friend of mine, you can put that on TV, it’s the worst play ever. I don’t know why a friend’s going after me, but he does it, every single tourney.”

With that sort of play, and reaction, you’d think she were up against James Woods.

The €10,350 buy-in, series-ending tournament began with 529 players, all hoping to get their hands on the €1,115,207 1st place prize money. The money bubble was set with 80 players getting paid, and by the end of the day, the tournament was down to its final six tables.

The money and the bracelet are all that is left to play for, as if that isn’t enough to motivate the remaining players. WSOP Player of the Year points are no longer relevant now that Chris “Jesus” Ferguson has wrapped up the award, albeit to the dismay of many in the poker community.

Kristen Bicknell, a two-time WSOP bracelet winner and Partypoker ambassador, has the largest stack among remaining women, with just more than 1 million chips. Maria Ho has a smaller stack (391,000), but is more than capable of rallying to become the first woman to win this event since then-18-year-old Annette Obrestad took down the Main Event in 2007 to become the youngest bracelet winner ever.

Also still chasing the European title is WPT Season 13 Player of the Year Anthony Zinno, a regular on the high-roller circuit. The Massachusetts native who dresses to impress at every tournament has some work to do. He is just 41st in chips (234,000).

We can’t close out this article without mentioning Parker “tonkaaaa” Talbot, one of the most popular Twitch poker live streamers, and his impressive run.

Talbot, an 888poker pro, made it through Day Three with 434,000 chips. He’s a multi-table tournament specialist, but has minimal live experience. If tonkaaaa were able to pull off a win, he might have to change his Twitch brand to something other than “Team Never Lucky.”