WSOP Day 48: Martin Jacobson Back on Top for Final Day 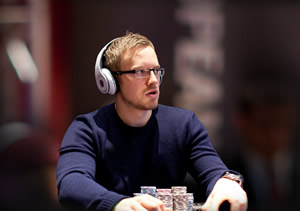 Martin Jacobson regains control of the 2014 WSOP Main Event, back in the lead for the final day. (Image: bigspring.co.uk)

The 2014 World Series of Poker Main Event has been moving forward for more than a week, and the last day of the $10K buy-in tournament is finally here. Monday will bring 27 players to the tables and end only when the November Nine is determined.

The man at the top of the leaderboard is a familiar name, as Martin Jacobson has been here before. He was the Day 1 overall chip leader at the start of the tournament. He was in 21st place going into Day 3, in 29th place starting Day 4, in 18th place beginning Day 5, and in 14th place going into Day 6. As he heads into the final day, the Swede is back in the lead.

For those unfamiliar with Jacobson, he’s been one of the rising stars of the poker tournament world in the past few years, having accumulated more than $4.8 million in earnings since 2008. He has won tournaments at the WPT National in Dublin, EPT/UKIPT in London, and EPT Vienna, though the major tournament win has eluded him thus far. His résumé is filled with prestigious final tables, however, and they include several from the WSOP.

The Swede now looks to make history as part of the November Nine, but he has to get through a tough day and several tables of players who also want that spot.

As for all of the Day 7 players, they are playing for the first prize of $10 million, but today’s eliminated competitors will have to settle for these payouts:

Stay tuned for the final breakdown of Day 7.

The first three starting days of the WSOP summer finale created this field and prize pool base for the tournament:

Day 5 started with 291 players on Saturday and took that number down to 79 survivors.

Day 6 brought that handful of tables back into action on Sunday in an effort to thin the field further. And that it did.

Payouts began at the $85,812 level. Some of the highlights for those payouts and the subsequent ones of the day were:

That left just 27 players when the clock stopped for the night. A new payout level will kick in at the start of play on Monday, as players are now guaranteed at least $286,900 for their efforts. Increases going forward are substantial, though, so it could be a long day, as play will continue until only nine players are left – the November Nine, to be exact.

The final chip counts at the end of the night showed some familiar names still in play, and the man from Sweden who has been near the top of the counts throughout the tournament is back in the lead. Here are the chip counts for all 27 remaining players:

By this time tomorrow, we will have the names and faces of the November Nine.