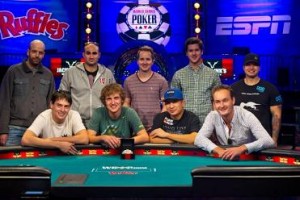 The 2014 World Series of Poker Main Event is nearing its end with only two more days of play on tap before the November Nine is determined. With just 79 players still in contention, play is getting intense for the competitors as well as poker fans.

The chip leader going into Day 6 is none other than Mark Newhouse. The longtime poker player known to some as “Newhizzle” just made the November Nine last year. He finished in ninth place for $733,224. Now, he looks to become the first player to make the coveted final table twice, but nothing looks sweeter than the $10 million awaiting the ultimate winner this year.

Payouts for those exiting the field today are substantial and increase every few spots. The possibilities for today’s finishers are:

We’ll bring updates to you tomorrow morning to recap all of today’s action.

It’s important to note that when the 2014 WSOP Main Event began on July 5-7, the three starting days produced the fifth-largest field for this event in its 45-year history. These were the resulting numbers:

Day 4 thinned the field tremendously, from 746 players, into the money, and down to just 291 players. They returned on Day 5 and played rather quickly to reduce the number of tables much further.

Phillip Lowery was the first player to exit on Saturday, taking home $33,734 for the 291st place finish. Former chip leader Tim Stansifer left soon after in 289th place for the same amount. Other notables who departed throughout the day included:

At the next payout level, some of the departures were:

Some of the eliminations during the next payout level were:

Subsequent pay jumps were quick to roll out, and these players cashed out:

Play stopped late into the night with 79 players bagging their chips. The shortest stack of them all is Maria Ho, the last woman in the tournament and no stranger to deep WSOP runs. Other names in the lower half of the chip counts include Kyle Bowker, David Tuthill, Vitaly Lunkin, Chanracy Khun, and Brian Roberts.

As for the top 10, they are listed as follows:

Play will move forward again today, eliminating the majority of players and bringing just a couple dozen back for the last day of play tomorrow.