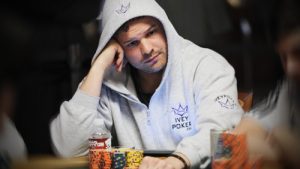 Once the excitement of Day 4 of the 2014 World Series of Poker Main Event subsided after the money bubble burst, it was tournament business as usual to eliminate players and pay them their monies.

The payouts will begin still in the $33,734 level, but quickly move forward. Those who play longer can look forward to these payout levels:

After that, players are guaranteed six figures, but they are unlikely to reach that point today.

What will happen today? Stay tuned, and we’ll give the details tomorrow morning.

When the 2014 WSOP Main Event began on July 5-7, the three starting days produced the fifth largest field for this event in its 45-year history. From these numbers, the goal was to find just nine finalists:

Day 4 started with 746 players with only 693 paid positions available. All tables were playing out at the Rio, and the ESPN cameras and poker reporters were ready to capture the money bubble action.

One of the first players to exit before the money was the last previous Main Event champion in the field, Huck Seed. Others who departed early included Barry Hutter, Allen Cunningham, and Hasan Habib.

With three players eliminated on the bubble, they split the $18,406 money for 693rd place, each taking home $6,135.33. There was one $10K seat to the 2015 WSOP Main Event available for the exact bubble player, and they drew cards for that prize. Cai won the high-card game and captured the 2015 seat.

The jump was a little more substantial for the next payouts of $25,756, and one who cashed was Ronnie Bardah (475th), who set a record by cashing in his fifth consecutive WSOP Main Event. Others in that payout category included Kenny Tran (468th), Raul Mestre (461st), Abe Mosseri (455th), Matthias de Meulder (433rd), and Phil Ivey (430th).

The night ended with 291 players remaining and names like Martin Jacobson, Mikiyo Aoki, and Mark Newhouse in the top 30. As for the top 10, they were listed as follows:

Play will continue today to thin the field, pay more players, and get ever closer to the November Nine.