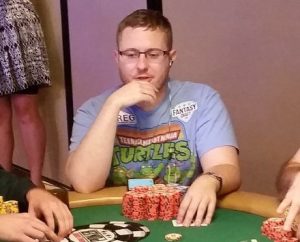 Brian Hastings has already won two bracelets this summer, and is now among the chip leaders in the WSOP Main Event. (Image: CardsChat.com)

The World Series of Poker Main Event is officially into the money.

Shortly before 10 pm on Friday night, the last 1,000 players in the tournament found out that they had clinched one of the most desired prizes in the poker world: a cash in the WSOP Main Event.

As the bubble approached coming out of the dinner break on Day 3, players busted at a rapid pace, and minute by minute the clock displays around the Amazon and Brasilia Rooms counted down: 1,020, 1,010, 1,005.

For some players, this final stage before the money bubble broke was a terrifying experience.

Looking around the remaining field, there were some players who were holding on by the skin of their teeth, grasping desperately to their last few chips and stalling as much as possible in an effort to secure a minimum cash of $15,000 rather than come so close but walk away with nothing. 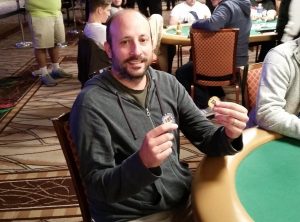 Philip Stark survived with the shortest of stacks, but made it through the money bubble to win $15,000 in the Main Event. (Image: CardsChat.com)

One of those players was Philip Stark, a writer from Los Angeles who had never before cashed at the WSOP.

“What is it called when you’re the opposite of the chip leader?” Stark asked as his tournament clock ticked down, hand by hand.  When hand-for-hand play began, he was down to just 2,000 chips; after the first hand came and went without an all-in and a call, he was left with just two chips worth 1,500.

But on the second hand of simultaneous play, there were two potential eliminations looming.

One became obvious to us in the Amazon Room, where “All in and a call in Tan!” could be heard from a WSOP official.

Daoud Eliminated When Board Double Pairs

That particular hand ended in perhaps the most brutal way possible for Roy Daoud, who held pocket fives and was all-in against the 75 offsuit of Josh Ladines. The flop came a very safe K94, but a turned king left the possibility of Daoud’s pocket pair being counterfeited. That’s exactly what happened, as a river nine gave Ladines two pair with a seven kicker, enough to send Daoud to the rail.

Meanwhile, in the Brasilia Room, there was less drama for Jonas Lauck. On a hand that went to the river, Lauck thought for about five minute before making a call, only for Samuel Gagon to show a nut straight. Lauck had to wait for a few minutes to show his hand as per hand-for-hand regulations, but he knew he was beat, having only a pair of aces.

Ultimately, Daoud would win a high-card draw and earn the honor of coming in 1,001st place, which meant he won a free seat into next year’s Main Event courtesy of sponsor Black Clover. The 1,000 players who cashed each received a limited edition hat from Black Clover as well to commemorate their accomplishment.

When it was officially announced that everyone still sitting at a table was in the money, celebration erupted throughout the field, as many of the remaining players had officially accomplished what could be the biggest goal of their poker careers.

An enormous rail joined in the applause, while tournament officials reminded players that they must now sit at their table once they were eliminated so that a clear finishing order could be determined the rest of the way.

And that brings us back to Stark, who managed to survive through the hand-for-hand process with those 1,500 chips.

He would ultimately triple-up by chopping a pot (such as the joys of having less than a single small blind remaining in your stack when you move all-in), but was eliminated just a few hands later when the big blind came around to his seat, forcing him to put all of his chips at risk.

But it’s hard to imagine that mattered for Stark, whose writing credits include the screenplay for Dude, Where’s My Car?, being a staff writer for South Park, several episodes of That ‘70s Show, and creating Dog with a Blog. 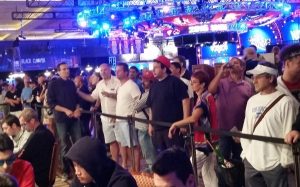 Fans taking in the action at the WSOP Main Event. (Image: Cardschat.com)

All of the excitement around the bubble eventually gave way to a focus on the next big chase: players attempting to make deep runs into the Main Event, and ultimately to reach the November Nine.

By the end of play on Friday night, just 661 players were still in contention, with Day 2 chip leader Amar Anand still holding the lead at the end of Day 3.

Anand is one of just three players over the one million chip mark, and the other two players at that level both have some measure of WSOP success. Joseph McKeehen, who sits in second place, has two WSOP Circuit rings and eight WSOP cashes, including three just this year.

But all eyes will be on Brian Hastings, who currently sits in third place.

The three-time bracelet winner is having a monster summer, having already won two bracelets (in the $10,000 Seven Card Stud Championship and $1,500 Ten-Game Mix events) and looking to make a very deep run at the least, and potentially win an incredible third bracelet of this series if he can continue to accumulate chips over the next few days.

No Shortage of Big Names in Field

There are plenty of other notables who are still dreaming of coming back in November as well. Justin Bonomo has nearly 750,000 chips, while Matt Glantz is well over the 500,000 mark. 1993 Main Event Champion Jim Bechtel is also over half a million chips; Bechtel hasn’t cashed at the WSOP in nine years, but is certainly making his presence felt in this tournament.

As we move down the chip standings, plenty of other names you’ll recognize are still alive as well. They include (but are certainly not limited to) Men Nguyen, Christina Harder, Jared Jaffee, Dan O’Brien, Daniel Negreanu, Joe Hachem, Jake Cody, Antonio Esfandiari, John Racener, Davidi Kitai, Vivek Rajkumar, JC Tran, George Danzer, Ryan Riess, Shane Warne, Jonathan Duhamel, Phil Laak, and Phil Hellmuth: the list goes on and on, potentially setting up some amazing tables as the field continues to narrow over the next few days.

Saturday will be a full day of play in the Main Event, as players start to climb the prize ladder and the field shrinks even further.

For many players, Day 4 will be when the tournament really kicks into gear: bust out, and you collect a relatively small prize, but chip up, and you may position yourself for one of the largest scores of your career.

It’s sure to be an exciting, action-packed day, so check in again tomorrow to find out who is still alive in the hunt for the $7,680,021 first prize!