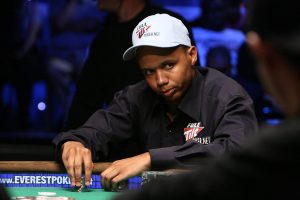 The inimitable Phil Ivey is leading the Main Event pack at WSOP at start of day. (Image: WSOP)

The 2014 World Series of Poker Main Event will enter Day 4 today, which is one of the most exciting days for players, fans, and media alike. It is the day that the top 693 players will be rewarded for several grueling days of tough play with the guarantee of a payout.

All players ponied up $10K to enter the tournament, and the minimum payout will be $18,406 for finishing in 622nd place through 693rd place. Payouts then jump as follows:

Payouts increase incrementally from that point. Play also moves much more quickly as the money comes into the picture.

As the day begins, though, expect tight play from quite a few players. Experienced players will likely try to exploit the tighter players on the bubble, and play will slow tremendously during hand-for-hand play so as to capture the action on camera and ensure that no eliminations are overlooked.

The pain of the first few bustouts of the day on Friday will soon be overwhelmed by the applause and joy of the top 693 players declared in the money. We’ll have the details of it all tomorrow morning.

When the 2014 WSOP Main Event began, the three starting days produced the fifth-largest field for this event in its 45-year history, which was proven by these numbers:

All of the fields combined at the start of Day 3 to play further. It began with 817 players from Day 2A/B and 1,047 from Day 2C, which totaled 1,864. Play reduced the field significantly, and that resulted in the closing of the extra ballrooms as the ever-diminishing field eventually moved to the Amazon Room at the Rio.

Players like Humberto Brenes departed early in the day, as did actor and comedian Kevin Pollak. As the day progressed, most of the previous Main Event winners also departed: Johnny Chan, Robert Varkonyi, Chris Moneymaker, and reigning champ Ryan Riess. Huck Seed remained and ultimately finished in the middle of the pack when play stopped.

The original chip leaders for the day fell a bit from their positions, as Phil Ivey finished the night in 74th place and Tim Stansifer took a spot in the middle of the field.

The field thinned faster than expected, and play stopped early. Not only did the tournament staff not want to hit the money bubble at a very late hour, but the ESPN crew wasn’t prepared to begin filming until Day 4, and that footage should include the money bubble. So, play stopped with 746 competitors holding chips.

There were some big names in the top 50, including Emil Olsson, Martin Jacobson, Kenny Tran, Ali Eslami, John Kabbaj, Griffin Benger, and Dan Smith. But the top 10 consisted of new faces, listed here as follows:

The WSOP Main Event will play into the money and on until the required number of levels are played for the day.