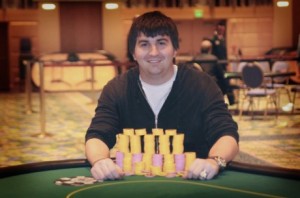 Joe Kuether has what it takes to win on the WSOP Circuit. But can he do it on a bigger stage? (Image: PokerNews.com)

The 2014 World Series of Poker Main Event was moving along but still at the beginning stages. Some players gathered Tuesday to thin that portion of the field, and others will do the same today.

Every day is a mixed bag for fans of the WSOP Main Event, but the players experience the toughest ride of all. Dreams are crushed for some, and hard work allows others to put chips in a bag at the end of the night and move forward to fight another day. The Main Event is a marathon of a tournament, and it’s only beginning for players still in it. Others will have to wait for another opportunity and watch this play out in the distance.

Meanwhile, the two leaders in the WSOP Player of the Year race exited the field on Wednesday. Top-ranked Brandon Shack-Harris and second-place George Danzer both exited the Main Event, meaning a number of other players are still in contention. At the moment, the POY leaderboard is as follows:

This list could change as the Main Event moves forward through the money.

Keep your eyes here for a recap of the Day 2C action and more on the POY race.

When the three starting days of the 2014 WSOP Main Event were combined and the numbers were tallied, these were the final numbers:

There were thousands of players still in the running for that outstanding first place prize, too many to bring together quite yet. Tuesday offered a chance to thin Day 1A and Day 1B fields, so the former gathered 505 players in the Amazon Room, and the latter spread out 1,428 players in the Brasilia and Pavilion ballrooms. Play moved forward through five two-hour levels.

Toward the end of the night, some of the players who fell out of contention included David Sklansky, Matt Affleck, Naoya Kihara, and Igor Kurganov. Others who hit the rail throughout the day included Greg Merson, Michiel Brummelhuis, Vanessa Selbst, Mike Sexton, Dennis Phillips, Annette Obrestad, Melissa Burr, Brandon Shack-Harris, and George Danzer.

The day’s original chip leader Martin Jacobson stayed strong, but there were several players ahead of him when random chip stacks were counted. No official chip counts were released, but these were the top five offered by the reporters on scene:

All of the survivors – an estimated 700 of them – have the day off to beef up on strategy and will return to the tables on Thursday.

On Tap for July 9

The WSOP Main Event will thin the Day 2C field enough to combine all players on Thursday.