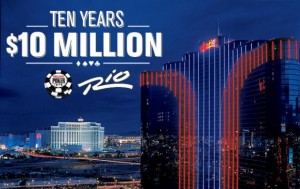 With the fifth-largest ever starting field for a World Series of Poker Main Event, a $10 million guaranteed first prize clearly got everyone’s attention. (Image: WSOP.com)

The 2014 World Series of Poker started its $10K buy-in No Limit Hold’em Main Event on July 5 and completed its third and final starting day on Monday. The registrations were counted late last evening, and the numbers were given. There were 6,683 players, which wasn’t too bad of a number in comparison to previous years:

The 2014 WSOP now ranks as the fifth-largest in history, and the first place prize of $10 million is the second-largest in the history of the tournament, second only to Jamie Gold’s $12 million win in 2006.

There were some big names in the field on Monday, including NBA star Paul Pierce, UFC fighter Martin Kampann, NFL player Richard Seymour, soccer star Gerard Pique, and cricket legend Shane Warne. “Breaking Bad” star Aaron Paul was also in attendance, though only as a fan to support a friend. One legend who decided not to play was poker’s own Doyle Brunson, who chose high-stakes cash games at the Bellagio over long tournament days.

The Twitter tiff of the day involved 2012 WSOP Main Event champion Greg Merson and World Poker Tour Tournament Director Matt Savage. Merson was angry that the WPT decided to host a WPT500 low buy-in tournament at the Aria starting on July 4. The event offered six starting days, daily reentries, and a $1 million guarantee that has already been surpassed. Merson suggested the WPT tried to “step on the toes of the WSOP Main Event,” while Savage defended the WPT by pointing out the drastic buy-in differences and suggested the events are complementary.

Eventually, the WSOP’s own Ty Stewart got into the Twitter battle, which continued into the night. Meanwhile, the WSOP seems happy with its final registration numbers, and the WPT is bringing in so many players that it employs an alternates seating system each day. Both tournaments are successful in their own rights.

Today, at the WSOP, Day 2 will bring together all of the survivors thus far. We’ll bring you as many details as possible tomorrow.

The final of three starting days of the Main Event brought in 3,768 players. When added to the Day 1A total of 771 and Day 1B number of 2,144, the field became the fifth-largest in WSOP history:

The big crowd on the final starting day was its saving grace and brought the totals beyond those of last year. Even so, the $10 million first place prize required the number crunchers to adjust the payouts to accommodate for that big first place promise.

The action was intense throughout the day, and the field was large enough that neither the staff nor the reporters could estimate how many players survived. With an uncertain number of survivors from Day 1B as well, there is only a round number listed on WSOP.com showing that approximately 3,300 players will return for Day 2.

Since there were no official chip counts available, these were some of the leaders presented by the live reporting team:

On Tap for July 8

The WSOP Main Event will thin the field, though it will likely remain a distance from the money bubble.