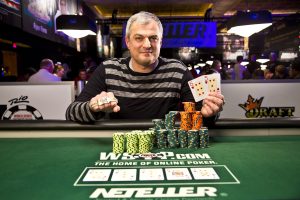 Igor Dubinsky celebrates his Little One for One Drop bracelet and victory. (Image: WSOP)

The 2014 World Series of Poker is in its final stage of the summer. The last of the preliminary WSOP bracelets was awarded on Sunday when Igor Dubinsky won the Little One for One Drop $1,111 NLHE tournament.

The $10K buy-in No Limit Hold’em Main Event championship event started on Saturday with less-than-ideal numbers, but the second of three starting days made up for it with a solid registration number. The grand total now stands at 2,915 players, and it looks like the 2013 Main Event total of 6,352 will be surpassed with the predicted entries for Day 1C. There is even a chance of this year’s Main Event exceeding some of the past years as well, as 2012’s event drew 6,598 players and 2011 had 6,865. An even bigger feat would be to beat the 2010 Main Event tally of 7,319 players, but that may be too much to expect.

Many stories developed during the day, including one that involved Vanessa Selbst calling out men at the Series for using the women’s restrooms at the tournament breaks. The WSOP acted quickly to establish a security presence at those facilities to ensure men did not use the wrong restrooms on the later breaks.

Play kicks off with new names, faces, and security guards for Day 1C today. All will be revealed by the final numbers late this evening.

When the Little One for One Drop started with two initial flights of entries and reentries, it announced these final numbers:

An extra day beyond the four already scheduled was required to finish the action, as it took until late on Saturday to simply set the final table. Play then resumed on Sunday with Jackduyph Duong as the chip leader, Eric Baldwin in a close second, and Igor Dubinsky as the second shortest stack behind Bao Nguyen.

Dubinsky doubled on the 15th hand of the day and continued climbing, eventually doubling again through Matthew Lapossie. He then took 7.9 million chips into heads-up against Theodore Driscoll’s 10.1 million chips, and Dubinsky took the chip lead away in just three hands. Driscoll quickly lost ground and ultimately took second place, as the Ukrainian captured the last pre-Main Event gold bracelet of the summer.

The WSOP Main Event started on July 5 with a relatively small field of 771 players. The second starting day brought quite a few more players to the tables on Sunday. There were 2,144 players on that second flight, bringing the tally thus far to this:

While Day 1A’s numbers were significantly lower than the previous year, Day 1B was strong. The WSOP has already noted that the Day 1C registrations are impressive, and the final numbers will be known late in the evening on Monday.

Recognizable poker faces were everywhere in the crowd on Sunday, and two of them were former Main Event champions – Huck Seed and Dan Harrington. While many big names in poker fell throughout the day, some like Erik Seidel, Marvin Rettenmaier, and David Williams all finished the night with chip stacks totaling more than 100K.

When the clock stopped after midnight, there were approximately 1,300 players still in action. No official chip counts were revealed by 7am the next morning, but these were the top five players listed on the unofficial leaderboard:

On Tap for July 7

Event 65, the $10K NLHE Main Event, begins its third (and final) of three starting days today at noon. The complete tournament numbers should be available at some point after registration closes, likely around the time of the dinner break.