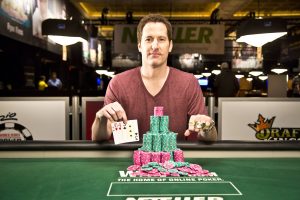 The 2014 World Series of Poker was winding down its preliminary bracelet events and had finally arrived at the start of the WSOP Main Event. As that happened, the Little One for One Drop set its final table and the $10K PLO championship event declared Pat Walsh as its champion.

The $10K buy-in No Limit Hold’em World Championship got underway with a smaller-than-expected field, though WSOP Executive Director Ty Stewart fielded numerous comments with a positive spin. He used Twitter to explain that numerous satellites and players using the July 4 weekend for travel would contribute to higher numbers in the next two starting days, saying, “Let’s count ’em up at end.”

There were some complaints from players who started their Main Event action at very short-handed tables due to an expectation of more players from the tournament staff. Other tables were playing 10-handed, which made explanations a bit tougher. Eventually, players were combined, but some tables were not happy with their initial set-ups, making for some tension in the beginning hours of Day 1A.

Today should attract a larger crowd, so stay tuned for the recap at this time tomorrow.

The Little One for One Drop raised a substantial amount of money for charity, with $111 of each buy-in going to the One Drop foundation. The official starting numbers for the tournament were:

The tournament worked its way down from 885 players to 102 on the official second day of play for everyone, and the third day brought them back in order to play as far down as possible.

The action started with payouts at $3,560 and names like Matt Woodward, James Woods, and Leo Wolpert exiting early in the day. As the day turned to night, players like Joep van den Bijgaart, Brian Pinkus, Asi Moshe, and Xiao Peng followed. Maurice Hawkins departed in 12th place for $40,666, and the tenth place elimination of Kevin Eyster for the same amount ended play for the night.

The official final table was set for the unscheduled but necessary additional day of action, and the set-up was as follows:

The last championship event and preliminary tournament before the Main Event was this PLO with outstanding numbers:

Day 2 thinned the field from 132 players down to 23. Day 3 began with the 23rd place elimination of Jarred Graham for $28,290, and others who followed to the cashier cage included Ted Lawson, David Williams, Sam Trickett, Matt Stout, Leif Force, and Tom Marchese. Alex Kravchenko ended up finishing the tournament in tenth place, in the same hand as Marchese, for $56,973 and just missing the final table.

Pat Walsh had a solid lead over his final eight competitors at that point, and he stayed strong as names like Matt Marafioti and Isaac Baron hit the rail. Walsh took a big lead into heads-up play over Javed Abrahams, though the latter doubled into the lead at one point. Walsh doubled back to the lead, however, and took that a few more rounds into the winner’s circle.

It was finally underway. The most anticipated poker tournament in the world each year is the WSOP Main Event, and July 5 was the day the action started. With three starting days, the official final numbers won’t be available until late Monday, but the first day’s registration numbers were as follows:

Last year’s first day of the Main Event drew 943 players, so the numbers for Day 1A were a bit worrisome, especially considering that a $10 million first place prize will require quite a few more players to get into the action in order to prevent an overlay for the WSOP.

There were a number of previous Main Event champions in the field on 1A, with Joe Hachem leading the “shuffle up and deal” and these gentlemen taking their seats in the field: Ryan Riess, Greg Merson, Tom McEvoy, Johnny Chan, and Chris Moneymaker.

Not many players exited on the day after starting with 30K chips. After five full levels of action, there were still 505 players with chips to be bagged. The full and official list of chip counts was not released, but the official live reporting team offered these five with the largest stacks:

On Tap for July 6

Event 62 will play its final table.